The Quantification of Individual Social Equity

As the echo chamber buzz about Empire Avenue rises, perhaps we should ask questions about what these “influence” tools actually accomplish. From Klout to Empire Avenue, we are literally assigning numbers and now stock values to people’s social network activity, creating a specific metric of influence. Beyond the increasing ethical issues that these games and tools offer, there are many questions they bring to mind. Are the metrics actually useful? Can you quantify what should be qualified? Are we leading ourselves astray? What are the repercussions on individuals’ well-being? 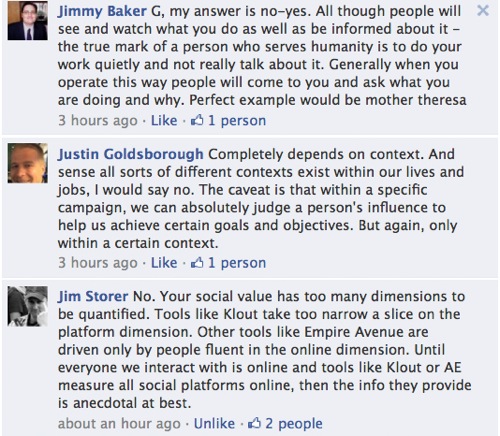 Time and again, it has been proven that social network popularity — follower counts, retweets, etc. — does not necessarily equate to actual influence. In actuality, influence really depends on the strength of community relationships that an individual maintains — strong ties as opposed to weak ties — in online networks. As studies show this influence can be spontaneous on social networks.

One of the best historical examples of real influence was DonorsChoose’s 2008 Blogger Challenge. The blogger challenge pitted some of the world’s most well known bloggers — Tech Crunch, Ars Technica, EnGadget –against each other in an effort to fundraise for students. But despite the big names, the winners were respectable but smaller bloggers like Sarah Bunting’s Tomato Nation blog and Fred Wilson’s AVC blog. All of these blogs arguable could have used their blogs and full Twitter and Facebook networks to their advantage, but the smaller ones with strong community ties won out.

More recent examples of this include the celebrities themselves (forget the digerati in the social media space). Popular celebrities love Twitter, and Twitchange auctions their Twitter accounts as a means to raise money. But of all the big stars that get on Twitchange, its stars like Zachary Levi (who?) and Jeremy Cowart that end up garnering higher bids. A more impassioned, engaged fan base — stronger ties — equals more yield in comparison to the Eva Longoria, LeeAnn Rimes and Tim Robbins of the world. 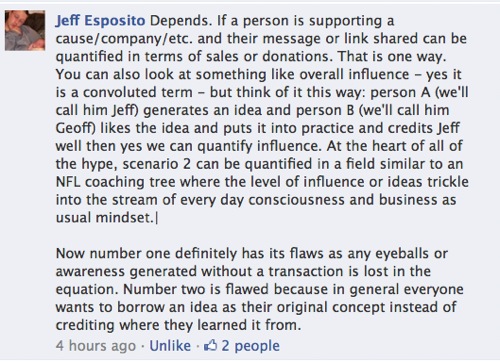 So right out of gate these online influence metrics (and note that they cannot include real world clout) are bound to fail because they cannot quantify what can only be qualified — passion. Strength of community comes from relational engagement and the bonds people feel with individuals within their networks. Popularity — most liked — does not necessarily equate to passion. That doesn’t mean that popular people can’t cultivate impassioned networks, but the two are not the same. Popularity is attention, strength of community is the passion that creates action.

Klout, Twitalyzer, Empire Avenue, all of these metrics are no more than PR 2.0 metrics. They are at best metrics to see who can get the most attention regularly across single or diverse social networks. To build entire social media marketing programs off of them would be a recipe for failure, as attention alone usually does not yield outcomes such as ROI.

The Ethics of Quantification 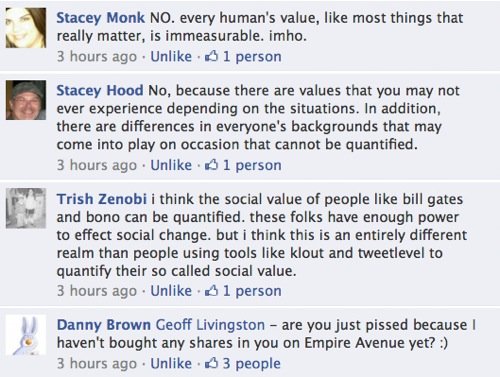 This is not to preach, but looking at Empire Avenue caused feelings of discomfort, and after reflection, it became clear why. It seems wrong to affix a price on people’s heads based on their social network interactions. The pricing of people’s worth has a long hard history in human history; markets of people have often had the word slavery affixed to them. Another nasty historical use of affixing market price to people is prostitution. Both of these historical and still present dark human behaviors make Empire Avenue uncomfortable.

Yes, it’s just a game, a stock market, but not everyone has voluntarily opted in. Yet, transactions have occurred. And look how serious the social media marketing industry is already treating it. It just has many implications that lack mindfulness. So for this blogger, there will be no investing in other voices (much less time) on Empire Avenue. Just like personal brands and corporate brands, the concept does not translate well.

Assigning a number regardless of the specific social network measurement still has implications that can hurt people. Consider that Klout is now being indexed by Google, and is coming up on the first page of some searches. Will important decisions like hiring be based on Klout scores? Isn’t this the same as not hiring someone because of a mediocre credit score? 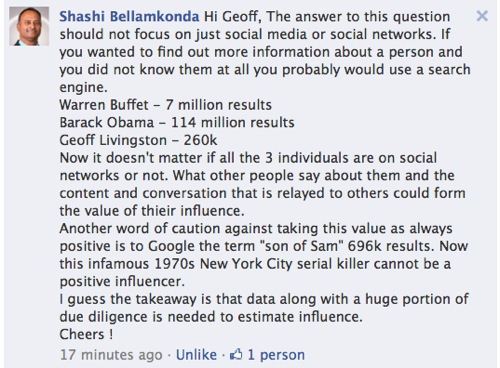 Further, the ties between social media communicators and their activities as participants on these networks raises additional questions about ethics. Whether it is Klout Perks or simple pitches to boost stock value, can these individuals be considered objective in their praise?

Community managers and social media marketers should be careful, and leery of quantifiable influence metrics. They can provide a starting point for influencer relations programs, but they can not reveal what important qualitative community submersion brings. Further, they are not a holistic representation of social media, and how to market within them from a strategic perspective.