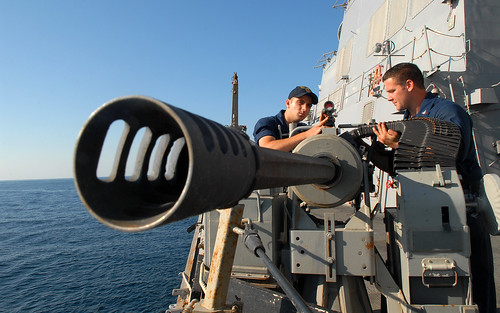 Image by the U.S. Navy

A movement exists to quantify everyone’s social media strength across diverse social networks and blogs. This widespread strength is a sign of true influence, argue social media gurus. Perhaps from a mass consumer market or a top influencer’s perspective, a “machine gun” approach towards influence makes sense. For most, addressing only widespread influence puts an organization into a position of weakness. A vast majority of companies and nonprofits must cultivate specific vertical markets, and specialized media and communities, just like a gardener tending his/her specific plot of land.

Rare is the brand that has the luxury of shooting across all markets with blanket approaches aiming for only the most “influential” voices. This is in essence a PR method, treating social media voices like large broad based media, and using them to broadcast to markets. Undoubtably, this top down approach creates a lot of attention, but is it effective? Does it produce desired outcomes?

Research shows that such approaches fire many more blanks than hits. In actuality, contagious moments occur online when multiple voices pick up a topic, and start discussing it. The buzz trickles up and then out, suggesting maximum impact occurs by seeding both the top and the bottom alike.

So much of social media is relational. People may retweet and give attention to the influencers, but they respond to the voices within their trusted sector. The difference is 90 percent trust for friends, versus 70% for general consumer opinions, according to Nielsen. Top down voices may spark conversation, IF you can get their attention, but they may have no relevancy within the sector (hello, Malcolm Gladwell). The best tactical approach is to also focus on the smaller, but more knowledgable voices within a sector.

In the interview for The New Battleground for Politics, GOP director of social media Todd Herman said the party specifically focused on diverse voices of varying influencer within the community to seed the fire Nancy Pelosi campaign. There was not a mention of Michelle Malkin. The effort went viral, raising $1.6 million on $20,000 budget, not to mention all of the fantastic impressions.

Mass influence metrics are destined to fail. While someone may have strong pull across social channels and rank well on an influence metric, they aren’t necessarily influential within a specific vertical. Meaning that someone may have a wide reach, but that influence isn’t deep enough to have an effect on core communities. It’s like rain falling on the roof. The water never gets in.

Instead, organic approaches to cultivation are needed with influencer relations.
Online communicators need to dig deep into their communities, and work to build relationships over time within the community. That means actual participation with and manual verification of potential desired relationships.

How does one begin? Start with applying David Sifry’s magic middle influencer theory to your community. Back in 2006, those were the bloggers who had 20-1000 other people linking to them. While these metrics are not as applicable in the world of Facebook and Twitter, the principle is the same: Find the voices who discuss and/or curate relevant topical community knowledge and have their own pull.

These people may not be huge on Twitter, Klout, Facebook, Empire Avenue or any other quantifiable statistic, but they have great weight in their sector. They are the most important people to focus on cultivating relationships with day after day, year after year.

We’re talking about the Amy Sample Wards and the J.D. Lasicas, the Shonali Burkes and Justin Goldsboroughs of the world. These four voices have earned great respect within their communities, but you won’t find them on the top of the A-List. Yet, it is often these voices that break and/or discuss stories first. In tandem with other similar voices, they can create great ripples across their community’s conversations. Ironically, when a story or idea takes off because of the magic middle, often top “influential” voices and the media pick up the thread, the desired effect of the machine gunners.

Similarly, someone may have a very strong LinkedIn presence within their sector, perhaps moderating a large group. They are highly influential to tens of thousands, but because they choose to spend their time on LinkedIn as opposed to Facebook, Twitter, or blogging, are they suddenly not influential? If you need to reach their group but use machine gun influence approaches, you miss the value of knowing specific communities. Again, the vast majority of nonprofits and companies MUST target specific stakeholders. Understanding where the stakeholders are determines influence, not systematic metrics.

This is the exact type of influencer approach Zoetica uses when it plans efforts like last year’s award-winning American Red Cross Crisis Data conference, and prior recognized campaigns. After more than five years in social media marketing, the magic middle form of relationship “gardening” works almost every time. The top down machine gun approach has been hit or miss.

Which influence method do you prefer, top down, organic, something completely different, or a bit of everything?