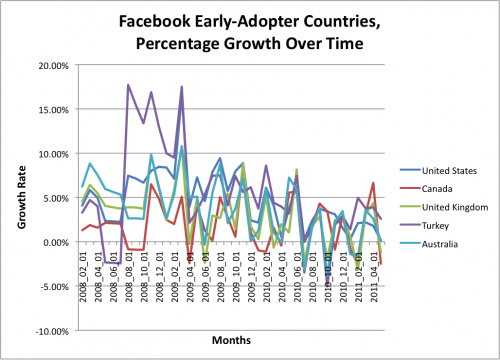 Inside Facebook posted some statistics from their Gold service showing Facebook’s growth hovering just above the 0% mark in five of its most mature markets — the United States, Canada, the United Kingdom, Turkey, and Australia. As the post notes, now that Facebook is used by roughly half the population in most of these countries, the inevitable end of adoption is occurring. Now Facebook needs to keep its users actively engaged to continue driving page views.

Part of retaining its active user base lies in Facebook’s feature approach. Two popular recent additions — Places and the new Groups — demonstrate how Facebook adopts features that are popular on other social networks, and incorporates them into its larger user base. By adapting new popular features, Facebook continues to remain as a relevant social network of the times.

In many ways, this strategy is reminiscent of McDonalds‘ approach to adopting popular items from fast food competitors. As this approach has paid off for “the Golden Arches” with longevity, the copy and incorporate strategy works for Facebook. Consider the success that Places is currently enjoying against mainstays like Foursquare and Gowalla.

Also consider that in spite of a text heavy user interface on its desktop/laptop web interface, Facebook appears to have successfully transitioned to mobile. According to research from Dan Zarella, roughly one third of all Facebook posts are occurring on mobile platforms. Of those mobile postings, a majority of those come from Facebook’s mobile web interface with the iPhone, Android and Blackberry apps roughly even for a distant second place.

The ability to successfully adapt new features and transition to the access method of the immediate future indicates Facebook’s market leadership will likely last for the foreseeable future. Even given its current plateau, the social network is still owns 50% of market share visits with its nearest competitor YouTube taking 20%.

What do you think of Facebook’s recent plateau?