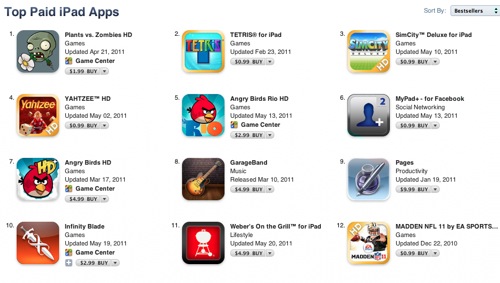 When you look at the iPad app store, one thing becomes clear very quickly. Social networking is not the most popular use of the iPad. Far from it. In fact, just one of 12 of the top paid iPad apps over Memorial Day weekend (as pictured above) was social networking related. The vast majority were games, with a sprinkle of BBQing, music and productivity joining MyPad+ for Facebook.

Consumer use of social media on the iPad reflects some startling statistics that show social’s impact on daily consumer life is less than one would think. In fact, only Facebook and YouTube get any serious attention, between 20-50% of Americans use them regularly (depending on interpretation). The rest of the wide variety of social tools are well, niche social networks.

So, has social in fact been relegated to a supporting form of online media? Is it the relationship tool and feedback line of the web, really just a feature set for online marketing? If current online media usage is any indication then one would have to conclude yes, social is an important, supporting set of online media. 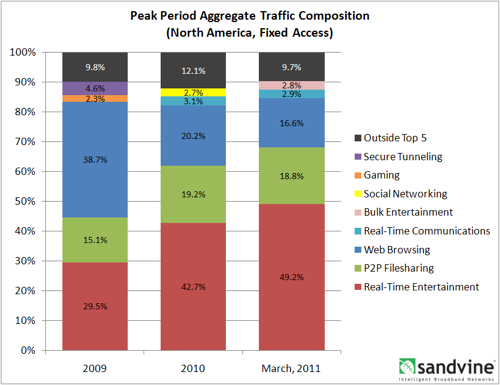 A recent study by Sandvine shows that social networking doesn’t even rank in the top five bandwidth activities online though real time communications (chat) does. In fact, social networking looks like it peaked in 2010 according to the chart above. Of course, this measures bandwidth use, and peer to peer file sharing and real time entertainment (like Netflix) are bandwidth hogs. Social media tends to be text -based, thus it is not bandwidth intensive.

Still the indicators from the variety of data sets point to a conclusion: Social media is not the principal actor in online media. Does this mean we are in a bonafide hype bubble? Or perhaps people don’t want to talk on social networks a majority of the day, just for proportionally smaller parts? What do you think these data sets mean?