NASA Tweets as the Shuttle Sunsets 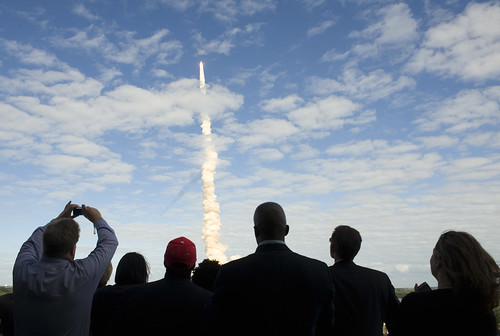 Sometimes shorter is better. “Houston, Tranquility Base here, the Eagle has landed” and its follow-up “That’s one small step for a man, one giant leap for mankind,” manage to capture the moment, both for those of us old enough to remember the first Moon landing and for those who will follow us.

Both of these tightly worded statements share in common brevity and directness that still convey the larger historical drama. They are like Tweets from the pre-Internet era.

On top of whatever else is said about Twitter – that it’s a global conversation, that it breaks news and undercuts traditional avenues of information – it forces users to be as direct and concise as they can be. There’s no room for excess verbiage in a 140-character tweet.

More than any other public institution, NASA has embraced social media, both for itself as well as to bring the larger community of space enthusiasts and armchair astronauts into the conversation about space exploration.

Most importantly, especially for those of us who follow the various NASA Twitter feeds, a sense of the wonder of work and life in space comes through so much stronger in a Tweet than in a dry press release or official document. There are also more than 150 NASA-related Twitter accounts, everything from astronauts currently serving on the International Space Station (@astro_ron, @astro_aggie), on current Shuttle missions (@astro_ferg, @astro_doug), NASA administrators (@Lori_Garver) to current and historic missions (@MESSENGER2011, @NewHorizons2015, @marsphoenix, @voyager2).

Every day, thousands of followers see Astronaut Ron Garan’s photos taken from the International Space Station. Others follow the progress of the New Horizon probe on its way to Pluto. One of the most widely re-tweeted Tweets was the Mars Phoenix’s announcement that it had discovered evidence of water on Mars. A complete list of NASA social media accounts is at http://www.nasa.gov/connect/.

NASA now holds regular tweet-ups (hashtag #NASATweetUp) at the Kennedy Space Center, at the agency headquarters in Washington and at its many research and development centers throughout the country. These tweet-ups are an important part of NASA’s outreach to the space community and the larger world.

More than 20 Tweetups have already been held since 2009. The next one is scheduled this week, July 8-9 at the Kennedy Space Center for the launch of Atlantis – the final launch of the Space Shuttle program.

The impact of a single NASATweetUp can be enormous in terms of educating the larger community on Twitter about NASA and its goals of space exploration. According to NASA – a single Tweetup event can generate 4,750+ tweets in three hours and 40 million impressions. The hundreds of participants in the tweetups that have already happened have more than 3 million combined followers. A private group on Facebook for the alumni of the various NASATweetUps has more than 400 members.

NASA is in the middle of a painful transition, with the Shuttle program ending and the future of manned spaceflight uncertain. Like many organizations in the same boat, it’s finding it more important than ever to keep its community close and informed and to use whatever means it can to tell its story. Twitter is obviously only one piece of the puzzle but it’s become the most visible one.

David Parmet, a social media and public relations consultant, attended the NASATweetups for the final launches of the Orbiters Discovery and Endeavour but has still yet to see an actual launch. He’s holding out hopes for Atlantis in July.