What ComScore Data Tells Us About Google+ 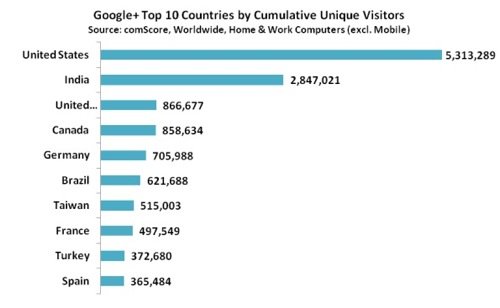 comScore released a report on Friday examining the demographics of the first 20 million people to join Google+. Some of the statistics were not surprising. American users tend to be from technology centric cities, and the overall user base is 2/3 male with a particularly strong age group of 25-34 years old. What was surprising was the international flavor of Google+.

Only 5 million of the 20 million are U.S. based. If you add the 800,000 thousand Canadiens, only approximately 30% of Google+ users are in North America. With strong showings in Europe, India, Brazil and Taiwan, Google+ is clearly an international phenomena.

The international flavor demonstrates the discussion about social media uberinfluencers dominating Google+ is a myth. Almost all of these influencers have less than 50,000 followers, and a great majority have less than 10,000. While perceived to be dominant in this corner of the blogosphere, they represent just one small part of the Google+ community. Even in the North American part of the network, their followings are well under one percent of the community.

Additionally, most people on Google+ believe that Facebook is the big loser in the network’s success. But if you look at the numbers, with 5 million Americans, Google+ has a long way to go to beat out the 50% penetration Facebook has in the U.S. population (more than 150 million). Even at its current growth rate, which is likely not sustainable, it would take Google+ the better part of a year to seriously rival Facebook’s reach.

comScore’s analysis shows a very strong networked effect occurring on Google+, which is indicative that it will succeed in achieving major social network status. However, as the report suggests, the network has to break out of the early adopter
community and into the general population. The next big test will occur as Google+ opens the network to the general public at the end of the month.

Update on Google+ for Business

Reports indicate that Google+ will launch its formal business offering towards the end of the third quarter (mid to late September). The company plans to continue policing businesses that set up branded profiles via personal accounts until then. Per the advisory, published here and on Danny Brown’s blog, businesses should experiment informally.