Chatter about Google+ for business is abound, but other than the SEO benefits, arguments for a pro offering have not been compelling. In reality, there is no formal business offering yet. While Google+ is at or close to 30 million members, they are distributed globally, and are largely technologists or social media wonks. At this early stage, consumer businesses, nonprofits and non technology B2B plays have little to gain from Google+ other than SEO (can you say Squidoo II?).

It’s great that bloggers and corporate content producers can yield strong search results using Google+. It makes a compelling case to integrate +1 technology and sharing within content marketing initiatives. But beyond SEO, most of the business chatter about Google+ is, well, bloggers talking about setting up personal profiles. Businesses need more than that. They need paths towards tangible outcomes and ROI.

Until Google+ launches its business solution, there really is nothing for businesses and nonprofits to do other than to experiment with the existing personal features. The one exception is technology companies marketing to early adopters. Having your social media team get active on Google+ as individuals makes total sense. Dell is an early leader in this sense.

It’s nice that the social media and technology communities are enthused about Google+. For many, it makes life easier and more public than Facebook. But the non-indoctrinated “normal” person isn’t using Google+ yet. 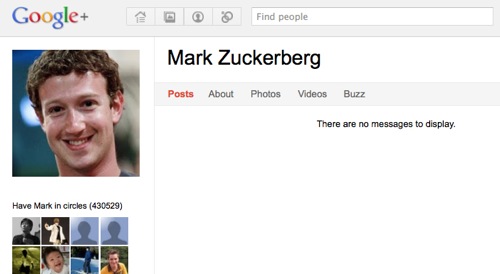 Ironically, the most followed person on Google+ is Marc Zuckerberg. Strange as that may seem, it is emblematic of Facebook’s staying power.

Facebook’s continuing evolution sacrifices individual privacy to serve the larger business community. And make no bones about it, Facebook definitely offers the business community quite a lot. The offering rages from free community pages and social ads to customized contests and promotions and deeply integrated applications.

The most important part of Facebook’s offering is its widespread, global consumer appeal. The social network has more than two times as many active bodies in one place than LinkedIn, Twitter and the fledgling Google+ combined.

Facebook has yet to respond to the Circles challenge to its user interface. It would be surprising if the network that likes to opt in social technology challenges ignores Google+’s innovation. It’s very early in this competition. Really, the thing that Google+ can always beat Facebook on is privacy and an insistence on open commentary.

Both of these second tier networks have more than 100 million active users, and are very mature with loyal communities. Twitter has finally figured out its business model with its new advertising package that retains 80 percent of customers. LinkedIn is an extremely strong B2B-only play with robust Groups, strong HR offerings, and increasingly well-used business profile pages. Google+ needs to determine where it fits in comparison with these two growing proven offerings.

5) No Proof of Concept

This one really isn’t fair given that the professional offering has yet to launch, but there’s no proof that Google+ will be a good play for businesses. Any company or nonprofit that participates in the initial offering will be an early adopter, experimenting with the medium. Most companies don’t feel so publish about testing a new medium with their precious dollars. Instead, they prefer to wait until the medium is proven. And that won’t happen until the end of the year.

Google+ is likely to succeed so stay tuned, but hold onto your wallet until 2012. There is still a lot of hype and uncertainty when it comes to Google+ for business. The exceptions to the rule are those marketing to the early adopter community and content marketers who can benefit from an uptick in SEO courtesy of Google+.