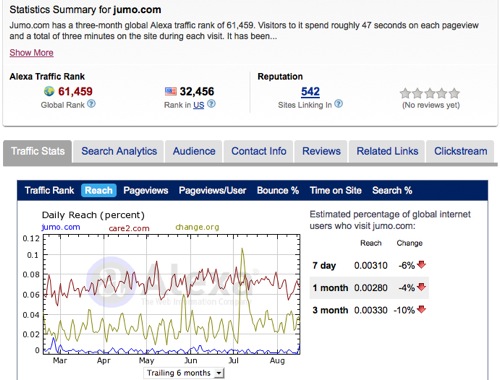 The social change side of the Internet was abuzz last week with the GOOD acquisition of Jumo. Everyone wants to know if the addition of the change media powerhouse turn around Jumo’s bad mojo.

Not much has been heard from Jumo since it launched in the fourth quarter of last year. The site promised to become the next generation gathering place for change activists. As you can see from the above traffic statistics, hype did not meet reality. Mainstays Care2 and Change.org barely felt its presence. 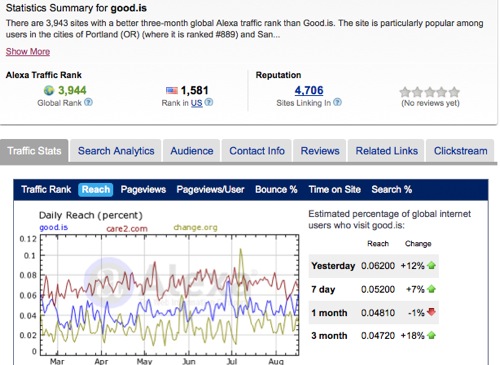 GOOD, however, has a competitive presence. A more social GOOD could become the number one online change network, uprooting Care2 and its 16 million users.

But it’s not as simple as that. Jumo has serious problems, including profitability (or cash positive as it is organized as a nonprofit) and low traffic.

Beyond that, no one has ever really answered what Jumo adds to the competitive mix. When Jumo launched, executives — including Facebook Co-Founder Chris Hughes — briefed dozens of influencers, and ignored their advice. The product launched with bugs, an over-reliance on the Facebook platform, and failed differentiate itself with any kind of distinguishing feature set or functionality. There was no evidence of strategic product marketing. Jumo was dead on arrival, and that’s why its traffic is still so low.

The combination of GOOD and Jumo may have potential, but only if GOOD seriously revamps Jumo’s interface and feature set to make it clear and valuable. Otherwise, the second coming of Jumo will also be dead on arrival.

On a larger scale, the acquisition acknowledges how hard it is to enter established markets with new social networks. New entrants need to do more than offer unclear and undifferentiated services if they are going to lure away their competitors’ communities.