How the Google+ Hype Lost Its Mojo 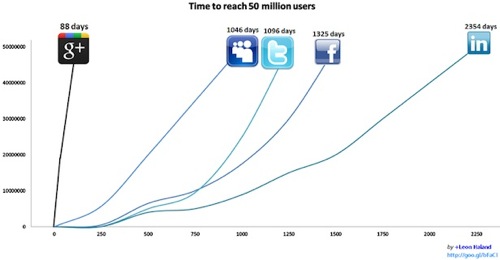 If you read some top social media blogs, it’s clear that Google+ is the hottest thing since the launch of the iPad. Others believe the fledgling social network is dying, with dramatic declines in interactivity.

The truth is that the network seems to be growing pretty rapidly still, especially since opening its doors to the public. Estimates have the network at 50 million users currently. Though no one seems able to discern interaction or retention rates from the earliest adopters, Google+ growth has reignited in September.

Yet perception of the network amongst early adopters has fallen quite a bit. Some of this has to do with retention and frequency of use, but the Google+ blues have deeper roots.

From a marketing stand point, one has to wonder how did the Google+ launch lose its perceived mojo so quickly? Here are three possible reasons:

Google’s cultural approach to product launches is to release the product, and let people figure out how to use it (full disclosure: I have done unrelated work for Google in the past year). This typically less than social approach has created problems with prior social launches.

The Google+ launch is different with much more interaction on both the blog and with community managers. But there is still some remaining cultural impact. Numbers are not well reported. There have been communication snafus with a promised Google+ for Business offering that has yet to materialize (which is fine, but communicate why).

People are unsure of how Google+ is doing because Google isn’t really communicating well. Yet.

It’s clear that Facebook has responded quickly to Google+, and is taking the competition seriously. From video chat to new friends list management to a revamped news stream, Facebook has matched or tried to surpass Google+’s primary differentiators.

While Google+ has made changes to its network during the same time, it has not launched any major new initiatives outside of games. This has lent the perception of momentum to Facebook. In essence, people believe Facebook is evolving while Google+ isn’t.

Further, unlike Google, Facebook is a PR machine. So this perception is one created of attention and noise, too. There is no equivalent of the F8 conference or feature season for Google+. Yet.

The social media expert land grab that occurred with Google+ this past summer was a big turn-off. From audacious statements to webinars to books about Google+ for Business (ironic given that Google+ hasn’t opened its doors to businesses yet), many people in the industry were repulsed by the zeal of digital “49ers” seeking Google+ gold.

The most notable Google+ “expert” Chris Brogan argued that business is open and everyone is free to make a buck. He is correct. That doesn’t mean that it’s attractive or admirable though.

Unfortunately, throwing out the baby with the bath water may have occurred here. Some early adopters left or ratcheted down interaction simply because they were turned off by the behavior of some more well known people in the field.

There are accounts, and then there is usage. Right now Google+ has done a fantastic job of breaking all industry records for new accounts. Interactions and page views seem to be growing, too, if not from the first adopters, then definitely from the sheer volume of people coming on to the network.

At this rate — IF momentum continues AND if continued interaction and retention occurs — it will be hard to deny Google+ as a major tier 2 network by early 2012.

With increased user interaction, more growth and page views, the truth will reveal itself. Thanks to strength of numbers, Google+’s perceived mojo problems will go away. But Google can help the process by opening up more, and continuing to evolve its network in a more exciting competitive fashion.

Businesses and nonprofits should be experimenting with the network. Please keep in mind that only 10% (give or take) of the network’s users are actually in the United States.