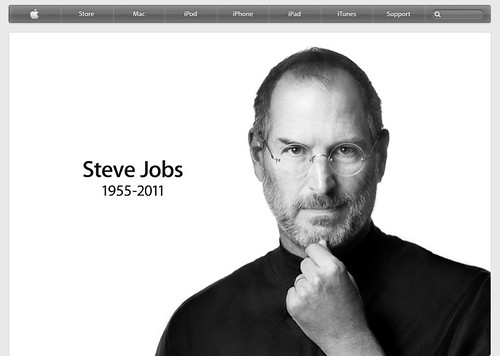 Now it really is time to eulogize Steve Jobs. Perhaps the best thing to say is thank you for all the great innovation he brought to this world.

There are so many things to be said about the great technological innovation he brought to the world during his tenures at Apple and Pixar. From my first personal computer, an Apple 2e, to the MacBook Pro this post is being written on, Jobs has had direct and consistent impact on the way I have viewed and consumed information for the better part of three decades. In entertainment and in work, Apple has been and continues to be a part of life.

There are so many things to say about Jobs and his companies, most notably Apple. Many people will be sharing those insights for the next few days in his memory.

The one thing to add beyond technological and business insights is respect for the incredible marketing machine Jobs built. From packaging and storefront design to masterful multichannel product launches and tense excitement by tightly managed PR, Apple demonstrated best practices in many areas of marketing.

Until Steve Jobs retired, the marketplace was always poised for the maverick tech titan to lead an on-stage unveiling event, packed with journalists, bloggers, and industry insiders. The company even avoided (and still avoids) major announcement fests such as the annual Consumer Electronics Show, instead preferring to orchestrate its own Apple events weeks apart from known industry events. Companies like Facebook and Amazon now ape this technique with some success, but it’s still not as exciting as an Apple announcement.

Launch events are complimented by traditional outdoor, print and broadcast advertising buys, in-store signage and displays, and of course, beautiful, recognizable packaging. The Apple website is tuned to announcements, turning over on launch day with in-depth web pages and videos explaining new products. Emails are sent to customers on launch day, encouraging them to buy.

These ads and direct marketing outreaches are as orchestrated as the company’s public relations efforts. In fact, they create a seamless multi-channel, multi-touch approach that demonstrates one of the very best integrated and repeatable marketing formulas the world has seen.

Yes, the products walk the talk. But many, many times, including Jobs’s first tenure as CEO of Apple, best technology is often not the most popular technology. Clearly, Jobs mastered marketing as time progressed.