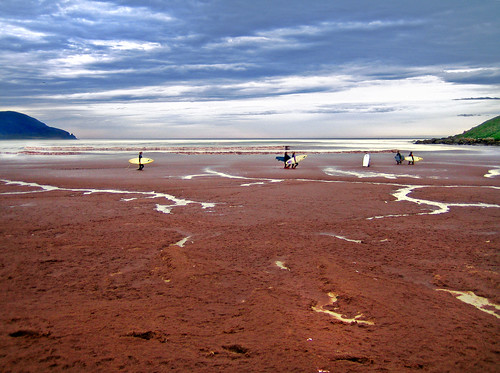 We see many, many novices and intermediates emulating, learning from, and trying to be a top ranked blogger. This is ultimately a strategy doomed to fail, an effort that will only lead to a dogfight for a second tier position in established content markets.

If you read the book Blue Ocean Strategy, you will find a refreshing theory on strategy that focuses on creating your own market as opposed to fighting for market share. This is the blue ocean versus red ocean concept, and it can be applied to content creation.

A red ocean — or in our case, the established blogosphere — is dominated by an established leadership that owns a majority of the market. It is usually followed by a long tail of similar voices that compete on many common aspects — types of content (text), topic (for example, social media marketing), customer (marketing managers), format (blog), and delivery (reader or social networks). As such, it is virtually impossible to grow an established market and therefore new entrants are simply fighting for market share.

When you fight for market share with established leaders, it is very, very difficult to succeed. They have market share already, and as such have inherent advantages.

Consider the Ad Age Power 150 for the marketing blogosphere. Its top ten is virtually the same as it was last year (and the year before that). Even the top 20+ is roughly the same. It’s only when you get into the 50-1130 range that you see real volatility and movement. With estabished loyal readers and word of mouth mechanisms in place (social network followings and RSS subscriber bases), top bloggers are almost impossible to unseat.

A new marketing voice who wanted to break in and create a perception of thought leadership might feel overwhelmed. And they should. They will have a hard time finding success with another marketing blog that copies the best practices and styles of one or several of the top 20.

Instead, they have to create a new way to establish content and commentary that breaks the mold. In essence they have to create what Blue Ocean Strategy calls value innovation with a unique and distinguished offering that customers immediately identify as special and worthwhile.

For example, there are many bloggers who comment on marketing, business and social media. There is only one who does so successfully with cartoons, and that is Gaping Void. Hugh MacLeod’s offering is distinguished in its comedy, delivery (comics, and a strong email program), and has a witty style to it. It hybridizes new media and the comics page. It is unique.