Book Title Revealed: Marketing in the Round 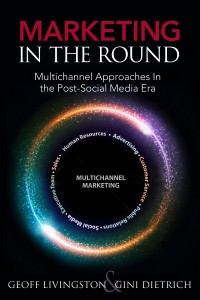 Marketing in the Round by Geoff Livingston and Gini Dietrich

This post is co-written by G Squared (Gini Dietrich and Geoff Livingston).

We finally get to talk about our new book! We joked, early on, that it’s not nice to tell prolific bloggers they can’t write about what they’re writing about. It’s been a challenge, that’s for sure.

It’s time to let the cat out of the bag with our book now listed on Amazon and Barnes & Noble.

Special congratulations again to Gini, who is making her first appearance as a published author. Her post today on Spin Sucks discusses some of the feeling that comes with that.

Generally, Gini’s ability to market has been eye opening. She is stellar, and deserves to be one of the industry’s most renown marketers. I quibble that her name should be first on the jacket. While I have much of theory and strategy down, watching her do her thing on a daily basis has been impressive.

Integration of All Disciplines

Integration or multichannel marketing is an underlying topic within social media, but also one that CMOs are discussing greatly.
Not since the original dot com era have CMOs been under so much pressure to understand how new media integrate into the mix, and how all the parts work together.

There is a great need for information in multichannel marketing. As two practitioners who have successfully marketed in the social and mobile media realms, yet find our roots in the traditional public relations and advertising practices, we believe our book offers new insights into how to build a multichannel program that leverages the strengths of all disciplines, old and new.

A critical part of my thinking is the understanding that social media has arisen, and in many ways has plateaued. There are not many new insights to add to the incredibly thick lexicon of social media texts available in book stores.

A recent IBM study of 1,700 chief marketing officers has some interesting results. It found respondents:

There is a great need for information and an understanding in multichannel marketing.

Move the Conversation Out of the Sand Box

The era of corporate (and general population usage of) social media has entered its maturation and evolutionary phase.

The challenge is no longer how to incorporate social into the marketing programs, but how to move social out of the sand box, and into a role that fits within larger marketing context. In some case it may not fit at all.

We find that role — an important one for grassroots and customer relations — is often overblown.

Marketing in the Round

I remember back in the dot com era I moved from traditional media relations into a fully integrated offering at Stackig, an acquired company served as Monster Worldwide’s Washington, DC office.

During my four year tenure there, I had to learn advertising and recruitment principles in order to sell our integrated offering. We had everybody in the region on the client roster; UUNet, DoD, the CIA, AOL, Northrop Grumman, Lockheed Martin, MCI and on and on.

At this time, I had some great mentors, Victor Watts and Ellis Pines (a Leo Burnett veteran from the Marlboro Man era), who taught me about branding, advertising, and business development. To this day the ability to apply the lessons learned as a journalist turned PR pro turned marketer distinguish my social media campaigns.

Clients are not left in the dust of conversations without ROI or outcomes, nor are the objectives stand alone without value to the stakeholder. Further, dovetailing tactics is a signature, usually seen with an event, but there are other components.

Look at Give to the Max Day, what many dub as a social media fundraising success with $2 million raised. But many overlook the significant PR, advertising, event marketing, guerilla tactics, and more that went into that recipe.

Collectively as G Squared, our approach to integration is to use a roundtable concept…where all disciplines work together to break down the silos, do what’s best for company growth, and work together.

It may seem a bit naive if you haven’t yet tried it, but it works. G Squared have both been working with organizations to do precisely this for years.

It’s not out until May (our final deadline is January 2 and we’re already two-thirds finished writing), but you can pre-order it now.