Dell continues to be one of the most innovative companies out there in social media. Yesterday, on the one year anniversary of its Social Media Listening & Command Center, Jason Falls and I toured the computer giant’s headquarters.

We met with several critical players on the Dell team, from perennial leader Lionel Menchaca to Amy Heiss, program manager for the Command Center. Along the way we learned quite a bit about how Dell evolves with its clients needs, in the United States and globally.

Perhaps the biggest impression made on me was the experimental and open nature of the Dell social team. When I walked into the cavernous room that houses Dell’s social media group, I noted several things:

Dell has become a “socialprise”, and is actively experimenting with the best ways to enable fluid business dialogue in the enterprise, critical to its online success. The company clearly understands that empowering departments to interact quickly extends beyond process. The result is increased access through physical space and location. 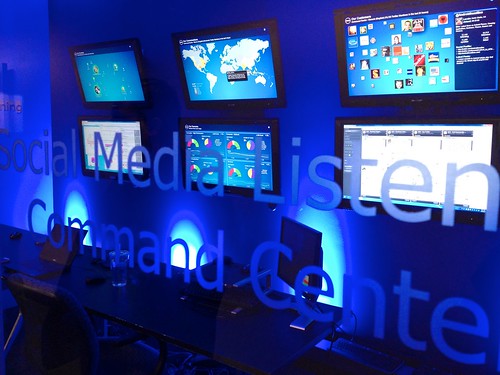 Dell is listening to its current and potential customers in a very organized fashion across a wide range of data points. For example, the above video details influence tracking, just some of the incredible data the Command Center tracks. The diverse data points range from products to conversations to global regions to all the industry players involved.

In conversation with Rajiv Narang, executive director for social media and marketing innovation at Dell, it became clear how analytical this company is. We’re talking the ultimate data geeks here. Dell sees data, conversations, trends and corresponding behaviors, and deeply analyzes to distill knowledge. Then it mindfully addresses its business direction to serve the market. It’s fantastic.

Another factor that became clear was how incredibly social the company has become. In meeting with many diverse players in Dell, from enterprise sales to sustainability and social good, almost everyone of them had been certified in the company’s social media program. Knowledge and practice ranged, but it was clear that the 5000+ employees who have been trained are interested, and see social as a critical component to the company’s success.

It was great to do this trip with Jason Falls, too, who will add his insights next week. Jason is clearly doing really well, and is at the top of his game with the release of No Bullshit Social Media. Congratulations, Jason. You deserve all of the success as one of the hardest working people in the sector.