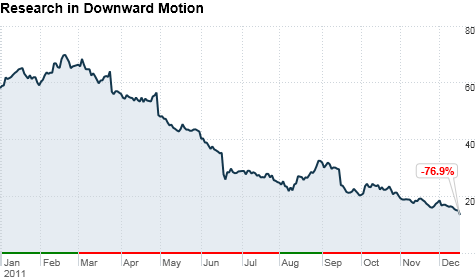 By all accounts, 2012 will be the year that Blackberry’s decline dramatically increases. Most analysts and even parent company Research In Motion’s SEC filings see Blackberry dropping out of the top tier of smartphones, surrendering the market to the Apple iPhone and the many Google Android operating system-based phones.

Because Blackberry has been a very strong brand, one that basically brought the Internet to phones in the form of email and casual web browsing, expect to hear a lot of complaining. People love their Blackberries!

But unfortunately, the company was never able to respond to tactile input technology and the subsequent mobile application revolution created by Apple and then Google. Users have little choice with Blackberry’s increasingly obsolete operating systems if they want a modern smartphone with the best technology.

The decline has been an ugly one. When the iPhone first launched, Blackberry was slow to react, chugging along with its 1.0 email monster.

Finally, after the phone took off, Blackberry began to evolve towards touch screen interfaces. By then Android had launched. While Android is often considered an iPhone knock off, it was extremely competitive from an innovation standpoint and cost effective. It became the iPhone answer instead of a touch Blackberry.

Research In Motion responded by cutting costs to incredibly low levels, which buoyed sales into 2011. However, low costs, a revamped operating system and attempts to build a Blackberry only mobile social network and application marketplace have failed to stem the iPhone Android tide.

The final blow appears to be the failure to deliver yet another new operating system — Blackberry 10 — until late 2012. With market share rapidly deteriorating, Blackberry needed a turn around now, not in nine to 12 months. And so it seems apparent that in 2012 we will be hearing a lot about Research In Motion and Blackberry’s fall from grace, and their desperate last attempt to stay relevant.

Personally, I have never really liked the Blackberry platform. Instead, I preferred a Palm or Windows phone during the 1.0 era, and the iPhone and Android phones in the 2.0 era. 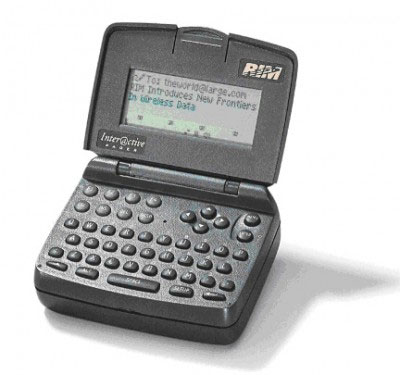 However, as a wireless reporter in the late 90s, I remember Research In Motion when it launched. The original Research in Motion device, a Bullfrog, was this innovative clam shell pager with a QWERTY keyboard. It was the size of a Big Mac!

Soon after they added voice capability, and became a start-up legend offering a phone that beat the big boys like Ericsson, Nokia and Samsung. The Blackberry revolutionized telecommunications, just as its current nemesis the iPhone has. It’s place in history should not be forgotten.

What are your memories of the Blackberry?