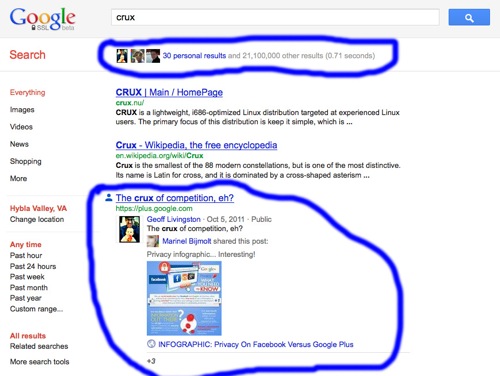 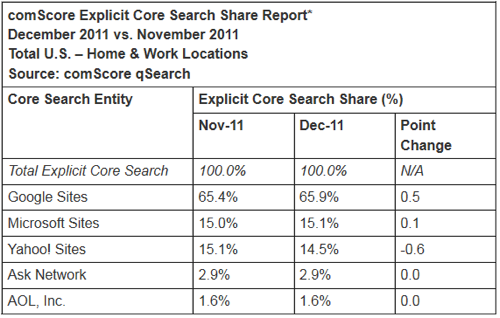 Search drives an incredible amount of traffic to Google’s site. According to Alexa, Google is the number one trafficked site in the world, followed by number two Facebook, and third, Google’s YouTube property. This dominance in overall web traffic allows Google to run its very profitable advertising business.

From a web marketer’s perspective, these tops sites are must have referrers, thus the heavy focus on advertising. But of the ad properties, Google’s Ad Words is considered a much stronger play than Facebook’s social ads, which most Fortune 500 brands view as a weak play.

Secondly, while adding personalized results to Google search has been an ongoing evolution over the past few years, this move puts Google+ in a preeminent position over its social network brethren. No other major social network is indexed to offer larger social web context.

Right or wrong, this puts Google+ on a pedestal in the larger social web ecosystem, causing it to literally influence 2/3 of all searches occurring on the social web, while the others have no influence. This shift has sparked widespread discourse amongst tech bloggers. In some cases, tech pundits have wondered out loud if Search Plus represents an extinction event for other social networks.

Just hours after Google announced the move Twitter stated that Search Plus was bad for the public. Further, Twitter said that finding relevant information will be hard thanks to the exclusion of tweets from Google search results. However, Google responded by revealing that Twitter chose to close its network to search last summer. 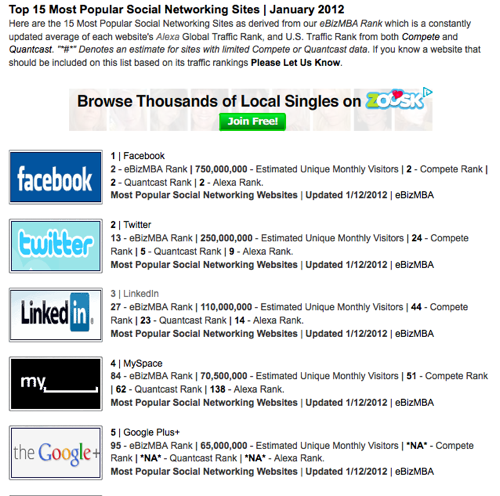 Regardless of the he said, she said, the move does overinflate the importance of Google+ in the context of its place in the larger social web. But, Google says it will change if Twitter or Facebook allow their sites to be crawled for indexing.

In an interview featured on Search Engine Land, Google algorithm wiz Amit Singhal said, “Facebook and Twitter and other services, basically, their terms of service don’t allow us to crawl them deeply and store things. Google+ is the only [network] that provides such a persistent service. Of course, going forward, if others were willing to change, we’d look at designing things to see how it would work.”

Beyond Twitter, the Search Plus move sparked outcry within the larger tech pundit space. Some have dubbed it, “Too much, too soon,” disliking the sudden force-feeding of Google+ to the marketplace.

This is a common declaration amongst pundits since Google began integrating Google+ across all of its properties. At the same tim, others are all for the rising social network. Meanwhile, people feel drained on time, and are gravitating towards the one or two social networks they like best.

While pundits may not like Google for its moves, the company has thrust its social network into the top five in the world, and is likely to surpass MySpace by the end of the first quarter. Google has done what it had to in order to make Plus a success.

The inevitable integration into search simply adds incredible value to Google+ that most web marketers will not be able to resist. Google+ may not drive the most direct traffic to your site compared to other social networks, but through the Search Plus algorithm it has far a greater impact on search than Facebook, Twitter or LinkedIn.

This makes Google+ the easiest way to influence your company, brand or product’s search results of all the various types of social media. Suddenly, a handful of plus ones means more than scores of retweets. This imbalanced impact on search is reminiscent of then second tier social network Squidoo’s lock on page rank in the mid 2000s.

Most professional web marketers won’t be able to resist impacting their search results through Search Plus. As a result, brands will push Google+ and drive more traffic to the social network, which in turn will strengthen the network’s overall traffic. Search Plus creates a self fulfilling engine of activity for Google+.

Search Plus will likely force Twitter (and possibly even Facebook) to index its users’ public posts. They will have to open up to stay relevant.

Additional social network data would provide more context for search and other uses of public social data than Google+, which in spite of its growth is barely a second tier social network based on traffic. And that would be good because Google+ is not representative of the larger social web population, instead representing a very tech savvy, male oriented demographic. In the interim, Search Plus is a game changer for communicators who can see its impact on the larger ecosystem.

What do you think of Search Plus?