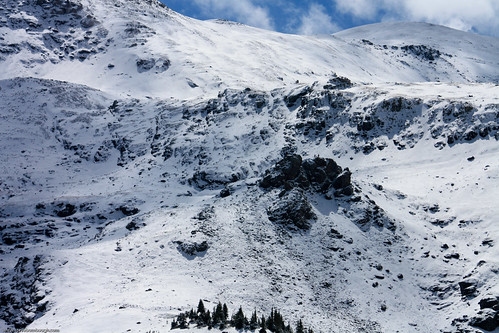 You probably know the legend as Bigfoot, the yeti, or the Abominable Snowman. The mysterious, gigantic hairy biped eludes human contact in mountainous regions, vying for its own survival. Thrilling and scary at the same time, northern cultures dream of this elusive and powerful icon of the unexplored wilderness.

Similarly, PR and marketing types alike dream of the influencer, the person who will trigger an online contagion (a.k.a. viral event). They desperately look for that powerful personality who will become their brand hero.

Finding the ultimate influencer eludes marketers in spite of modern theory. Regardless of measurable influence tools like Klout or the not so revolutionary definition of the influencer as someone who inspires action, today’s influencer theories and approaches still fail to identify the online bezerker.

You can just imagine it: “We saw a Klout score of 73, after a hard trek and much pursuit, he blogged about us, and nothing happened! He wasn’t the abominable influencer after all!”

What about the times when a contagion does happen? The abominable influencer seems to appear out of nowhere to become the central focus of an unexpected online public moment.

We call these people influencers because after the fact, only because they have been identified as someone who can cause such a moment. But just like “The Pitch” influencer Mac Lethal and Egypt revolutionary Wael Ghonim, these individuals are unlikely to reproduce that magic which caused them to become celebrated in the first place. But they will certainly reap the rewards of setting a contagion off first. 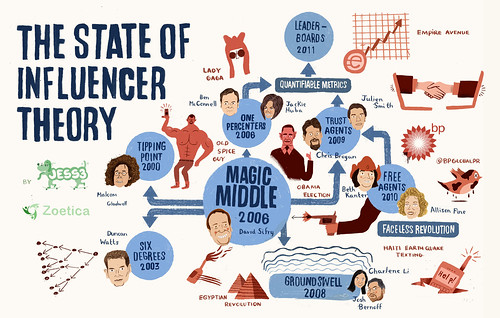 As the above chart shows, influence theory goes back to Gladwell. If you include PR-based thought leadership memes you could argue it goes back to the 60s.
Much of today’s top down uber-influencer theory highlights individuals who can sway great actions. These people have significant online followings; ten of thousands, hundreds of thousands, even millions. They are marked as action creators due to retweets, comments, likes, impressions, perhaps even the ability to make a topic hot.

People read these folks for professional or personal insights. While they may be “social,” their followings don’t really know them. They are not truly friends with their community. They have evolved from peers to become online personalities, modern micro media celebrities if you would.

While these people may be the harbingers of news and information, they are not as trusted as peers. The relationship and emotional tie may seem real, but in actuality it’s parasocial. These personalities are removed from that close friendship that empowers the word of mouth gold that communicators are so desperately chasing with their influencer theories.

Contagions are usually started by peers. One peer telling another, usually starting somewhere small, spreading, until it trickles up and the so-called influencers start noticing, then continuing to spread until the kernel of hotness becomes a raging contagion across the interwebs and the media.

Gladwell tried to create a taxonomy of uberinfluencer types — connectors, mavens and salesmen — in the Tipping Point. The random example of the hush puppies rebirth with random hipsters in New York City cited in the book is closer to the truth in spite of the taxonomy. We have no fricking clue who will start the next contagion.

Consider how Pinterest bubbled with word of mouth until it became a phenomena last winter. Consider how Little Lights Urban Ministries won Give to the Max Day with a Klout score of 10 at the start of the contest. Or how Paddy O’Brien beat out Silicon Valley bloggerati and Ashton Kutcher in a contest for UCSF. On and on. No one predicted these phenomena, these “viral” moments and services. No one influencer triggered their moments online, either.

Yet we keep looking for that Abominable Influencer.