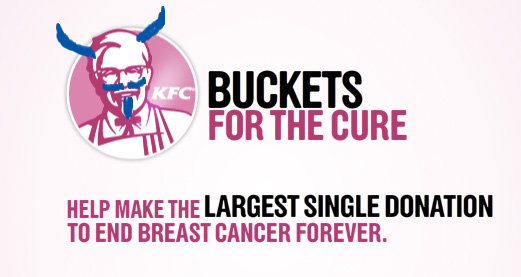 At last week’s Cause Marketing Forum, The Great Breast Cancer Debate panel at the 2012 Cause Marketing Forum featured Margo Lucero of Susan G. Komen for the Cure. Susan G. Komen for the Cure seen a 20% decrease in corporate sponsorships over the past year, but blames the economy rather than the very public fiasco it experienced when it pulled funding from Planned Parenthood.

Lucero’s statement met an audible gasp from the Cause Marketing Forum audience.

In addition to corporate funding cuts, Komen is experiencing additional signs of public dissatisfaction with its actions. This weekend’s Komen for the Cure walk in Washington State saw a 1/3 drop in participants.

But Komen’s Lucero did not address the Planned Parenthood fiasco directly at the Cause Marketing Firm. The panel moderator did not bring the topic up, and the audience was not allowed to ask questions. Instead Lucero offered pithy little nuggets like the tallest blade of grass gets cut first.

Another interesting Komen remark was the statement that all breast cancer foundations are in it together.

This coming from the breast cancer brand that sued its sister organizations over using the color pink, and for using the phrase “For the Cure.” Komen’s legal actions were so egregious that Stephen Colbert, a Komen for the Cure supporter, called them out publicly last year.

From the Planned Parenthood disaster and the legal problems are just two examples. The blatant level of pink washing the brand engages is shocking. Like the Planned Parenthood move, some of these deals seem to contradict its mission, including the controversial Buckets for the Cure partnership with KFC, and deals with gun manufacturer Smith & Wesson.

It’s right to call Komen’s denial arrogant in the face of its many recent controversies.

It’s wrong assume the public won’t remember these public controversies. Brands are leaving Komen because of the dark cloud hanging around its head. It’s obnoxious to offer platitudes and messaging to a room full of cause marketing professionals who know better.

The Komen nonprofit brand — a brand still shared by many corporations — acts like a bully only interested in making money and acting out an agenda that contradicts its mission. Until it fully acknowledges and embraces its mistakes publicly, and then changes its culture, I predict it will continue to lose revenue and corporate sponsors.

What do you think of Komen’s decline?