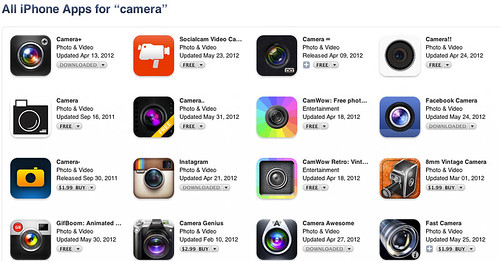 At every corner now, there seems to be a niche mobile competitor.

In essence, Facebook needs to carve itself up into smaller sub social network applications to avoid getting beat by these niche competitors. It wouldn’t surprise me at all to see a Groups application launch next.

We can expect more of these singular apps from Facebook.

Thoughts on the Camera Application

Camera did allow me to do one thing: Delete the main Facebook mobile app from my iPhone, just as I did on my iPad. I used the app primarily to upload photos, and monitor posts. I can use the standard HTML 5 mobile version of Facebook to make sure I’m not getting bludgeoned online, and then comment when I return to a traditional computer.

Unfortunately, like many of Facebook’s traditional web applications, Camera lacks in the functionality that competitive, holistic visual networks Instagram and Pinterest offer. For starters, those networks allow you to do more socially beyond Facebook.

In a few instances, I uploaded the same photo twice in Camera because the application didn’t recognize its own history. It also failed to recognize new photos. And of course, the application name “Camera” is about original as naming a pasta product Mac and Cheese.

As an amateur photographer, let me offer you one tip: Ignore the lack of functionality. Use Camera to load your mobile photos directly to Facebook. Even Facebook owned Instagram lacks the Timeline pop that a directly uploaded photo does. Post independently on each network to maximize visibility.

What do you think of Camera?

Related: Social Photography Thoughts and 4 Tips, The Death of Facebook, Questions About the Visual Media Era