Break Open and Dominate Your Market 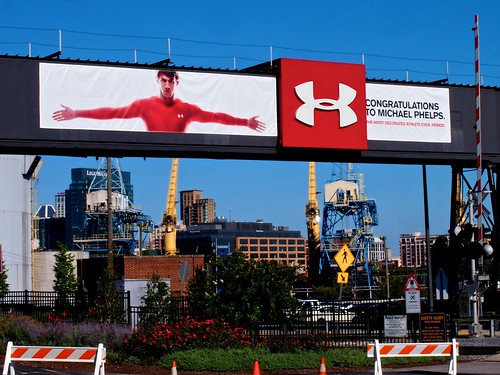 Win one of 10 free autographed copies of Marketing in the Round on Goodreads!

Brands often falter after they achieve success and notoriety.

This represents a classic strategic error. Once a market breaks open, a brand should push through, separate from the pack, and absolutely dominate its marketplace.

That’s what makes for a company that becomes a permanent force in its market.

First place is the envy of all competitors in business.

You have to turn on the afterburners once you start to break open a market.

That means accelerating marketing activities that are creating success, strengthening the product points that are causing customer satisfaction, amplifying successes and customer feedback through new tactics, and spreading the company/brand’s wins as far as possible.

How UnderArmour Broke It Open

One of my favorite case studies in Marketing in the Round (co-authored with Gini Dietrich) is Under Armour. I feel like they did a fantastic job of building an initial groundswell of support, and then absolutely slamming it home with top down approaches in advertising and PR.

The fledgling sportswear start-up was launched in 1996 with just $17,000 in sales, strictly by word of mouth (the groundswell approach). In 1997 that rose to $100,000. Then the company got its first big break. Oakland Raider quarterback Jeff George was photographed for the cover of USA Today in an Under Armour turtleneck. That picture triggered two major sales from Atlantic Coast Conference schools Georgia Tech and North Carolina.

Sales continued increasing as a result of fans and athletes watching the growing Under Armour brand break into the sports ranks. These sporting figures served as influencers, demonstrating the value of the brand.

But nothing drove sales quite like actor Jamie Foxx’s appearance in Any Given Sunday in an Under Armour jockstrap. It fueled enough money for founder Kevin Plank to buy an ad in ESPN Magazine, which triggered $750,000 in sales. Today, Under Armour is a major sporting goods brand with close to $1 billion in sales.

Under Armour broke it wide open, seized a position as a top sporting goods manufacturer, and never looked back.

On a personal level, one of the biggest regrets I have about some of my past endeavors is letting up once I started to experience success. The momentary win creates an intoxicating feeling that causes you to celebrate instead of focusing on finishing the job.

Then you turn around and you see yourself back in the pack, holding the fading memories of success, ruing your loss of temporary luck.

Luck has nothing to do with it.

You have to seize the moment and dominate your market. Otherwise you end up losing in the end.

What do you think about fleeting successes?