Coping with the Klout Reality 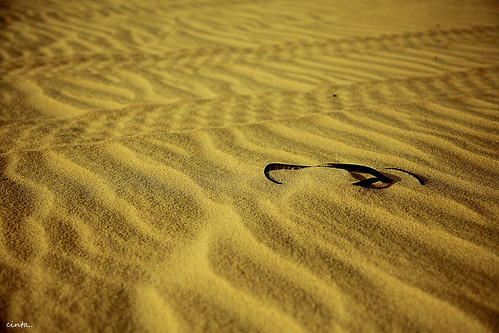 Marketers and individuals will have to deal with social scoring in the form of Klout and its sister technologies.

As time progresses, technologies and alliances evolve. I haven’t written about Klout outside of general discussions on social scoring for a good long while.

There wasn’t much to say. I agreed in principal with many of my colleagues and their continuing coverage about the broken nature of influence metrics.

But I had a second reason: As a professional communicator, it’s become increasingly clear that we won’t escape Klout, Kred and PeerIndex.

The business marketplace cannot help itself. It will chase quick fixes to community building, recruitment and measuring individual online capabilities, making social scoring an obvious play. I have three reasons for coming to this conclusion. 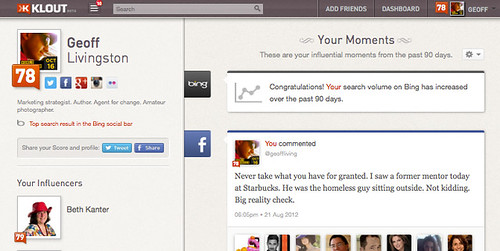 The integration of Bing and Klout cemented my feelings about the inevitable future of social scoring.

It’s not the first major integration of Klout, but search has always been the underpinning of the web, the place people go when they want to find something.

Bing is not Google, but it’s no slouch either. In fact, Bing steadily gains on Google, making it an important play for optimization. Suddenly, one of the best ways to make yourself found on Bing is to have a good Klout score.

The search optimization implications for this change are so far reaching that we cannot begin to understand how it will impact online social behavior. If you thought black hat SEO was bad, imagine hearing your search firm tell you to boost your Klout score.

How soon until Google incorporates Kred, Peer Index or another form of social scoring to compete?

Do they even need to? Consider how Penguin and other Google algorithm changes have made social signals critical to page rank.

2) Klout Works as an Ad Property 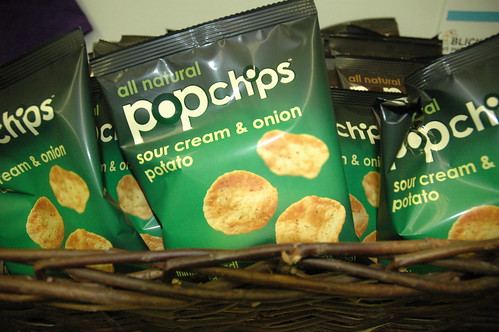 Image by Artexpo: Popchips ran an ad campaign on Klout.

Secondly, I had a client who deployed an ad campaign using Klout Perks recently (I found out after the campaign was in play). The client said the campaign went really well and exceeded expectations, and that they would use it again.

This latter example is the true danger of Klout.

Whether or not it determines real influence, it does attract a fair amount of the social marketplace, people who want to be perceived as influencers. And they use Klout +1, Perks, and other tools.

These very same people can create quite a splash online, albeit if only in the sense that they can create twitter or other update impressions.

Companies will continue to advertise and support Klout because it works as an ad medium. And furthering this trend, with more dollars and perks the so-called influencer has additional incentive to return to Klout (or Kred or Peer Index).

It’s a self fulfilling cycle. 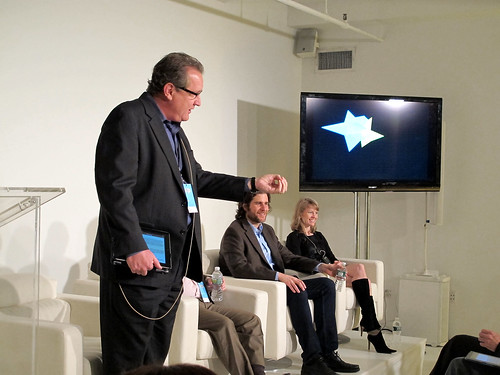 Mark Schaeffer clearly believes in the Klout definition of influence, as depicted in his book, Return on Influence.

I don’t, preferring a school of influence theory called network science. That’s why I won’t publicly recommend Return on Influence, but I refuse to slam it as incorrect or wrong either.

Because the core theories on becoming a Klout influencer in Schaeffer’s book are actually based off of Dr. Robert Cialdini’s research on how individual sales people make themselves more influential and close deals.

Guess what, folks? Cialdini’s work is well-grounded in years of research.

Further, these sales influence theories date back to Dale Carnegie’s How to Win Friends and Influence People and continue today with sales thought leaders like Jeffrey Gitomer.

I’m not saying these techniques are right, wrong, genuine, manipulative, etc. I will say my sales training was a Dale Carnegie course, that I was my class’s sales talk champion beating out big guns from Fortune 500 companies, and I have closed my fair share of deals since then. So I’ll vouch for these theories.

If someone wants to manufacture attention to garner the perception of influence online, Schaeffer’s blueprint — grounded in Cialdini’s research — will likely work. And many people have bought this book, and are following its recommendations.

The cat’s out of the box. Welcome to the world of attention-driven “influencers.”

It’s important to talk about social scoring and its weaknesses on blogs and online conversations.

To me, I see these types of media as somewhat to very harmful because they value someone’s worth. The ethical considerations of assigning a number to someone’s social worth are significant. Additional problems stem from conditioning people to become influencers.

Accepting that Klout and other social scoring tools are here to stay, we have to find ways to cope with this unfortunate reality. Specifically, where do we draw the line?

We now have people who can’t qualify for a job because their Klout score is too low. What’s next, renting in certain neighborhoods? The ability to reproduce based on Klout score? Or worse?

Small wrongs have the potential to become big ones very quickly.

Do you think social scoring is a fad or a permanent part of our online culture?