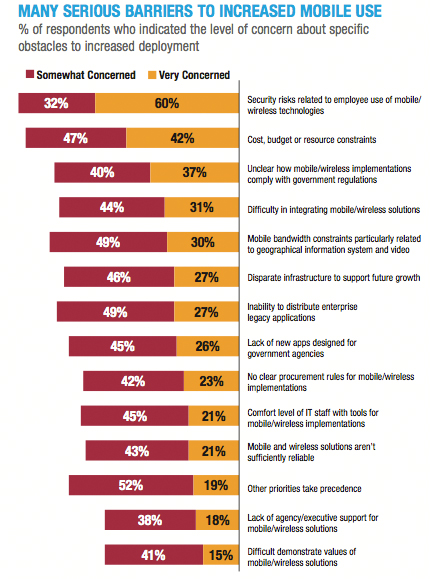 Imagine someone working in a government security clearance environment (defense, international affairs, homeland security, etc.). They need to balance their workplace restrictions and national security with their desire to chat with friends online.

And it’s not just the government, but also the many contractors serving it throughout the country who have to adhere to the same restrictions.

As the above chart shows 93% of surveyed government officers are concerned about security risks. The fear is real as evidenced by the many Wikileaks scandals experienced by the Obama Administration’s various agencies. 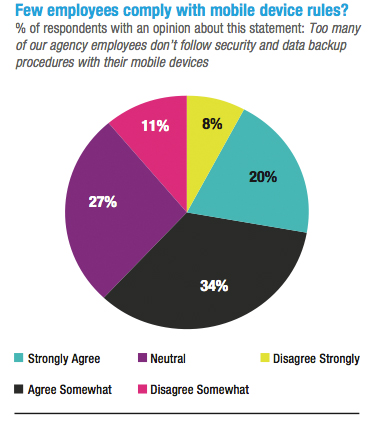 Worse yet, most agency officials don’t think their employees are complying with guidelines, in spite of policies, forbidden apps, training, etc.

The Office of Management and Budget released its digital strategy for mobile devices (phones and tablets, hooray!) earlier this year. It has three core objectives:

These initiatives are Supposed to be enacted by mid-year 2013. But consider the eGov Act of 10 years ago still hasn’t been fully enacted, so there’s little hope for this newest set of requirements.

The latter bullet point makes the first two objectives very difficult, simply because people are people and they use their phones against federal policies with social media.

Security centric federal agencies like the National Security Agency (NSA) are considering provisioning employees with super encrypted smartphones as a possible solution. In reality, the costly nature of networks, tablets and phones makes bring your own device (BYOD) the most likely scenario outside of hyper-secure situations like intelligence and military operations.

That creates information assurance issues, which the government acknowledges, but cannot seem to address.

In my opinion, the government faces the ultimate Pandora’s Box with social media on mobile and portable devices. The Box was open in the workforce’s personal lives well before the government realized it.

It’s too late, security risks and triaging leaks will become a regular part of government communications. The best agencies can do is train, clearly state policies, monitor and listen online, and then act when infractions occur.

There’s another aspect to this. The need to make government more transparent, the great promise of the 2008 Obama campaign. Oh well.

What do you think about the government’s mobile nightmare?