LinkedIn Endorsements: Does It Get Any Cheaper? 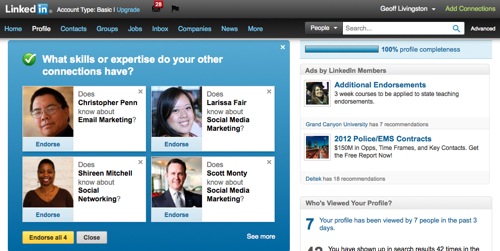 But as you dive deeper into LinkedIn Endorsements you see how easily they can be given without thought or consideration.

An algorithm sources key words for someone in your network and asks you to endorse them for that topic area. With a click you suddenly endorse them on a topic.

When I first heard about Endorsements I thought it would be similar to Recommendations, maybe Recommendations Light. But instead it’s as cheap as a Like, a click and even the dreaded K+.

What’s scary about Endorsements is the perception of topical influence and relevancy that it gives to unknowing employers, customers and business partners. Suddenly you are willing to trust someone based on opinion, and one that is elicited by an algorithm.

LinkedIn has received numerous complaints that the endorsements have degraded the network.

That means a cheapened watered down referral system where he/she who inmost popular will garner the perception of savviness. Buyer beware.

What do you think of LinkedIn Endorsements?