Any of Us Can Fall 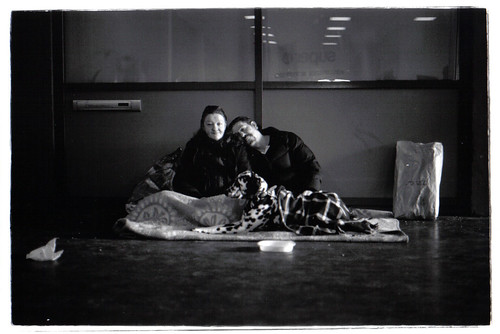 Last summer I shared on Facebook that I had seen a former mentor outside of Starbucks in what appeared to be a state of homelessness.

Susan Kuhn asked me to blog about it. I waited to publish the spot until I felt comfortable enough to discuss some matters, and so here we are.

It’s not just mental disease or “poorness” that causes homelessness. Far from it.

Any of us can fall.

See this guy was really brilliant, one of the smartest men I had ever met, and I wanted to learn from him. He was a big time earner, and a successful person, in my opinion.

And here he was sitting outside of Starbucks looking lost. He saw me, and clearly did not want to talk to me. Otherwise, I would have approached him.

There’s so much shame in today’s world.

I did not want to rob this man of the dignity he has left by forcing a conversation and insisting on helping me.

When it comes to homelessness, we like to ignore it writing it off to drug addiction. That’s why I argued the BBH “Homeless as Wifi Hotspots” controversy at SxSW was actually good. It exposed so much ignorance about the issue:

These types of statistics stun, shock, and defy conventional public opinions on homelessness.

But it’s different when you know someone who is homeless. The issue moves from an intellectual acknowledgement to a very real story that strikes fear into your heart.

We all struggle, we all have our crosses to bear.

None of us are as perfect as we seem online or in our business meetings or at social affairs.

Hardships vary greatly. Any of us can lose that job and/or find ourselves in a pinch. Sanity is not a guarantee, either. Home life can be difficult.

I won’t lie, I know the picture looks real good for me online.

Here’s the truth: My wife lost her job last summer. Like at least 10% of American families in recent years, I can tell you it was a real challenge, adding extra strain to a tough year following the flood that hit my home in September, 2011.

During the initial months of adjustment, we had some scary scenarios. The change caused me to depart full-time nonprofit sector work I had chosen to pursue for the prior three years.

You soldier on with faith that it will work out, but knowing that you, too, could fall. Sometimes it’s out of your control.

In our case it did work out, and for that I am very grateful.

We have a beautiful daughter who loves us, a roof over our head, a stocked fridge, gifts under the Christmas tree (Caitlin is of Christian descent), money in the bank for the immediate future, clients, and prospects. Business looks good.

I don’t take these things for granted, either.

Especially after seeing my old once powerful friend in such a state. Things change quickly.

That’s it. It’s your turn. Are you grateful for what you have this Christmas?

If you’d like to fight homelessness with social media, please consider a donation to my friend Mark Horvath’s charity Invisible People.