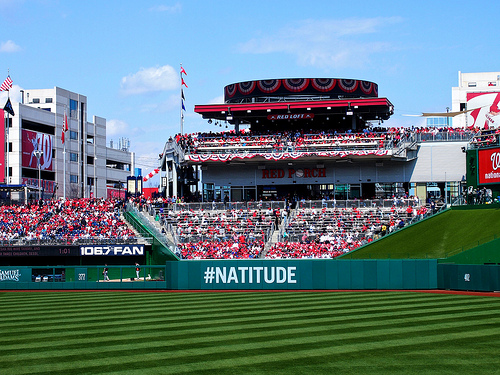 Opening Day last week was my Dad’s first day of retirement, so we went to the park with a couple of friends to celebrate. It was one of the best days of my life, a day I’ll cherish and take with me to the grave. But it was also enjoyable because the Nationals’ in-stadium experience significantly improved over the winter.

When you walk into the stadium and look out onto the field, the first thing you see in the outfield is the hashtag slogan, “#Natitude.” That’s how my 2013 season began with the Nationals on opening day, a brilliant integrated in-park/online/broadcast experience.

Encouraging fans to use the # slogan is brilliant, spanning Twitter, Google+ and Instagram, and perhaps soon Facebook. Now fans can find Nationals conversations on their preferred social media channel by simply searching for #Natitude.

The full integration of the Nationals experience into the physical goes further. Consider the following:

The Nationals use of electronic media supersedes promotion and marketing. Last week it was announced the team was moving its player analysis system — a hybrid form of big data mining matched with traditional scouting — to a mobile friendly format. The system will allow staff to access analysis and reports anytime, anywhere from a tablet or mobile phone.

The experience suffers in one area. In-stadium wireless access needs significant improvement. Verizon and AT&T’s 4G networks suffer from the load impact of a full stadium, as does the in-stadium wifi network.

As cool as all of the hashtagged updates are, getting photos like this uploaded live from the stadium are a bear. And while ordering food wirelessly seems like a great idea, you have to wonder if the order will go through. I can’t imagine trying to upload a short Vine video. Simply impossible.

But that’s the one major sore spot. So, yeah, the Nationals 2013 experience is pretty awesome.

I’m sure lessons learned are being shared with MLB, and the other 29 teams. As a whole, MLB Interactive has been leading major U.S. sports into the online era with its notable At Bat application for viewing games and reading news, as well as its significant social media efforts.

Have you been to a baseball game yet this season? What do you think of the integration of media into the live game experience?