Antisemitism in the United States

Last week I received two off-color remarks about Jews. It didn’t surprise me, I’ve experienced periodic antisemitism throughout my life in the United States.

Perhaps last week’s remarks were spawned by my beard, a salty rabbinical looking thing that I usually shave. Maybe they had nothing to do with me at all. It really doesn’t matter what spawned them, they revealed an ignorance that’s existed through millenia.

I grew up in a suburb of Philadelphia called Glenside between the ages of 2-8. We were the only Jewish family in an Irish Catholic neighborhood.

Things did not fair well for us. Our cars were vandalized, a swastika was painted on our door, our house egged periodically, and yes, my sister and I were bullied ceaselessly by neighborhood children, our supposed friends, who teased and beat us regularly, turning trips to the playground into an anxiety ridden game of Russian Roulette.

It was a brutal experience, one that I rarely discuss in great detail. I never fully recovered from Glenside.

For more than a decade afterwards, whenever I walked anywhere I watched my shadow, fearful of getting jumped. Today, I can still sense when someone is approaching me from my backside. And yeah, I question intent in relationships… My first instinct is that people are messing with me.

For years, I denied my heritage and avoided all faith. My young mind reasoned that Christianity beat me, and Judiasm was the reason. To this date, I cannot accept a western concept of God.

I incorporated some pretty vicious defense mechanisms into my adolescent psyche that I’ve spent my life trying to let go and evolve. As I’ve grown older I’ve seen how responding with forceful argument to perceived wrongs (fight bullying with bullying) is an errant protection mechanism. Now I try to practice silence and restraint unless a response is warranted. I use distance to protect me from those that hurt me, and to protect them from the deep anger they unknowingly tap.

Consequentially, I think I’ll always be a bit of a loner. I don’t trust friends to do the right thing consistently. Loved ones and friends deliver great pain in this world.

Maybe there’s still hope, I don’t know. My inner circle has been there for years, decades now. They accept me for who I am.

So you see, this childhood experience left me with some jagged edges that are getting smoothed over ever so slowly by the stream of life. I realize that the acts I take today because of those experiences are my responsibility, and not something that can be blamed on my young tormentors; that those children in the 1970s were kids, acting in an ignorance handed down through the eons generation by generation.

Yet, those scars also serve me well. They motivate me to succeed, to not let bullies win in stamping down others. Additionally, I am rarely surprised when I hear off color comments about Jews. I’ve seen enough in this world to know that the holocaust can happen again, here or elsewhere.

For all of its beauty and grace, the human species delivers great violence and terror, too. 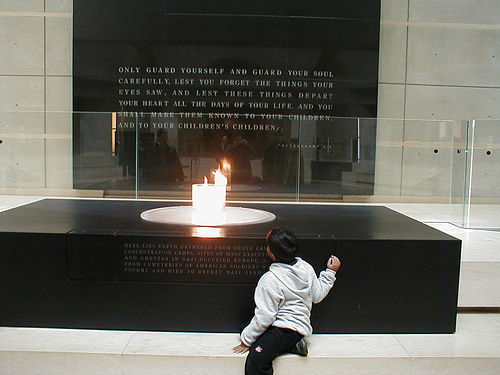 My daughter Soleil is a beautiful girl with fair skin, a button nose, blue eyes, and dirty blonde hair. But because she’s a half Jew, the Nazis would have sent her to the concentration camps to live and then die.

When she’s at an appropriate age, we will go to the Holocaust Museum and she will probably watch me weep (it’s recommended no one younger than 11 visit the permanent exhibit). I will weep for my past, for my grandfather and his family who lost everything and barely escaped Nazi Europe, for those who suffered in the worst way possible and fell to the great Nazi brutality, and for my 19th century American ancestors who changed their name in suburban Chicago from Lowenstein to Livingston to avoid persecution. I cannot help but weep for the terrible brutality waged upon Jews now and historically throughout the eons.

I have never visited the museum, knowing it would cause me to cry uncontrollably. Soleil will go to the Holocaust Museum with her Dad, and see me break. We cannot forget what happened.

It will be the time when will she learn of her blood, her father’s past, and her ancestors. I can only shelter her for so long, she must know, because no matter what, she is a Jew, in part. Her children will be 1/4 Jewish.

I have Jewish friends who are shocked when they hear my story. They’ve never known hateful bigotry in their lifetimes. I hope Soleil experiences their version of the United States, that her future day trip to the Holocaust Museum becomes a dormant packet of information that she never has to draw upon.

Yet, this tale is not their lucky life, rather my damaged existence.

We live in a country full of ignorance with a deteriorating education structure that breeds increasing Christian fundamentalism and conservative dogmatism. I fear the day a Tea Party member becomes President of the United States, a reality that’s definitely possible, for it could easily be the harbinger of anti-semitism not seen in this country since the early 20th century.

Consider Sarah Palin’s blood libel episode. And when Bush II became president and 9-11 happened, I experienced anti-semitism in Washington, DC for the first time in my life. Some people quietly blamed the Jews for 9-11, and in one case I saw graffiti on a car blaming Jews for Middle East strife. It was shocking to see this attitude portrayed in this international city..

If anti-semitism rears its ugly head in the United States en masse, I might move my family out of the country. I’m not kidding, not just for political reasons, but to protect us from what could happen.

To this day I am skeptical of just about any pitch I receive on Christianity, and unbelieving of western religion in general. I listen, I hear the spiritual value, but I’ve seen too much, too many evils coming from the hands of the righteous fundamentalism spawned by religion and moral superiority in this world. There’s so much to say about this tangent, this post could go on forever, which would not be fair to you, my fair blog reader. 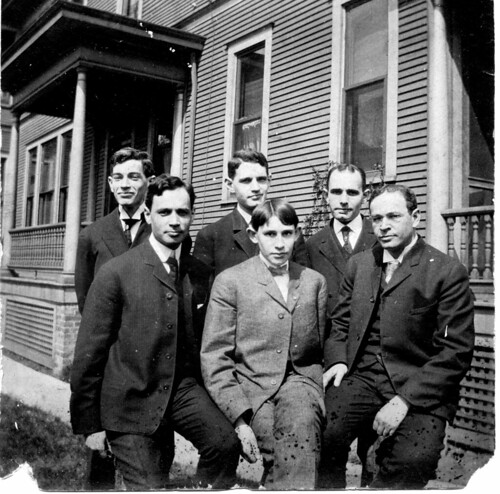 Why put the past after the future? Fear of the future is grounded in the past, and my hope is also grounded in an ancestral past.

It’s been a while since I talked about my great grand Uncle Sigmund Livingston, but his actions in the face of anti-semitism in the early 20th century produced today’s Anti-Defamation League in 1913.

The Anti-Defamation League has had its issues, but the fight against oppression it wages, and the good that it has brought far outweighs these blips.

This channeling of a fight against wrongs offers a great lesson. Opting for silence against oppressors rather than fighting, and forgiving my childhood bullies may seem like yielding. Instead, I counter that argument. The fight was misplaced, for it’s not the individual who delivers anti-semitism and bigotry, rather a general societal ignorance throughout the world, wherever someone is treated poorly, beaten, or in the worst cases killed because of their race, religion, tribe or gender.

Ignorance is the enemy.

Fighting ignorance with light and education is the only course of action that benefits both those attacked, and the oppressors. We can forgive each other when we come to know that we’re not so different afterall. An oprressor can see their wrongs, and share their experience with others, and most importantly break the chains of bigotry in the immediate future with their children.

We left Glenside in the summer of 1980. It took me 33 years to summon enough courage to share my story publicly.

I did not speak to ask for sympathy or to explain my wrongs or complain. You may comment with compassion or with anger, for this post offers much to like and dislike at the same time. It won’t matter. I’ll walk forward with my chin up, ready to grow and succeed in spite of the past. It’s all I know, and the only course to feeling better, terrible in motivation, yet defiant and grateful in success.

No, I published this post because those comments were finally enough to break the camel’s back. I won’t yield to the anti-semite anymore. I’m not ashamed of myself or my blood. Instead, I choose to force that negativity into light (and I donated to the ADL, too).

Comment if you must, but if this post really touched you, then share it with friends and family, talk to them about prejudice and bigotry. Talk about how every single one of us holds great potential for light and darkness within us, that we can make the world better if we choose to see our commonality, and everyone’s uniqueness, too. By celebrating our differences, we can create a place that’s safe enough for everyone to be comfortable.

Potential unravels when we hold people to the torch, when we make them suffer for not being the same, or having a differing point of view, or more commonly, for differences of gender, sexual preference, beliefs and descent. The world becomes colder, fraught with danger.

The floor is yours. Forgive me if I don’t respond.