Behind Time and Again 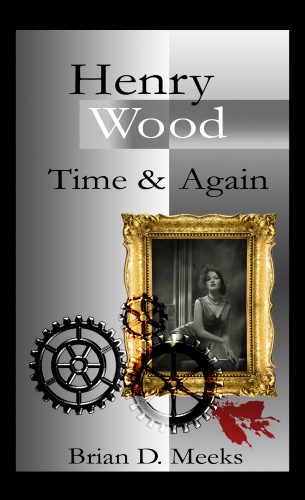 My friend Brian Meeks released his newest novel Time and Again yesterday, a self published mystery. It’s been pretty cool reading Brian’s blog, wathcing his drafting process, and chatting about publishing books. So I thought I’d take a break from the usual blah-blah, and ask Brian some questions about how he self-publishes…

BM: It is a throwback to the days before CSI, when the Humphrey Bogarts (Sam Spades) of the world did the right thing no matter how hot the dame. Time and Again is the second book in the series and we continue to learn about the characters.

I’m a firm believer in gradations of good and evil. In fact, the guy who I was sure would be the main villain in the end, turned out to be much different than I had expected.

One of my reviews of the first book, Henry Wood Detective Agency, by a woman named Marianne Worley, wrote, “In his debut novel, Brian Meeks has hearkened back to the classic film noir detective mystery. Henry Wood is such an engaging and likeable character–with a sharp mind and sharp wit. The story is full of fun twists and turns, and left me desperate to read the next book in the series. Bravo!”

After 24 reviews the first book has an average of 4.7 stars.

GL: What’s it like to independently publish your books?

BM: The first Henry Wood was published by a small publisher who mostly did woodworking books. He was a reader of my blog, Extremely Average, which began as a look into the foibles of me teaching myself woodworking. I did handle the Kindle publishing, though.

My second book, a non-fiction piece that looked at the 30-5 Iowa Hawkeyes Men’s basketball team, was the first one that I self-published.

It was out of necessity. I had been working on it for eight or nine months with only 7,000 words that I found readable. Jan 1, 2012 rolled around and I told Roy Marble, the main subject of the book, that I would try to write 3,000 words and if it sucked, we were pulling the plug. We had a launch date of Feb 4, at the Iowa vs. Penn State game, in Iowa City.

That meant I needed to bang out 45,000 words, get it edited, cover designed, and published in five weeks. Over the next 21 days I got it written, though I was sick for three of them. Every 10,000 words I’d send it to my editor Meghan Ward. She would work on it while I wrote the next bit.

I had to have the book done and ready by the 28th to be able to order the print copies for the launch. I didn’t know how to buy an ISBN, format, or do anything relating to publishing, but you know what? The Internet does.

I figured it all out. The launch was great and we’ve sold around 1,300 copies (print and eBook). Once I learned how easy it was, I realized that earning 70% vs 7.5% that an author might get from a publisher, was a better deal.

One still needs to market, regardless of the route (traditional or self-publish). It will be hard work no matter what, and the success will come from the writer’s effort and not the publishing logo on the spine.

GL: Do you ever want to get published by the big six publishing companies?

BM: A good question. Well, the Big Six has shrunk in the last couple of weeks when Random House and Penguin merged. They missed a great opportunity to name the new company Random Penguin, but I digress.

There isn’t any circumstance where I would consider giving up the publishing of the eBook version. Hugh Howey signed a print only deal with Simon and Schuster for his NY Times best seller, Wool. He kept the eBook rights, his agent has inked 28 foreign rights deals, and Simon and Schuster used their skills in getting print into the hands of brick and mortar stores to maximize that sales channel. That would be the only sort of deal I would consider.

GL: What measures do you take to ensure quality?

BM: I have worked with three editors, Meghan Ward, Veronika Walker for Time and Again, and Erin Feldman who is currently working on the third book in the series, Perception. I’ve also hired Erin to re-edit Henry Wood Detective Agency because I had concerns about the quality.

My biggest weakness is the comma. I put up a fair amount of resistance to changes in how I used commas in the first book, to the detriment of the final product. The hope is that I’ll get book one in the hands of several thousand new readers with the Free Day promotion (Apr. 23 – 25). I felt it was important to polish things up a bit.

Editing is hard. I’ve been fortunate to work with three spectacular editors and when the day comes that I can afford it, I’d probably have two of them review each book.

In the world of Indie Publishing, quality is the first thing that sayers of “Nay” (mostly horses) will grab on to when they try to tear you down.

GL: How do you intend to market Time and Again?

BM: Time and Again is part of a six month plan. At present, my intention is to launch one title per month starting on April 23rd. Time and Again, will be followed by Perception on May 21st. From there, I will release one of the two stand alone novels I’ve written, Touched (A thriller) or Underwood Scotch and Wry (Satire). The fourth book in the Henry Wood series would follow in June and then the other stand alone. After that, I’ve got the first book in a YA/Children’s book series, Secret Doors: The Challenge, that is aimed at readers who enjoyed Harry Potter.

The idea is to build fan base and then offer them more to read. I’ve read that an author who can find 1,000 loyal readers, people who enjoy his or her style enough to read everything they write, will make a nice living.

The hardest part in finding a readership is getting people to give a new writer a chance. That is why Henry Wood Detective Agency will be free on Kindle from the April 23rd – 25th.

These free days allow a book to climb the charts (assuming lots and lots of people click “buy for $0.00”). The hope then is that after the promotion ends, the rankings will be high enough that there will be some sales. Free is nice, but it doesn’t really help me pay the bills.

My goal is this, if 10,000 people will download the free version of book one, I’d expect 10% might read it. There are lots of hoarders out there who just download but never read.

Of the 10% who read it, hopefully some will be inclined to buy book two. Also, there may be some who are willing to leave reviews. Reviews are huge in the book business. (Not so subtle hint)

The main thrust of my marketing is actually focused on the first book’s free days. I’ve submitted it to 17 sites who advertise Kindle Free days. I’ve built the blog tour, which you’ve so nicely agreed to be part of, and during that time, I’ll be tweeting and shouting to the world, “Hey, check out my books.”

The bottom line is that I need YOU (not Geoff, but the readers of this post) to give the free book a try. If you’d like to tell a friend on Twitter or FB, awesome, but the first step has to be click “buy” on Amazon.

If you do that, even if you don’t give it a read, you’ve helped.

GL: What’s the value of writing a series versus stand alone books?

BM: In almost every instance of Indie success, they’ve gotten there through series. If a reader discovers an author they like, they will often buy the next book. If it happens to already have characters they’ve grown fond of, the chances improve that they’ll continue reading.

That’s why I’m launching the next two Henry Woods, before delving into the stand alone titles. I hope to get the readers hooked.

GL: What tips do you have for aspiring writers?

BM: These tips are pretty common on blog posts, so I’ll just list a few, and then add one of my own.

1) Write every day.
2) Pay for professional editing and cover design. Admittedly, I design my own covers, but it’s because the covers I’ve paid for have been worse than what I can do. I still try to pay for cover art with each title.
3) Hook the reader early. With the masses of eBooks and all the free ones available, most people will read the first page or two before giving up.

Now, my own thoughts:

When starting to write, it’s natural to want the reader to see what you imagine. Every detail is so rich in your mind that it must be important. The color of the dress, the shape of the clouds, the emotions of the protagonist, you want it all to be as vivid as it is in your mind.

Katarina strode into the library with all its Victorian finery and sat down at the desk.

I didn’t say “Strode confidently”, because nobody can imagine a person striding timidly. The adverb wouldn’t have helped and it would have pissed off people who hate adverbs (Stephen King).

I can see the entire room, what’s on the desk, the types of books, the two levels of shelves and the spiral staircase in the corner that leads to the second floor. There is a desk lamp with a green shade and a Tiffany lamp next to the leather chair by the coffee table. Is that what you saw?

Nope, probably not. But I bet you saw books. The desk was probably wood as were the book shelves. There was likely leather on the chairs. Victorian finery does plenty of work in painting the scene. I didn’t need to do it.

Let the reader create their own world. The best part is… they’ll give you the credit.

Thanks for letting me ramble on, Geoff, I’ve really enjoyed myself.