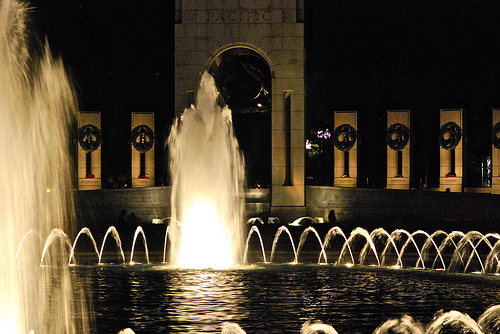 Science shows us the white light experience and other near death moments produce a strain on our minds, in turn creating a chemical reaction which in creates heaven’s limelight.

We are just fascinated with death, so maybe we can explain the biology of it, but there has to be more. What about impact on the human soul?

When You Almost Die 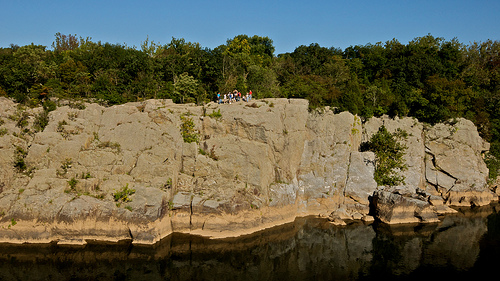 Being an idiot, I’ve arrived at death’s door a few times.

The first time I was in my freshman year of college I passed out drunk and stoned in a snow bank in Syracuse, NY. When I came to, I was groggy and moved on to my dorm, but God damn was I stupid. No hallucinations to report other than bizarere drunken fantasies of an 18 year old boy.

The next time, I was older, 27 to be exact. I was hiking off trail at Great Falls on the Maryland side (pictured above). For those of you who know the Billy Goat Trail, this was the spot, and I was on top of a small cliff. I lost my footing on the trail, slipped and fell off, perhaps a drop of about 30 feet.

Now, this, this I remember like it was yesterday. It happened fast, and I almost wet my shorts, except I didn’t have the time. I grasped at anything I could and managed to get a bit of a finger hold, not enough to catch myself, but enough to cause me to bounce along the wall a couple of time, and rip off my fingertip pads in the process.

When I hit the floor, I had clearly broken my arm and had one thought only, “Thank you, God, for not making it my head.” I was grateful to be alive.

My friend Eddie basically carried me out of the woods and saved me, a fact he always reminds me of every time I see him. When we got to the hospital, the x-ray revealed I had broken the ball of my elbow clean through. Fourteen years later, I still don’t have full rotation on my right arm, and it hurts every damn day.

The third time I almost died was on a motorcycle. I was riding by the National Cathedral in Washington, D.C. going about 30-35 miles per hour. Oncoming traffic approached me from my left, and a stopped bus was on my right. That’s when a gentlemen pulled out across my lane about 10 yards ahead of the bus to make an illegal left turn with his minivan.

I had nowhere to go, and not enough space to brake so I tried to pull ahead of the bus, and cut the corner.

Bus passed, corner I could not. I clipped the minivan’s left rear quarter, and slammed by my entire left side into the vehicle before getting thrown off the bike onto the pavement. My last thought as I drove toward the minivan, “Fuck it, I’m getting a Harley.”

Perhaps I sensed I would live. Thanks to the full face helmet and the body armor I was wearing, I did. The bike got totaled. I suffered a grade 2 concussion, and couldn’t work a full day for two weeks… I also bruised my left thigh through and through, and suffered road rash on my chest in spite of wearing a leather jacket. The minivan driver got a ticket, and that was it.

Three near deaths, and no fade to white, just a lights out, or a graying (more of a fade to black).

Oh, I did buy a crimson Harley Davidson Road King a month later for my 30th birthday. I hated it. It drove like a bus.

Flirtations and Avoidance of Death 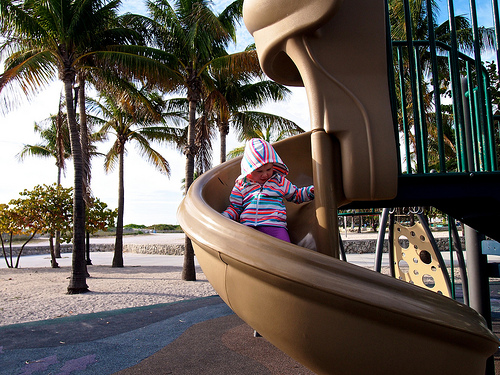 Two weekends ago a young lady died at a Tough Mudder in the DC area. It was terrible story to read, a reminder of how dangerous that race actually is.

Every day I wake up and my entire right side hurts from the elbow injury and my right knee that I blew out running a Tough Mudder last fall.

You have to sign a death liability waiver to run a Tough Mudder, and I’ve been thinking about that all week. I may not run again, contrary to macho claims of recovery. Motivating the reversal is the consistant pain, and of course, what I have to live for, which is quite a lot.

In all three near-death instances, I did not have any inclination that I might die that day. This drives home how fleeting life is. Every moment matters. Nearly dying leaves you with a real sense of questioning value for impact.

You really have to wonder what the overall contribution means, and stay laser focused on outcomes.

Yes, I question the value of existence, or at least this one, a place where people get miffy and/or celebratory over inclusion in “influencer” lists. It doesn’t mean much to me to ranked 74th on Mad Magazine’s 100 influencers list, comprised of people who talk A LOT on social media about social media. No, I won’t leave the Internet because I don’t like the influencer game.

I want to contribute and help someone’s career, or to help a company/nonprofit or even a sector grow. It does mean something to lead with actions so my daughter understands that real impact comes from achieving things. That’s opposed to seeking the attention gravy that’s really just an outcome of right actions.

There are clear reasons to be present and give.

I may not run the Tough Mudder again for the same reason I sold my Ducati two years ago. Soleil means the world to me. I would die for her, but not for a silly adrenaline rush or to prove I can come back from a bad injury.

Would I die running a Tough Mudder? Extremely unlikely, but my orthopedic surgeon told me I faced an exponential chance of seriously injuring myself again. And god damn, even though I have full use of knee again, it aches. All the time. I want to keep at least the left side of body feeling good.

When I was a 15 year old boy, my high school football coach recruited me to play line for the team. My father prevented me, suggesting I would get terribly injured. I’ve had many friends who suffered bad injuries playing football, and in the wake of my own breaks and surgery, I finally realize that my Dad probably did me a favor. Afterall, I broke bones four different times playing basketball. What would an amateur football career have done to my body?

Am I going to run away from every possible flirtation with death and injury? No, I still bicycle on the street, I love climbing mountains and going on hikes (though I stay on trail now), I would run a marathon, and so on, and so forth. But it’s managed risk.

When it’s our time, we can’t run away, but I certainly want to avoid death due to testosterone-based foolishness. Ah, the wisdom of middle age.

Deliver to the End

They say the world may end in a big rip, a result of the universe expanding too far. Then we all die, and our little conquests for meaning won’t add up to anything.

Yet, some simply walk about mindlessly just trying to feel good, others find contentment in momentary presence, and a few insist on packing everything they can in life.

Roger Ebert recently passed away, and he worked to the very end. He’s not the only one, many people work to the end, doing what they love, what matters to them and the people they have come to now.

I get that desire. Make every day matter, try and deliver to the world something useful, interesting, entertaining, or at least something to smile about. Somehow, I think presence is a part of that and walking your truth. Know who you are and do what you love.

Then I see others, the elderly in particular, folks that I’ve had to care for or have seen pass. Some enjoy their remaining time with their families, others are left alone to die, wasting away the years before TV sets and books, talking to fewer and fewer daily as their friends die off.

Sometimes I think there’s a real injustice done to our elderly by crating them off and leaving them in retirement homes. But some of those same elders continue putting themselves into the stream of life, while others give in to a slow surrender of loneliness.

I hope I never get to that point, frankly. I hope I go the way of Roger Ebert, doing what I love to the very end. Better to burn out than fade away, right?

You don’t know when it will end. You just know that it will.

What do you think about death?