4) The Half Made World by Felix Gilman: Perhaps the best steam punk book I’ve read, Gilman offers a post modern approach to the genre and adds historical, fantasy, and western elements into a powerful commentary on American society. A captivating read, and one that forces you to consider the archetypes we hold so valuable in the United States.

5) The Handmaid’s Tale by Margaret Atwood. In a world of extremism, what would happen if one side won the battle of public opinion? Margaret Atwood’s dark view of a religious state in the former United States has women enslaved, serving society. Something to consider as political PR becomes increasingly charged with religion and extreme points of view.

6) Neuromancer by William Gibson. An inescapable science fiction masterpiece, anyone who reads this blog can imagine Gibson’s Neuromancer. Plot twists include dark forces acting behind the scenes in a cyberworld, artificial intelligence come alive, and hackers fighting wars between governments and corporations alike. This book accomplished a rare feat by winning three major genre awards, Hugo, Nebula, and Philip K. Dick, and is quintessential science fiction.

7) Leviathan Wakes by James S. A. Corey. Leviathan Wakes forces us to consider genetic engineering as a weapon within our solar system, and also bridges the concept of a distant long-departed alien super intelligence. It’s a relatively new space opera with a post-post modern detective plot. I loved it, and thought the tension of the protagonists’ struggles was well done.

8) Dragonlance Chronicles Trilogy by Margaret Weis and Tracy Hickman. They say every fantasy book after Tolkein is just a reinvention of Middle Earth. Well, this trilogy was the book series that best mirrored the Dungeons and Dragons craze. In fact, it was part of it. Dragonlance spawned more than two dozen sequels, and of course, several games. Tense and compelling, this is pulp science fiction at its best. Enjoy!

9) Dune by Frank Herbert. The word “epic” doesn’t offer Dune justice. While Herbert and son wrote a series, it’s hard to compare to the original. Space opera, religious impact, prodigal son, feudal society, aboriginal roots, and on and on. One of the rare page turners that captivated me enough to forgo sleep. It’s easy to see why Sting tried acting in the failed movie rendition (see above video clip). Thank God the TV series better served the original novel.

10) Foundation by Isaac Asimov. There are several Asimov books that could have made this list, but the original Foundation trilogy is the series of books that I love most. Asimov is an original hard science fiction master, and fathered the concept of a galaxy populated by man as the only sentient being. It’s an incredible look at math, technology and how we continue to war no matter how advanced we become. Like Tolkein, you cannot consider yourself a science fiction aficionado unless Asimov is in your mind. 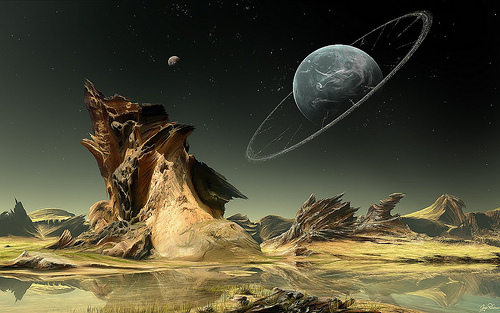 11) Pattern Recognition by William Gibson. This is the first book in a loosely knit trilogy about the Blue Ant agency from the father of cyberpunk. Lost in a post 9/11 world searching for agency head “Big End’s” crazy request for information about a video, our heroine Cayce Pollard takes us through a bizarre and poignant commentary of today’s Internet culture.

12) Stranger in a Strange Land by Robert A Heinlein. This 1962 Hugo Award Winner pushed the genre into a new direction, and examined themes such as religion, sex and love. A few years ahead of its time, Heinlein also examines what its like to grow up in isolation and then be admitted into society as an adult, in this case, a by product of early colonization on Mars.

13) Sundiver (Book 1 of the Uplift Saga) by David Brin . How does a species rise to prominence? The Uplift Saga looks directly at what causes dolphins and apes, and yes, even human beings, to rise and become sentient beings. They need Progenitors to help them get there. Great compelling science fiction looking at genetics and space travel. This first book opens the saga, and books two and three Startide Rising and Uplift War both won the Hugo and Locus Awards, and with Rising also taking the Nebula Award.

14) The Sword of Shannara by Terry Brooks. I almost didn’t include this book because each new addition to the Shannara lexicon seems to water down the value of the story and plot line, turning it into a cheap ploy to sell books. Yet, I have read Sword of Shannara several times, and it is probably the best piece of elf world Tolkein-esque fantasy outside of Lord of the Rings. Read the first book and skip the rest.

15) Black Sun Rising by C.S. Friedman. This may be the least well known book of my favorites, but I really liked it because it deals with fear as a supernatural force. In conquering fear, we survive and prosper, but by feeding it we create darkness. A fantastic fantasy-based metaphor for our very real-world problems.

16) Ender’s Game by Orson Scott Card. Another page ripper, this one deals with some interesting ethics, in particular child soldiers. There are similarities to Handmaid’s Tale in the future vision of society and how people are scripted into roles. Like other books mentioned in this list, the original is phenomenal but I could not get into the larger series. The movie adaptation comes out later this year.

17) Night Watch by Sergei Lukyanenko. One for the vampire/werewolf crew. I’m not much for this sub genre, but this particular serious is phenomenal and transcends into a bit of magic and fantasy. Sergei’s work is set in present day Moscow, and like other Russian authors of yesteryear offers a gritty view of everyday urban society. I loved every single book in this series.

Some greats like Arthur C. Clarke, Philip Dick and Ray Bradbury are not on the list, but I really wanted to offer books that I Loved with a capital L.

These are Amazon links, but I am not an affiliate and will not profit through any purchases you make. Some of these reviews were featured last year on Spin Sucks.