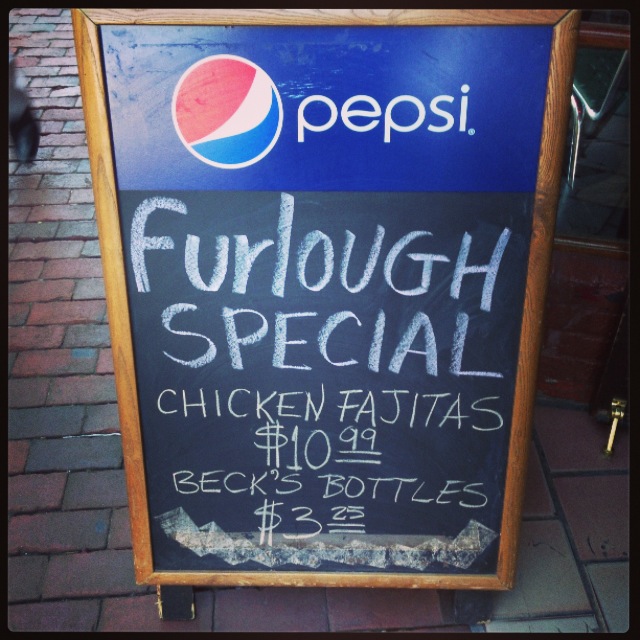 A DC-area Starbucks is overloaded with furloughed feds talking smack about the shutdown.

The entrances to the Mount Vernon Bike Trail near your house — maintained as part of the George Washington Parkway by the National Park Service — is barricaded.

You can’t visit any national monuments on the mall.

Rush hour is slackened to a reasonable slog, but unusually random traffic jams fill the day.

Some of your friends and colleagues suddenly call you back, ready to talk now that they aren’t getting shipped out somewhere in the United States or beyond on this week’s government business.

A friend who is a subcontractor on a larger federal deal is laid off, a casualty of the shutdown.

And the online sites and radio are filled with vitriolic attacks, one party or government body blaming the others for this incredible stasis metropolitan Washington finds itself in.

DC is a government town. It’s kind of like what would happen to LA if all of Hollywood, from movies and TV to interactive and music, suddenly decided to go on strike indefinitely. The titans battle, while the majority of the workforce suffers. It’s surreal, yet happening.

The consequences are mixed, but progressively worsening as the region’s economic engine remains stalled out. As the situation evolves beyond days and into weeks, I wonder if DMV (DC, Maryland and Virginia) will decline into recession.

And then there are the safety concerns. Airlines are left to their maintenance duties without FAA oversight. Here in DC, wholesale portions of the local police force are federal, and some are currently sitting on the bench. For example, will there be drag races on the GW Parkway? Certainly somewhat amusing, but you can imagine a lot worse happening without the long-term presence of police.

That’s what it’s like to live in DC right now.

When I listen to the PR blame war, I can’t help but think that you just can’t put lipstick on this pig. Our politicians aren’t public servants. They’re selfish power-brokers, ideologues throwing mud at each other while those of us that actually live in this city are affected — some worse than others. We are all powerless over the ship of fools running the United States of America.

Shutdown or open for business, our government is broken.