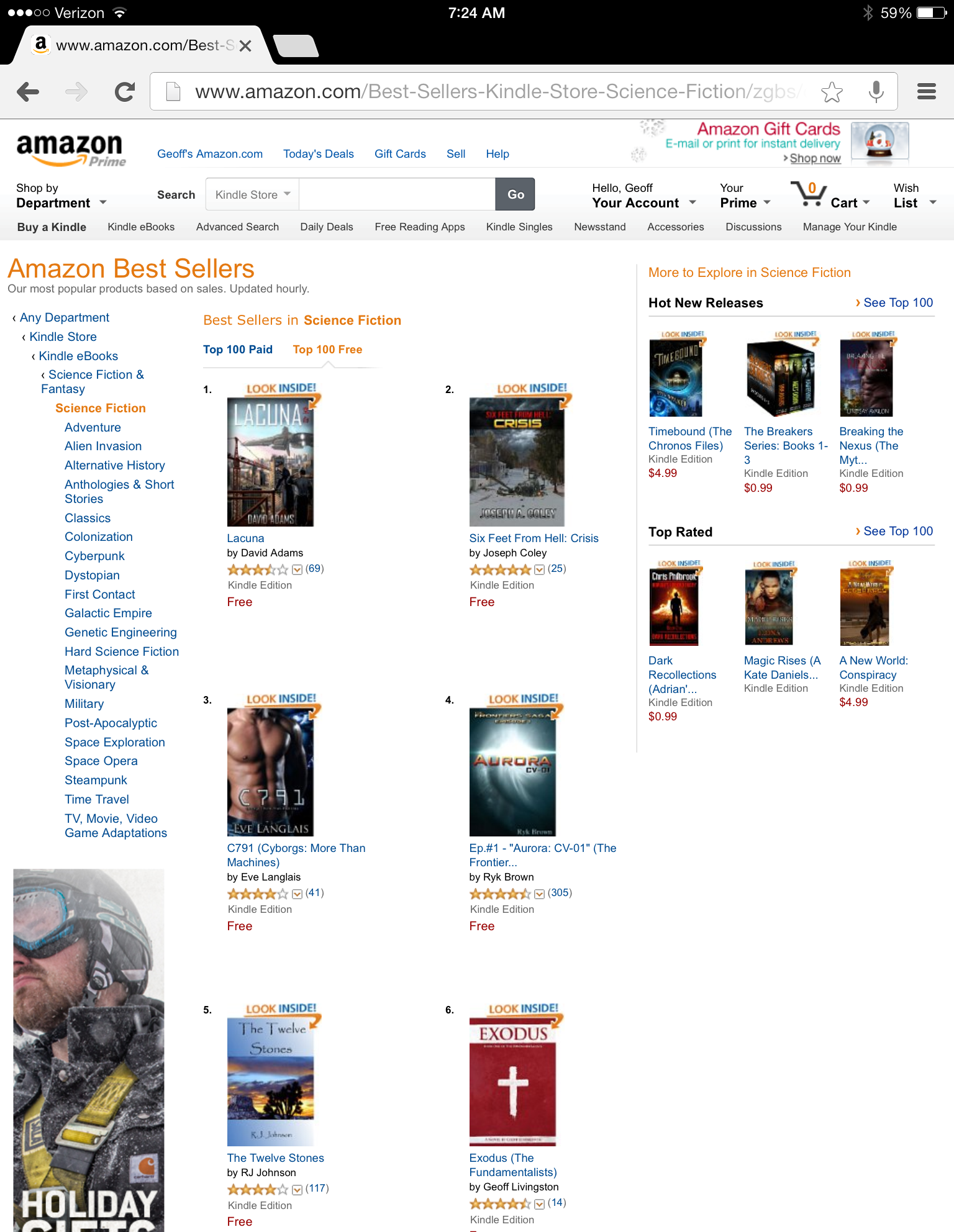 Last week turned out to be a fantastic for Exodus. More than 2000 books were moved, and when I woke up on Christmas morning, the book was ranked #207 on the Amazon Kindle free rankings, and number six in the science fiction category (I engaged in a modified version of Brian Meeks’ strategies).

The success brought some interesting commentary (cough) from some more devout Christians who weren’t pleased with the depiction of a medieval-like fundamentalist state that used their faith to conquer others. This post is not a response. I did want to take the opportunity to clarify my views on fundamentalism, Christianity or otherwise, for friends and readers who may be curious.

As to the hate mail itself, I expected this when I published the book. I don’t believe hardliners will actually get the message. As soon as the more devout read the first chapter, they’re certain that I am a heretical liberal. By the fourth they may think I am in league with Old Scratch himself (thus the preface from Paul Dunn).

To be clear, I read every remark to see if it’s an actual critique of the book, or someone ranting that Christianity was used as an example of fundamentalism. If it’s the prior, I pay attention. If it’s the latter, I ignore it. Welcome to America and The First Amendment.

I believe that any faith is capable of helping people enjoy life more. That includes Christianity, Islam, Judaism, Bhuddhism, and others. I personally believe in God. I also believe that humans are capable of taking any faith, and warping its words to achieve wrongdoing.

I don’t think Islam is a violent religion. In fact, I quite like Sufism. Unfortunately for the faith of Islam, violent extremists use it to justify their actions. And that creates quite a lot of ignorance and stereotypes about fundamentalism.

Back to the impetus for this post, I have seen many benevolent acts performed by Christians. The faith (in its various forms) offers incredibly powerful teachings for anyone who wants spiritual guidance. In fact, while not a Christian, I say the Lord’s prayer several times a week, my wife is of Presbyterian decent, and most of my friends are Christian or of Christian descent.

Yet like any other faith, people can use its words to justify great wrongs. You can look back at the Crusades for an example. Or more recently at the IRA terrorism of the 70s and 80s, or in the Unted States the KKK’s acts of racism and violence. I have experienced this personally in my life. Many people have tried to convert me, or explain to me how I was going to hell because of my decent. You could argue the Christian right’s political impact in our country could (not will, but could) create similar situations.

As for the faith of my blood, Judaism, some feel Israel’s hard line views towards Palestineans and other Islamic states is also in the fundamental extreme. People are dying in the Middle East, and sometimes at the hands of the Israeli military.

In none of these situations is the faith in question wrong. Rather, people make decisions, and use religion as a justification to take actions that impact their fellow man, usually in a negative fashion.

What’s worse, when blind faith exists or when people generally believe what they are told, we create problems. We see this today in the media and the violated trust we feel when the Lance Armstrongs and government officials of this world let us down. To be clear, this is the power of propaganda, not religion.

Now About the Book

Let’s look at several aspects of fundamentalism in the book. First, it was the Islamic fundamentalism of the present (and a fictional Christian right reaction to it) that provokes the Great Sickness, the apocalyptic event that creates the world of Exodus.

Why not continue with Islam as the faith of wrong doing? For starters, it’s too easy per the earlier stereotype discussion. As a writer it’s about as challenging as depicting Richard Nixon as a villain.

Frankly, I think we have a blind eye in this country to our own actions. Since the book takes place in America, I decided to use our country’s dominant faith, Christianity. And per the conversation earlier, Christianity has been misused by the power-hungry for such purposes in the past. Unfortunately for humankind, history has a nasty tendency of repeating itself.

Several of the characters have intentional names referring to Greek mythological characters and one biblical character, Mordecai. Mordecai represents the true Christian faith (at least as it appears to this Jewish fellow’s eyes). In book two, Mordecai attracts new Christians, but he does so through principled action rather than proselytizing.

The power-hungry leader of the Christian Empire is Pravus, which is Latin for depraved. That should be a clear tip off to folks who think I am engaged in blasphemy. I am not, this guy is fricking nuts. There’s a reason why Mordecai left the Emperor’s side to venture out on his own.

Without tipping my hat too much, the entire trilogy explores the concept that every single one of us is capable of rationalizing wrong with ideologies and belief systems. We think we’re right, that our ideas can protect us from wrongdoing, but in actuality we may be harming others.

This is true for every human, and there are many ideologies — not just religious ones — that can be used to justify wrongdoing. Evil is rarely a dramatic moment. It is often the result of small decisions that collectively point someone in the wrong direction.

OK, I’ve said my piece. The floor is yours.