Will the House of Cards Stand?

Netflix released House of Cards Season Two this past Friday. Like other avante garde TV series from disruptive non-traditional networks, it created quite a stir. But does the show owe its buzz more to Netflix’s strategy of releasing a whole season at once than people actually watching the program?

Let’s be clear, Netflix generates a ton of publicity through its whole season release strategy (hat tip: Andy Sternberg). Even President Barack Obama is excited about the Washington drama. 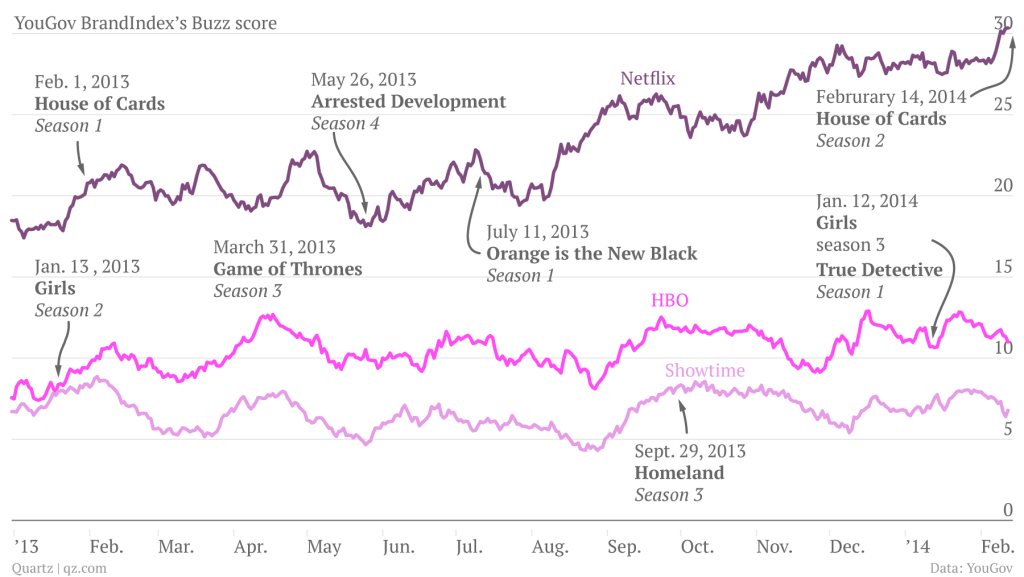 Given that word-of-mouth driven online buzz fuels as much if not more viewership than actual network promotions today, one could argue that House of Card‘s PR strategy, while buzzworthy may work against it in the long-term. Without a weekly episode, the program can’t maintain buzz through a season or a year.

Also what if competitors decide to follow suit and release whole seasons at once? Beyonce followed a similar surprise strategy with her most recent album. Will other television producers follow suit? Certainly, the strategy looses its sheen when others partake in the same approach.

But I don’t think Netflix has too much to worry about on that front. I’m not sure other networks will be quick to give up their weekly fix of viewer driven buzz. Let’s take a deeper look at some data. 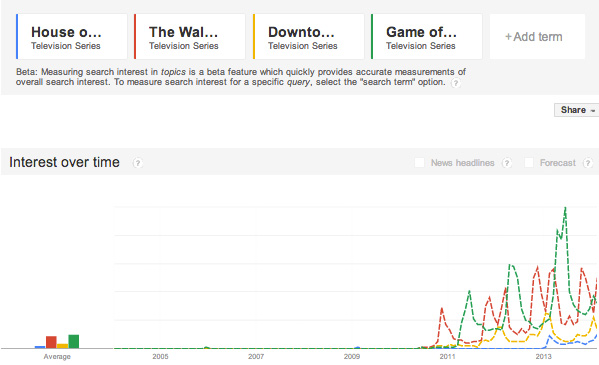 The above Google Trend analysis shows that other relatively well known newcomers from non-traditional networks are far outpacing Netflix’s House of Cards when it comes to search. The blue line is the TV show House of Cards, yellow is PBS’s Downtown Abbey, red is AMC’s The Walking Dead, and green is HBO’s Game of Thrones.

When people want to find out more about the show, it’s clear that the latter three shows are all benefitting from season long buzz with spikes depending on specific episodes (the massive green spike is the infamous Game of Thrones Red Wedding episode). House of Cards‘ social buzz and media hype is not translating to people seeking out the show through conventional search. 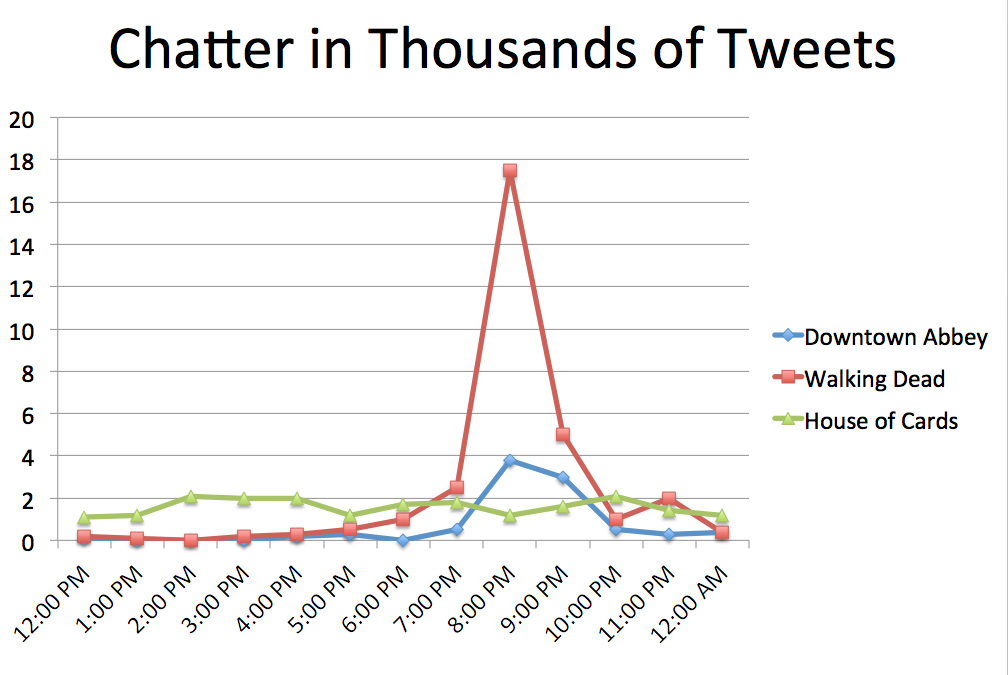 The above chart measured the shows’ official hashtags on Sunday via Hashtags.org. the three shows that were active that weekend — House of Cards, Downton Abbey and The Walking Dead.

House of Cards enjoyed steady traffic compared to the spikes enjoyed by its competitors. In total, it doubled Downton Abbey‘s tweets for Sunday p.m., and achieved about 2/3 of The Walking Dead‘s. However, Monday traffic saw a significant drop, in spite of the federal holiday. 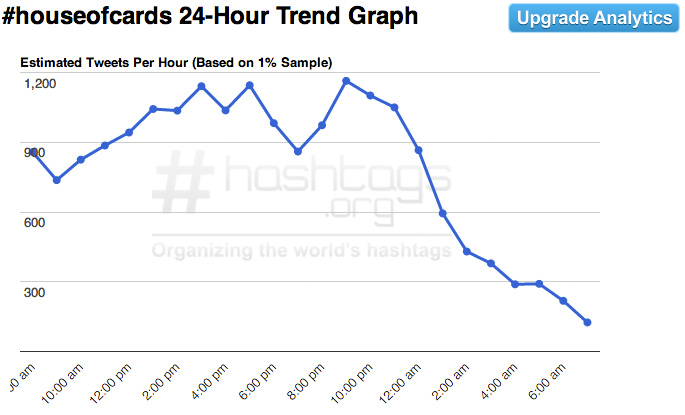 House of Cards word-of-mouth buzz is not sustaining. I imagine as the weeks pass and the season release buzz fades, #houseofcards chatter will continue to lessen while its competitors will chug along with their weekly spike.

You can infer how the numbers might work out over a period of months. The other shows benefit from weekly releases in the overall cumulative total, while #HouseofCards will level out until its next season release.

It’s not that House of Cards isn’t a good show that may grow in viewership with more seasons. But its release strategy seems to be more of a gimmick than a sustainable method that can be applied across the entire media market. We have seen PR generate tremendous buzz in the past without producing business results. This might be another example.

Even Netflix may recognize the House of Cards release paradigm is not sustainable. The video on demand service will move to a gradual release strategy with its first kids program, Turbo Fast.

It doesn’t help that only 29 million people subscribe to Netflix with more than 20% of subscribers living abroad. But then again, HBO ony has 28 million.

The difference? HBO lets non-subscribers buy individual episodes as do PBS and AMC. House of Cards requires a Netflix subscription, which limits access to those who might be interested in the show sans the full service commitment.

What do you think about the House of Cards buzz?