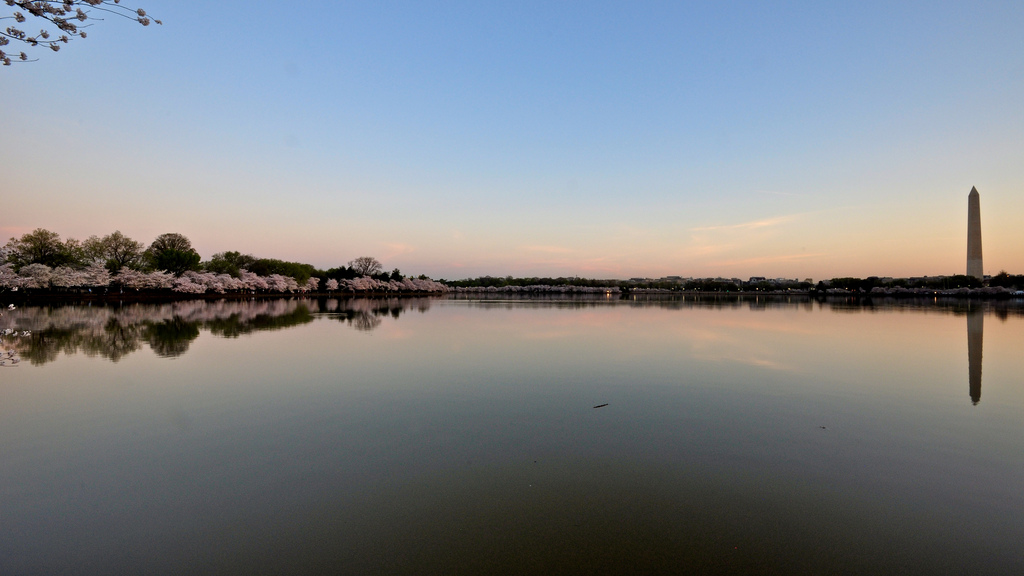 I am really looking forward to Wednesday morning’s Cherry Blossom photoshoot with Ann Tran at the Tidal Basin. It’s really my favorite photoshoot of the year because of the incredible light options you can see.

Shooting manually on a DSLR teaches you that light is everything when it comes to photography.

Whenever I take a photograph my first concern is lighting, especially since I prefer shooting manually sans flash. As important as storytelling and framing are to a photograph’s success, nothing matters if the lighting is off.

Sunrise at the Cherry Blossom Festival offers a confluence of light options. First you have the sunrise itself. This is the golden hour, that first hour of light after sunrise or the last hour of light preceding sunset. The light refracts perfectly, producing a soft golden hue that illustrates gorgeous canvasses, and offers great contextual shadows. In particular, dawn is nice during the Cherry Blossom Festival because the Tidal Basin is less busy and you can still walk around.

We’re starting at 7 a.m. on Wednesday, but I’ll probably get down there early to watch the sun rise on the basin. The rising light offers incredible possibilities. You can take standard shots like the classic sunrise photo with burned yellows, oranges and reds. The above featured photo was a shot I took at the 2010 festival from the Jefferson Memorial (which is the dark shadow reflected in the Tidal Basin foreground). 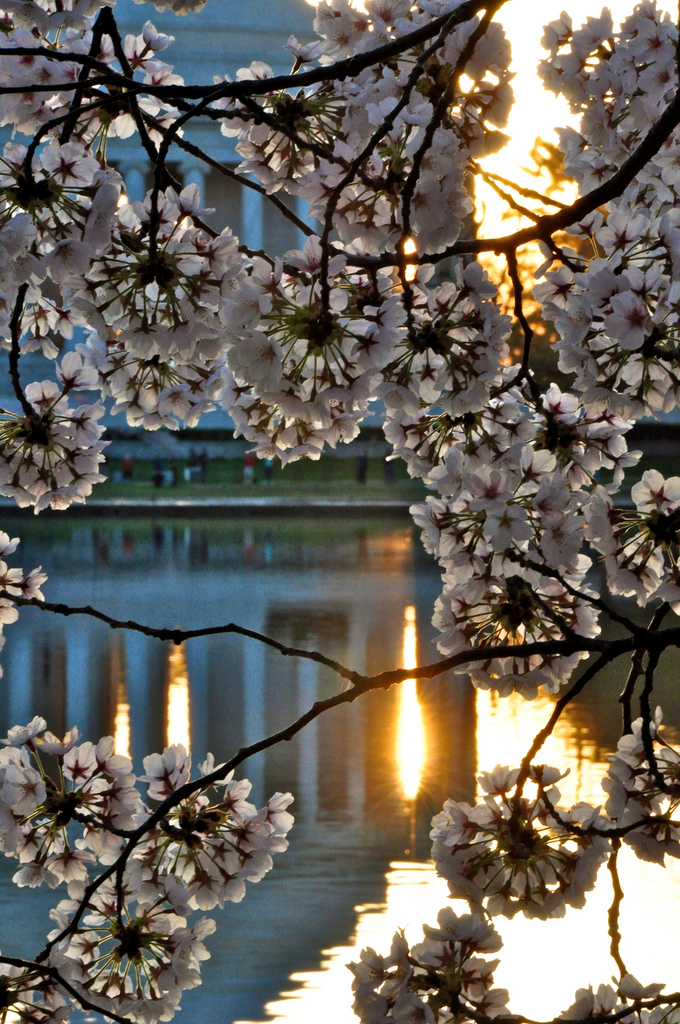 The Cherry Blossom Festival photo shoot includes the water contained within the Tidal Basin, which when still mirrors light perfectly. Finally, you have the cherry blossoms themselves. Because they are white and soft pink, they reflect the light, too. As a result, they can look white, vibrant pink, soft yellow, or even light blue depending on the time of day and hour.

The above shot combines all of these elements. First of all, it should be noted that the blossoms are backlit by the sunrise as opposed to have the light reflect on them directly. This breaks “the rules” a bit, but because they are cherry blossoms they absorb the light and still show well with a blueish yellow tinge.

Second, even though the shot faces the sun directly, the Jefferson Memorial blocks the light enough that it is not harsh. Rather it is perfectly golden, a result of that first hour of light. Finally, the water reflects the memorial perfectly, allowing you to see that sun is indeed rising. Thanks to the framing, the sun appears to rise between two pillars.

This shot is one of my all time favorites because it captures every light element the Cherry Blossom Festival has to offer. It has layers of subjects and light fields, which makes it fun to look at.

When you come to understand how a camera takes pictures, you can figure out how to capture a subject with the right lighting. You understand how shutter speed can be delayed to capture continuous light. You may decrease light sensitivity (ISO) to allow for a longer shot. Finally, you may (or may not) increase the f-stop to open the lense and take in a wider field of light, which in turn creates depth of field. 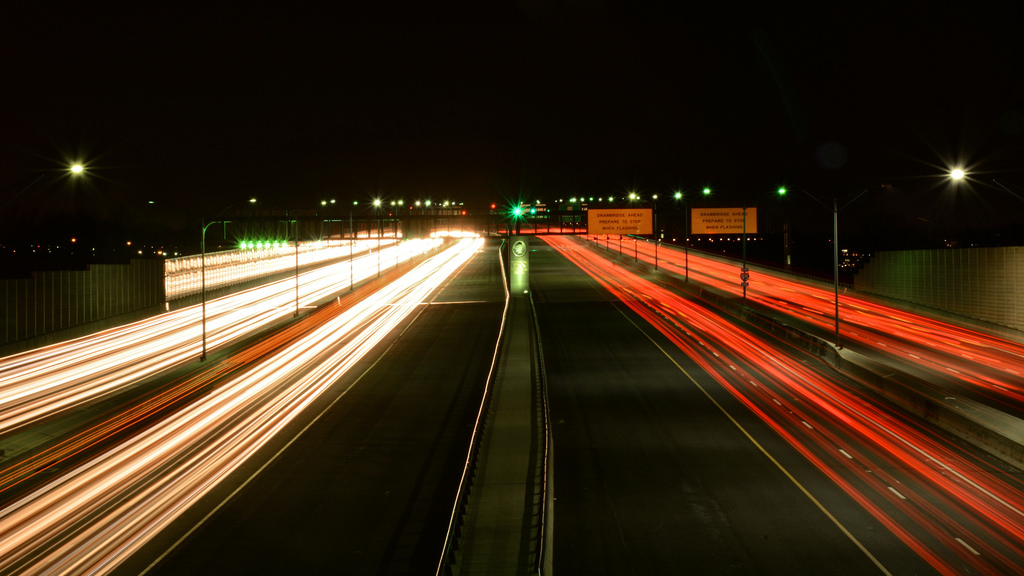 I took the above photo of the Woodrow Wilson Bridge portion of Capital Beltway (I-95/I-495) earlier this week from the George Washington Parkway overpass. It was taken at the low ISO setting of 100, which is the minimal light sensitivity. The shot also was taken with the maximum f-stop of 32 (as wide as the lense could be opened). Both the ISO and f-stop settings were the opposite of what an automatic setting would take at night.

To compensate for these sacrifices, I also turned the shutter speed settings off, and manually shot the photograph for two minutes and six seconds. The camera was “mounted” between two poles on the overpass, assuring that there would be no vibration.

The result was a time lapse that fails to capture a single image of a car on one of the country’s busiest highways. Instead it captures the head and tail lights of many cars, coming and going, creating an incredible representation of speed and traffic.

You’ll see photos like this periodically, but they are not easy. I thought about how to take this shot the entire day prior to actually walking on the overpass. 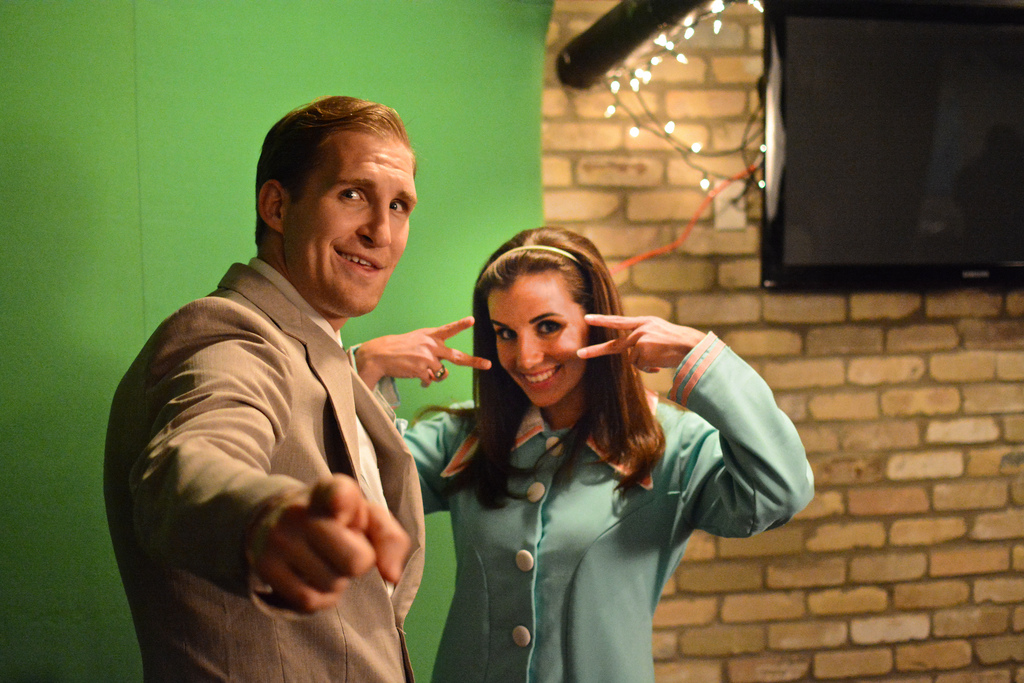 This next shot uses the opposite camera settings. The f stop is minimal creating a very shallow depth of field. Only the gentlemen’s face is completely in focus, in turn creating a cool effect with his index finger in the foreground.

The ISO setting is very high at 5600 and the shutter speed is fast (1/80th of a second), which allowed me to shoot manually sans flash or tripod. On the left side you can see a green screen, and that is lit by a professional photographer’s lighting rig on the right. This created a rich lighting scene with deep shadows.

I do think that whenever possible, flash-free shots feel more natural. I still have much to learn about flash, but my attitude remains the same about it. A shot should seem naturally lit and flash should augment the subject, not dominate or alter a scene.

Overall, you can see that light shapes everything that happens with a camera. It is the paint that makes the portrait.