How to Take Dreamy Night Photos 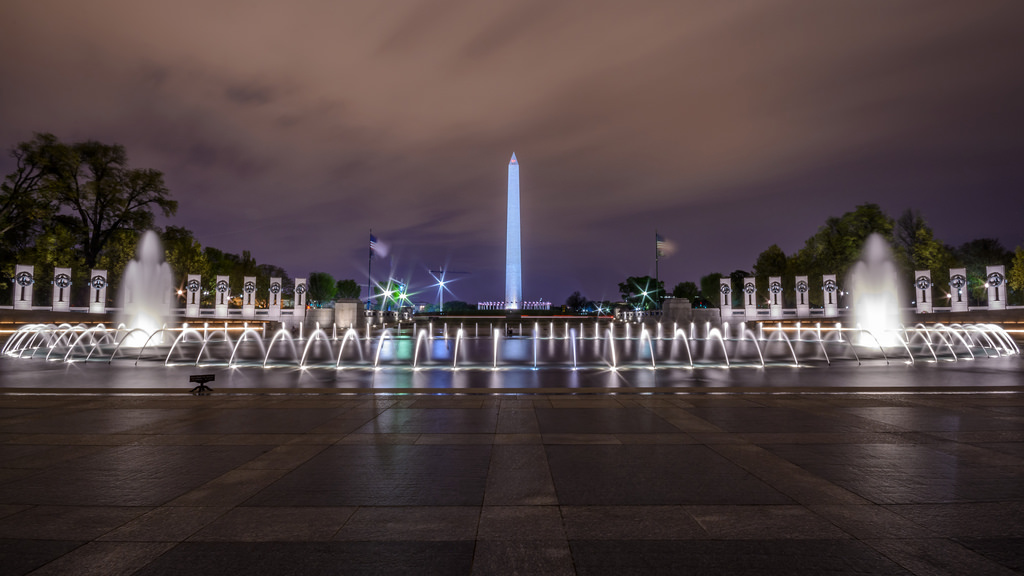 Several folks asked how I capture these crazy dreamy night shots. They feature exquisite, subtle and rich light throughout the photo. Tungsten lights are portrayed as stars. In fact, several people have asked if I am using a star filter.

First, I don’t use a filter to create that star effect.

In fact, I don’t use any filters outside of anti-haze or ultraviolet dimming. Anyone who owns a DSLR knows these are pretty standard issue for screw-on lens filters.

Instead, I use long exposures. Meaning, I fire the camera manually or at a minimum, an extremely low shutter speeds of 25 or 30 seconds. 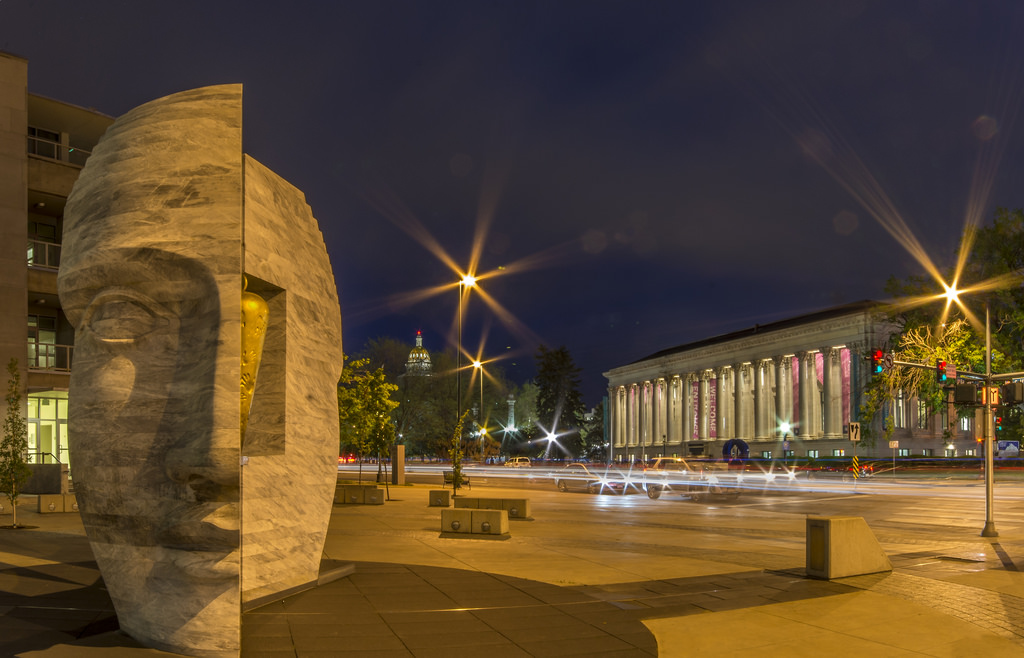 In order to capture a dreamy image with a long exposure, I do a couple of unconventional things for night photogprahy:

I lower the light sensitivity to the bare minimum of ISO 100. That allows me to do two things: Record light very slowly throughout the whole field of the shot. That’s why almost the entirety of the shot is seen, and is not blacked out. Even the clouds are seen, reflecting the light from the city below them.

Low aperture (ISO) sensitivity also allows the camera to “turn a deaf ear” to the actual lights in the photo. In essence, the camera doesn’t see them as super bright orbs of light polluting the whole picture. Instead, the camera records how lights emit onto the larger field, in turn producing a star effect. The star appears differs based on each lens’ aperture mechanism (the way it opens and closes to recrod light), but it always appears.

Another critical aspect is a high f-stop, or field of view. F-stop is usually lost on most amateur photographers, but in this case it’s important to max it out for a night shot. Low f-stop means the picture will record the details of what it focuses on, and as the lens records light away from the focal point a blurring effect takes place. High f-stop records more detail images away from the focal point.

You want the camera to be able to focus as much as possible on every aspect of the photograph, to help reduce blurring. Further, it helps record the details of the image, allowing all of the light in the night scene to appear clearly.

A tripod is necessary to capture time lapse images. There’s no way you can shoot one of these with your hand. Absolute stillness is required.

The overall effect is as seen. Usually, people will walk in and out of the image, and are not recorded because of the long lapse. They have to pause for a significant amount of time to be recorded (see below MLK image). Also, cars are usually recorded as red and white streaks (see above Easter Island statue pic), a light representation of their tailights coming and going.

What About the Edits? 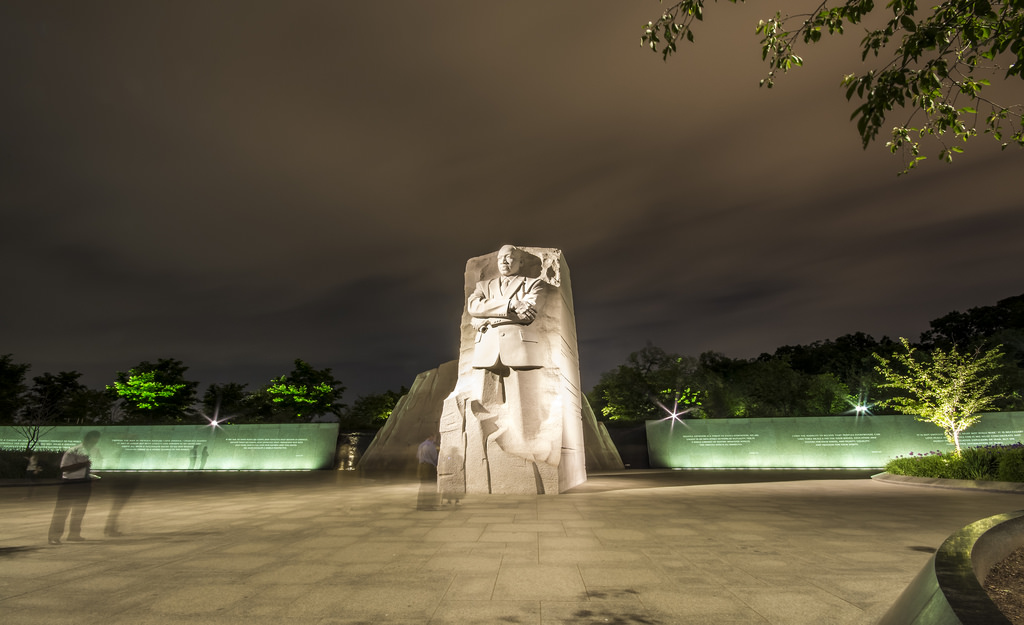 In the case of the MLK photograph, I used a Sigma 10-20 mm wide angle lens. Sometimes a wide angle creates a bowing effect, but because the subject was centered and close, I got lucky. The f-stop was at 22.0, the focal width was 10.0 mm, and the shutter speed was manual, a total of 102 seconds to capture the photograph.

The edits don’t take long for a capture like this MLK photograph. Usually, you open the RAW image and the photograph is 3/4 of the way there. In this case, I didn’t need traditional Photoshop outside of cleaning up two random light spots, dust specks, and an almost white cloud element. I performed no dodging or burning (lightening or darkening of any particular elements in the photgraph) on this image. 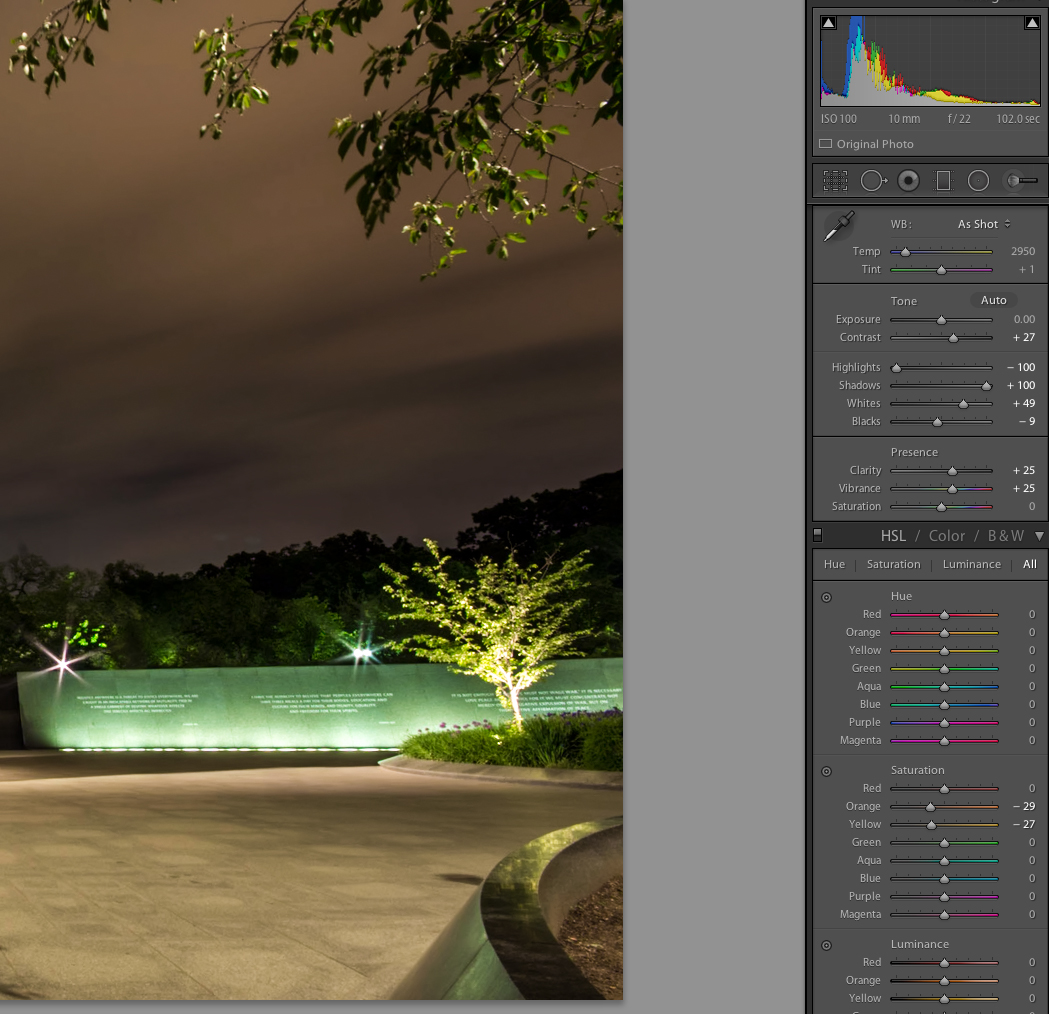 The Lightroom edits (see above panel) were meant to make the photo pop, and add that dreamy element. These are techniques I learned from Serge Ramelli.

First, I reduced the highlights all the way, which further minimizes the glare from brighter lights in a slow night capture. Then I opened up the shadows all the way. This shows off all of the rich light captured over a slow period of time. The shadows still look like shadows, but all light that is there to be seen pops.

I then upped the white light elements and lowered the black elements to the point that they started to create small “burn” patches in the photograph or render zero color. I only allow a miniscule amount of burning because it basically ruins a photograph. Maxing out white and black adds more drama and contrast. Finally on the main editing panel, I upped contrast, clarity and vibrance to further make the photo pop.

You’ll notice in the individual color panels, I reduced the saturation of the orange and red light by 1/4. After the above edits, the clouds came out almost Martian, and while the effect would have made for a nice sci-fi picture, the depiction of the sky was not an accurate showing of the clouds. So I ratcheted these two shades back slightly to restore balance. 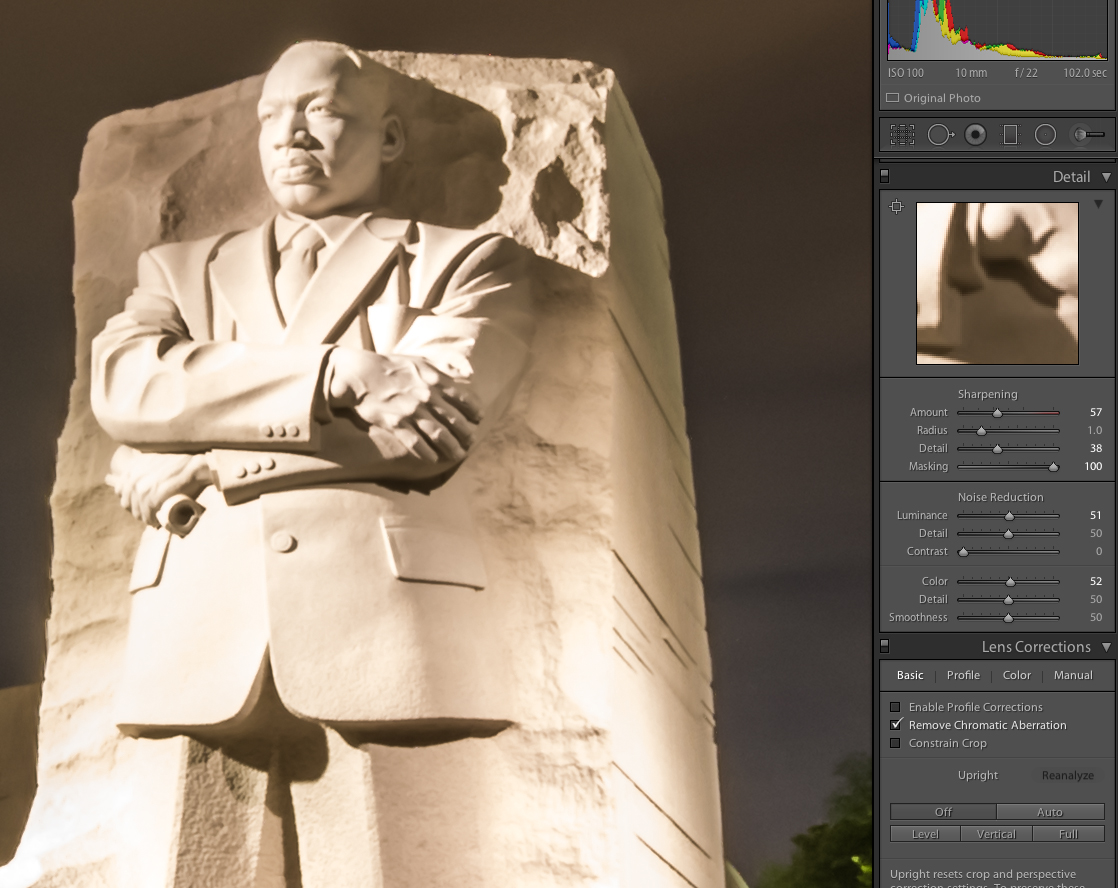 My final edits occur with sharpening. Almost every photo needs sharpening. You’ll see from the panels, I mask my sharpening all the way (or close to it) with almost every shot. When I do this, I am sharpening only the edges of subjects in the image, and not the overall picture. This allows me to avoid too much grain when I sharpen.

Further I use a healthy does of luminosity to reduce grain, and add a glossy/watery effect to the image. If you go beyond 50+ on luminosity you tend to have a dreamy effect in your image which can be cartoonish. Be careful.

For a reference point, below is a raw unedited sister image of the MLK memorial. You can see that all of my edits were cosmetic in nature. For the most part, the image was accurately rendered by the slow capture technique. I think each photgrapher has their preferences on editing, so you’ll have your own look! 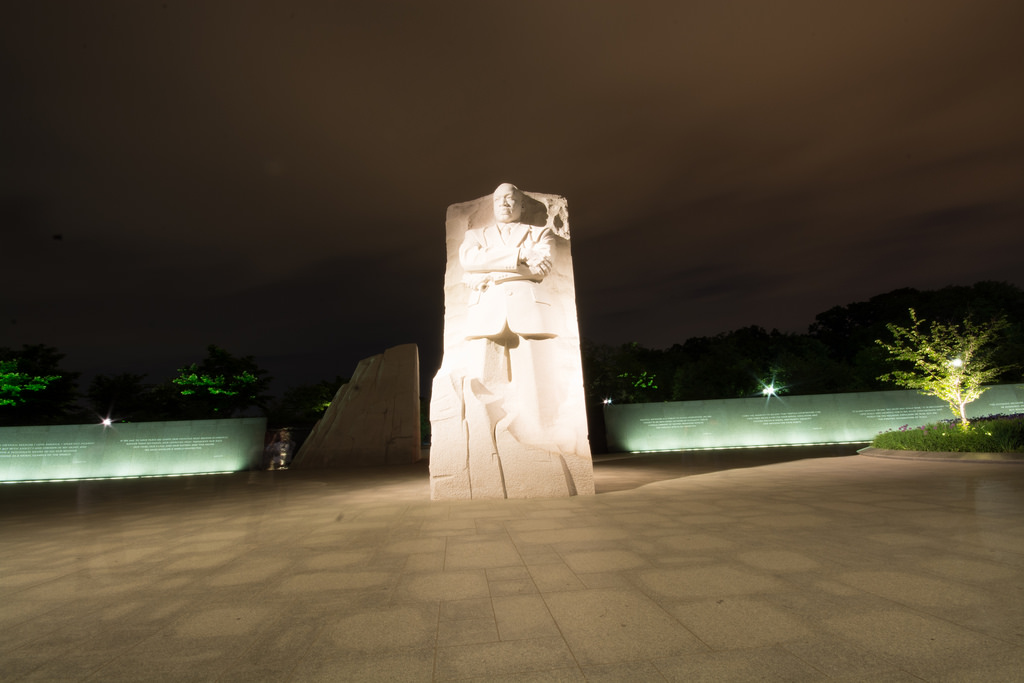 So that’s how I create these crazy night images. What do you think?