The Enemy Found, a Preview of Perseverance 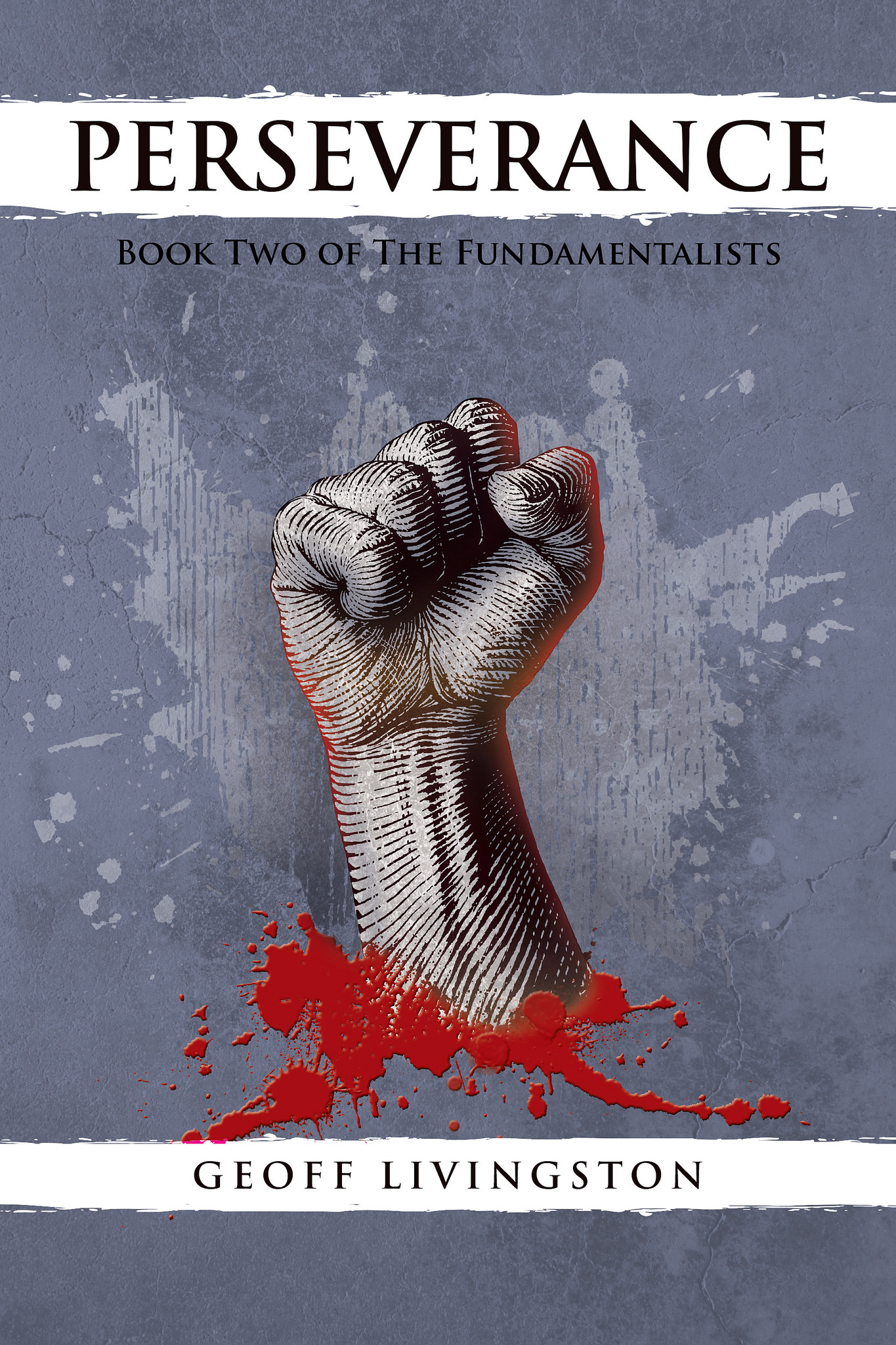 After many iterations, the sequel to my first novel, Exodus, is being released on July 27. At 160 pages, Perseverance is either a novella or a short novel, but don’t let the length fool you—it’s non-stop action crescendoing in an epic battle. In fact, you may hate me by the end of it because I kill off some favorite characters.

“Geoff has dove into fiction writing like a dog after a bone,” said Author of Amazing Things Will Happen C.C. Chapman. “While the first book was fun, he took it up a notch with this one. The characters are more developed, the action more fierce and the story line much richer. You’ll end the last page filled with an urge to know what comes next and angry that you have to wait to find out!”

The following is Chapter Seven of the new book, “The Enemy Found.” I hope you enjoy the preview. You can also order the book on Amazon here and on the iUniverse site here.

Concealed by a line of pines protecting the Cache la Poudre River, the Watchmen looked upon their enemy. The Christians still wore black tunics with white crosses, but they also had a motley collection of furs thrown
over their shoulders to keep warm. Weatherworn tents were set around the camp, and steam rose from a pot over the fire. A series of birdcages were sitting within the group of tents.

“We should all ride back now,” said George. “The Elders need to know so they can prepare the village for combat or evacuation. We may need to retreat into the mountains.”

“We’re not going anywhere this time,” said Charlie, who assumed the role of the Watch leader since Hector had become an Elder. “There is no way the village can handle another move like that. The first heavy snows
will come any day now, and we’re already scrambling to feed ourselves through the winter. We need to stay and recover now.”

“If Jason were here, he’d insist on informing the Elders immediately.”

Charlie straightened his lanky frame and glared at the Watchman.

“Aye, and he’s not one of us anymore, boy. And Hector isn’t Watch commander anymore, is he?”

Realizing that he had spoken out of turn, George nodded and left it at that.

“Okay, fellas, let’s work together here,” said Patrick, a grizzled, middleaged fisherman turned Watchman. “No one expected the Christians to follow us out here, at least not this quickly.”

“They must have had scouts following us. How else could they have Perseverance found us so fast?” Charlie scowled as he pulled out his knife and began sharpening it.

Patrick nodded. “Four tents and four men, so no one is watching us now.”

“Why would they trail us like this?” said George. “Why are we so important?”

“Ha! That’s easy. Mordecai,” said Charlie. “What else would drive an empire to trail and spy on a ragtag group like us? Who else could inspire this desire for conflict? If it was just us, they would have given up somewhere around the Mississippi. But when the former head of your church, the former number-two man in the Empire, joins up with a rebel village? You can’t let that go.”

“Oh, man.” George sighed. “How many times did he tell us about Pravus’s lust for power? He punishes anyone who stands in his way.”

“Maybe Mordecai alerted them to our location.” Charlie’s eyes burned as he challenged them to defend the priest. The accusation hung in the air.

After a period of time, George replied. “Why would he go to the trouble of saving us only to have us die by the blade? That makes no sense.”

“I can’t disagree with him, Charlie. That seems farfetched,” said Patrick. No one responded, so he continued. “Well, what should we do, gentlemen? Shall we capture them?”

“No, the risk is too high. There aren’t enough of us,” said Charlie.

“Let’s wait until dark, then we’ll get the horses and leave. We don’t want them spotting us. We’ll head back to the village, get some more men, and ambush them in the morning before they set out. I don’t want any of them escaping to warn the Empire.”

“Sounds like a plan,” said George. The three men settled in and watched the Empire scouts eat their dinner.