In online circles we believe a community manager is someone who cultivates and activates a group or a brand following on a social network. In Africa I met the ultimate community manager, Joseph Mwakima, a fellow busy activating his community and inspiring change in Kenya’s Kasigau Corrdidor REDD+ (Reducing Emissions from Deforestation and Degradation) Project area through word of mouth.

But unlike his American counterparts, Joseph doesn’t use a Facebook Group, Instagram or Twitter as primary tools of his job (though he is on those Wildlife Works community relations officer, he regularly meets with people engaged in projects throughout the region. 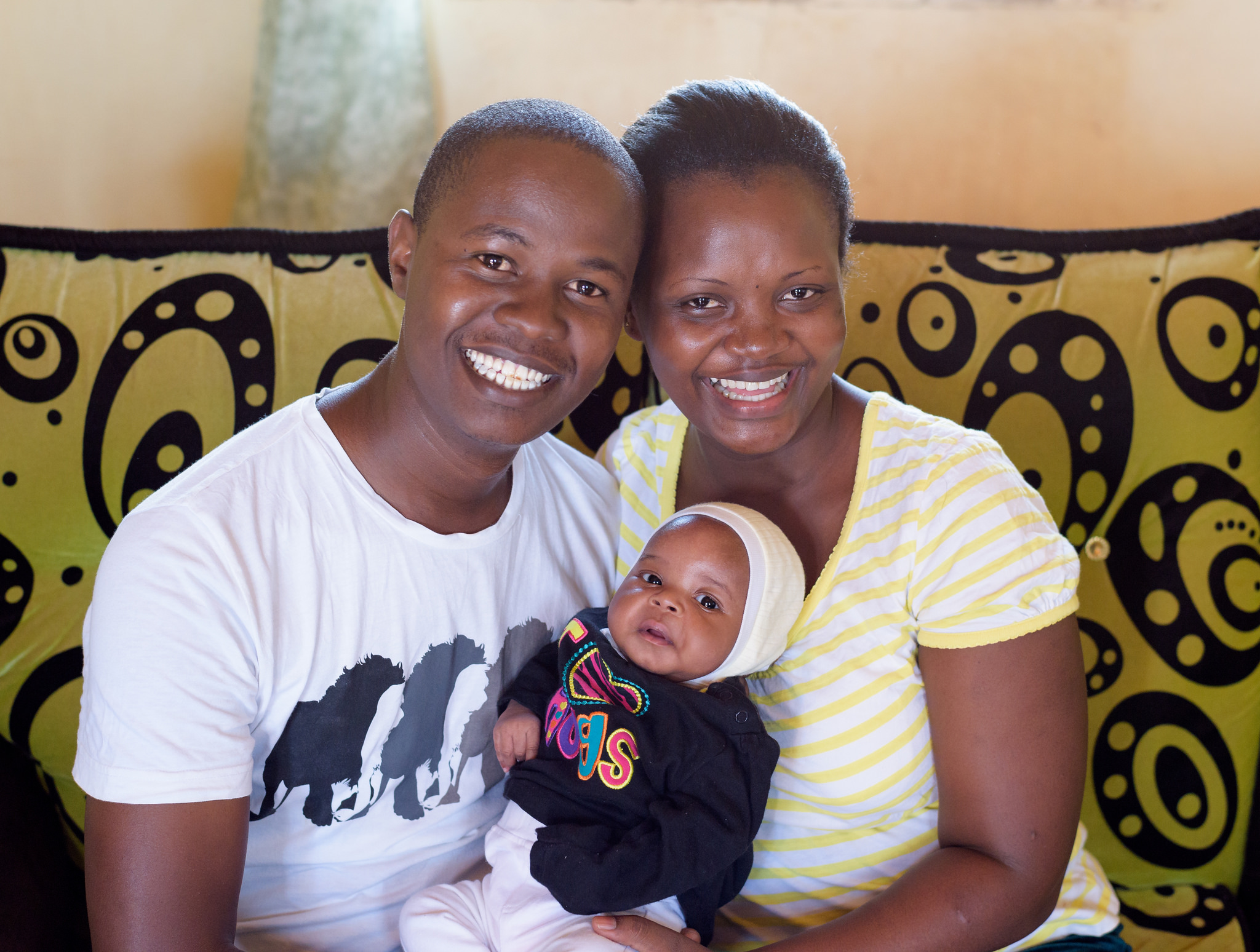 Joseph could have gotten a job in the city. He has a wife and baby, and could easily justify seeking more bountiful land. He’s also college educated, speaks fluent English, and is well travelled. But he instead came back to the region he calls home to make a difference. His community needs him, as does the overall Wildlife Works effort. 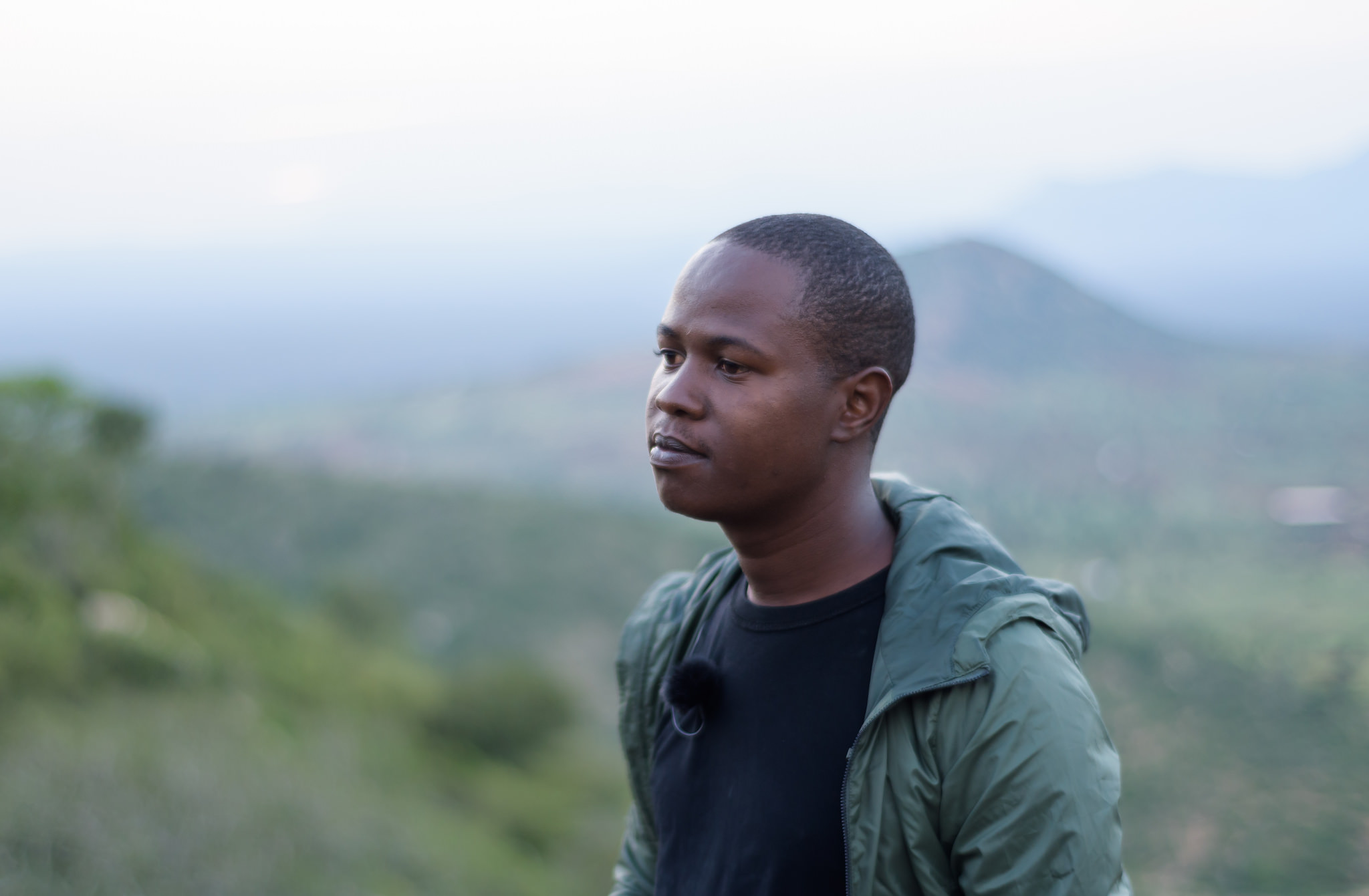 A variety of issues are impacting the region, including rapid deforestation through slash and burn farming and charcoal harvesting, a lack of jobs in the community, and disappearing wildlife. The REDD+ Project Joseph is part of seeks to counteract challenges with a sustainable community development program that creates jobs and protects the forest. 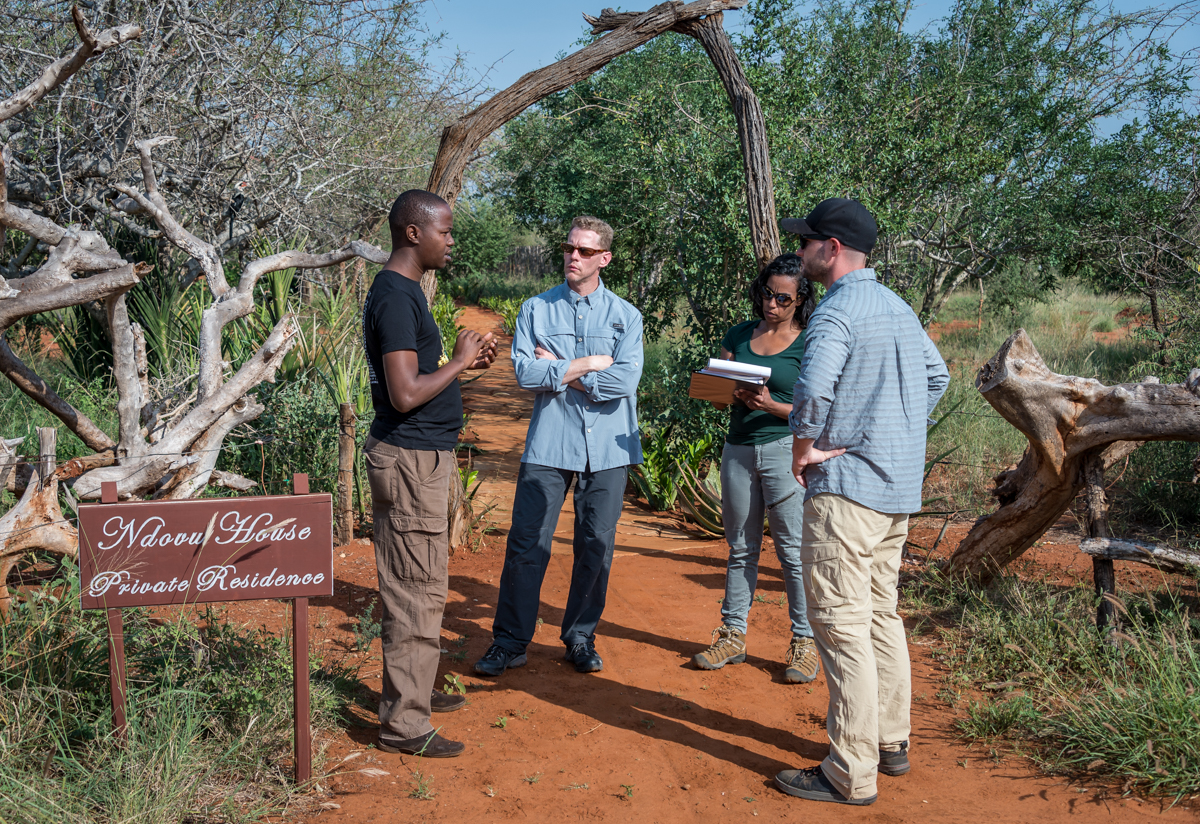 I got to see Joseph at work, thanks to working with Audi as part of its documentary project produced by VIVA Creative (you can see Joseph talking to the VIVA team above). Audi supports Wildlife Works as part of its carbon offset program that compensates drivers for the manufacturing and first 50,000 gas-driven miles of the new A3 e-tron being released this fall. 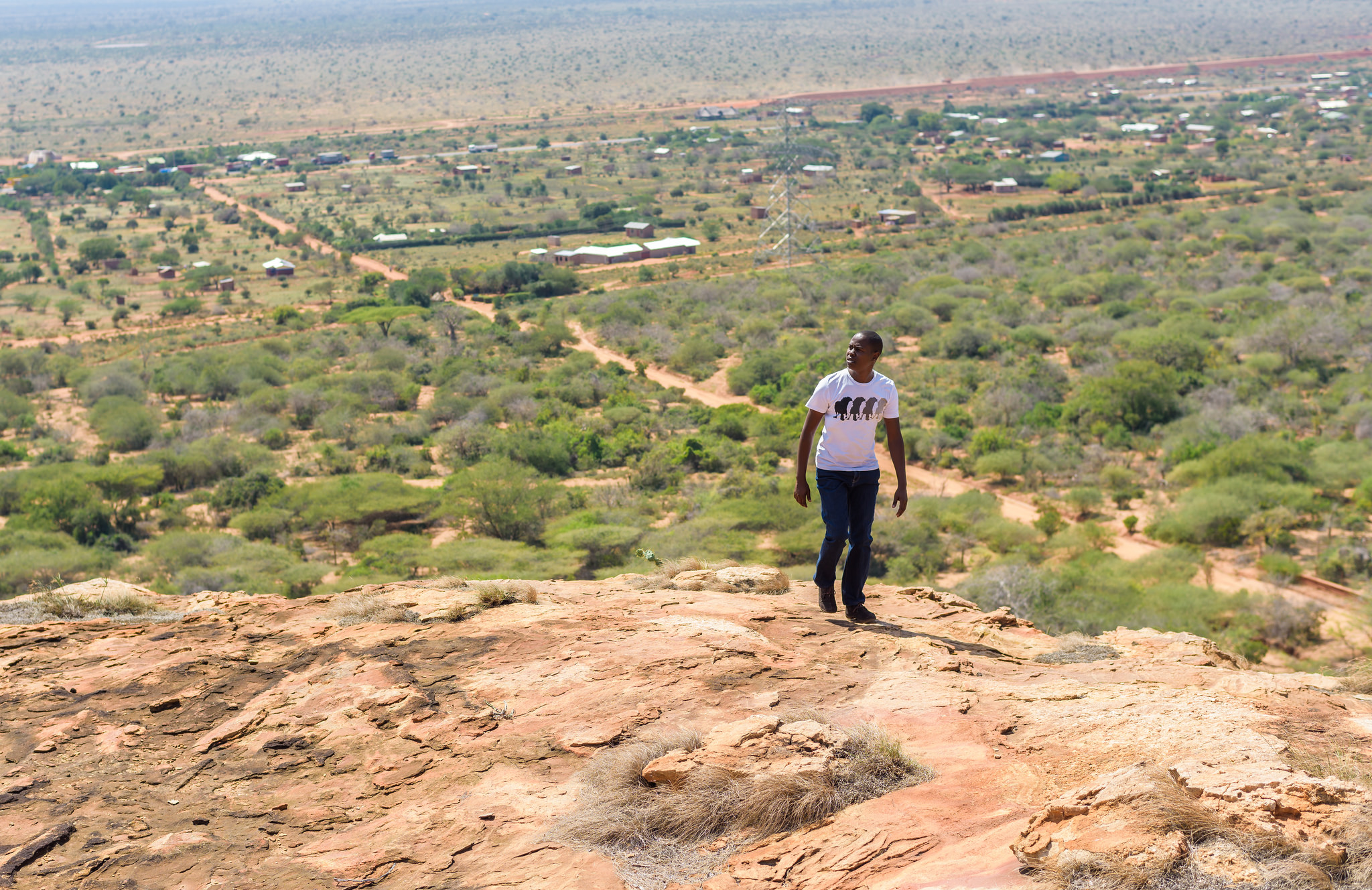 Nestled between Kenya’s Tsavo East and West National Parks, the Kasigau Corridor REDD+ Project is widely considered to be a leader in sustainable carbon offsets. Wildlife Works applies a wide set of innovative market-based solutions to the conservation of biodiversity.

Joseph works in the community to socialize the solutions and encourage adoption of them. Here is what I witnessed Joseph doing: 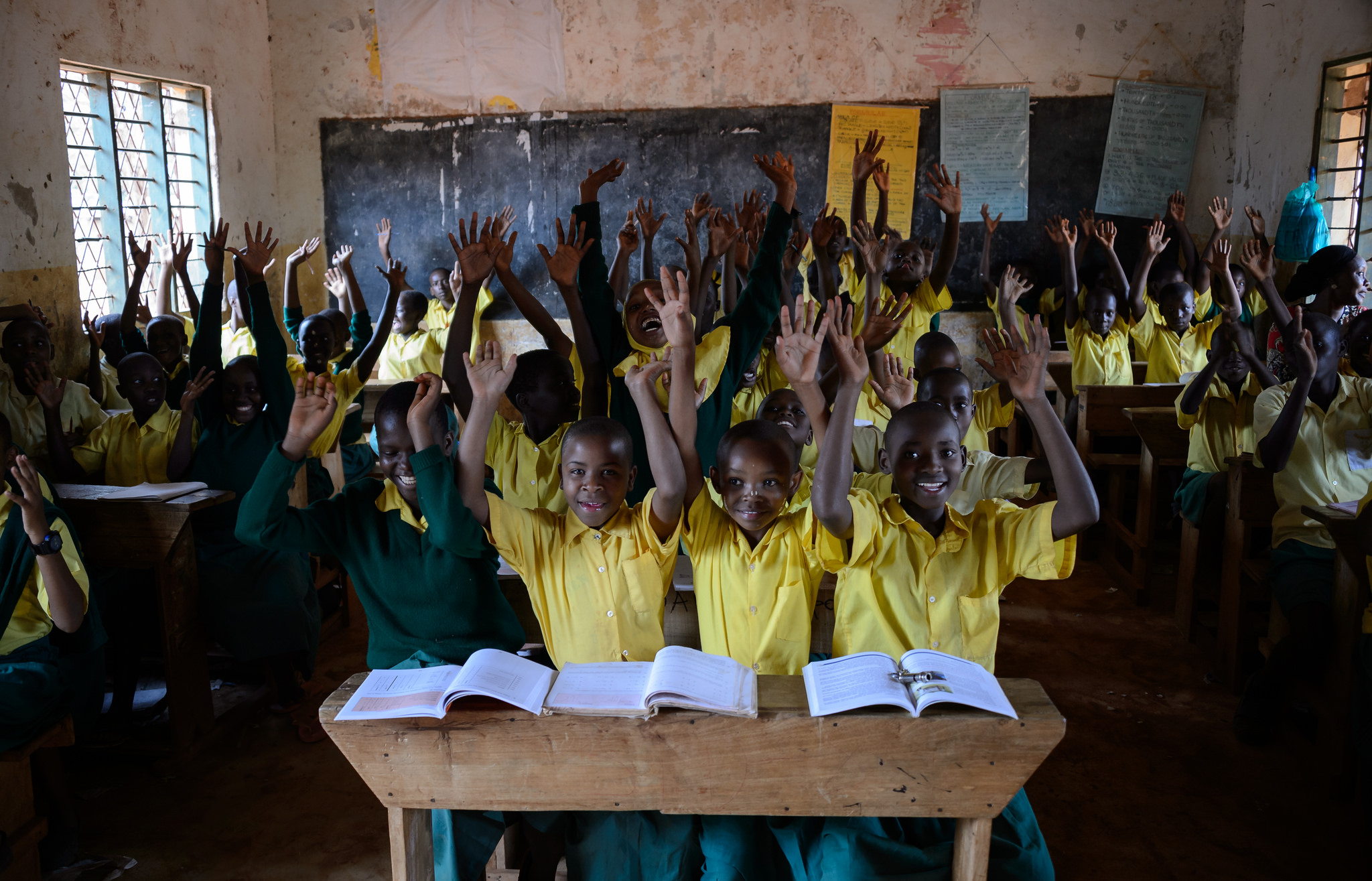 Marasi Primary School hosted a World Environment Day celebration the day after we (the documentary team) arrived. It acknowledged many of the positive changes that have occurred as a result of the community’s fight to stop deforestation. There, I watched Joseph help a child plant a tree, speak with children, and converse with many of the community leaders in attendance. 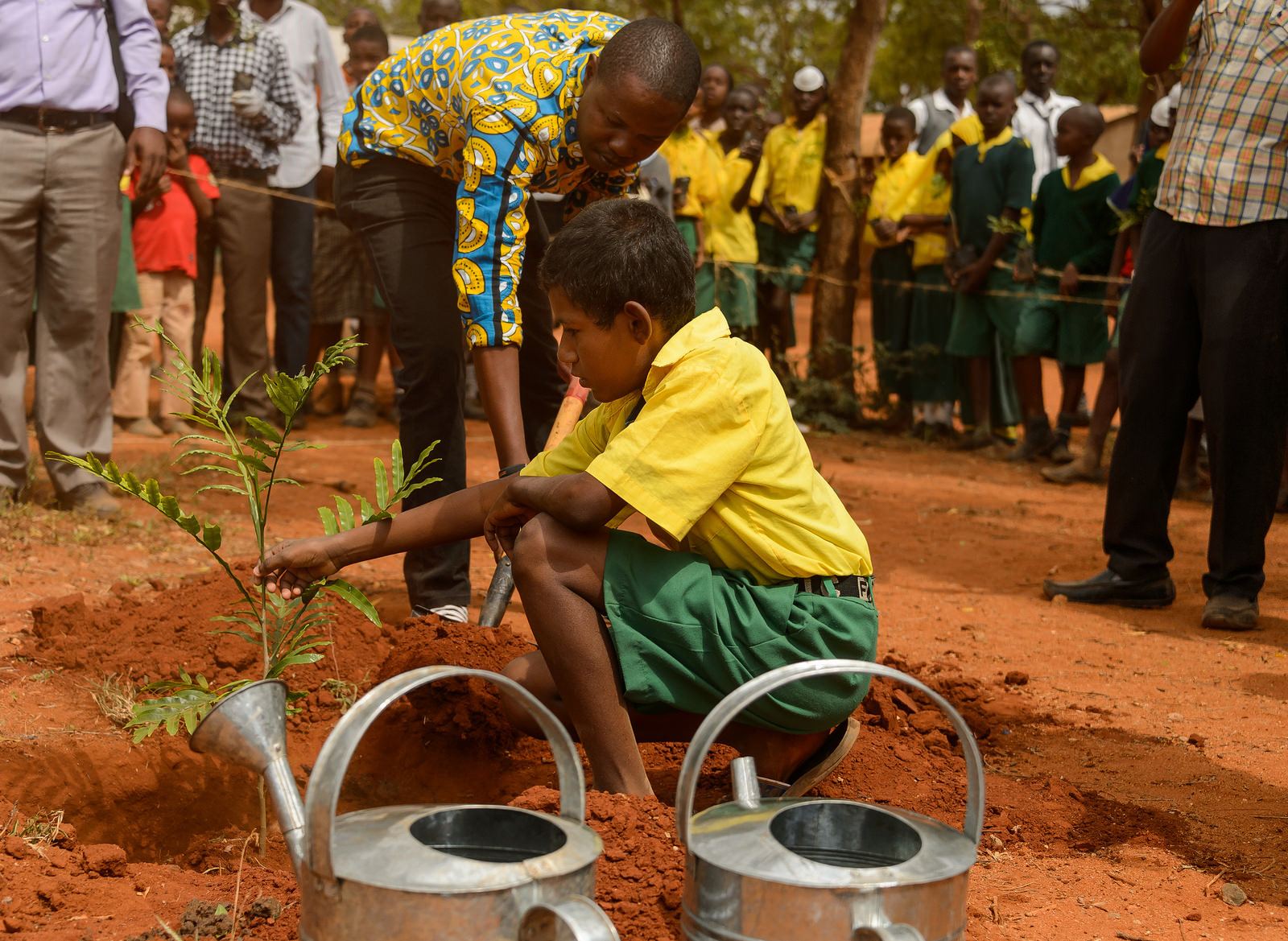 The school in many ways symbolizes the future of the corridor. In total, Wildlife Works pays for the school fees of more than 3,000 students in the area, including partial scholarships for some college students. Most people who work for Wildlife Works reinvest their wages in their children’s education. 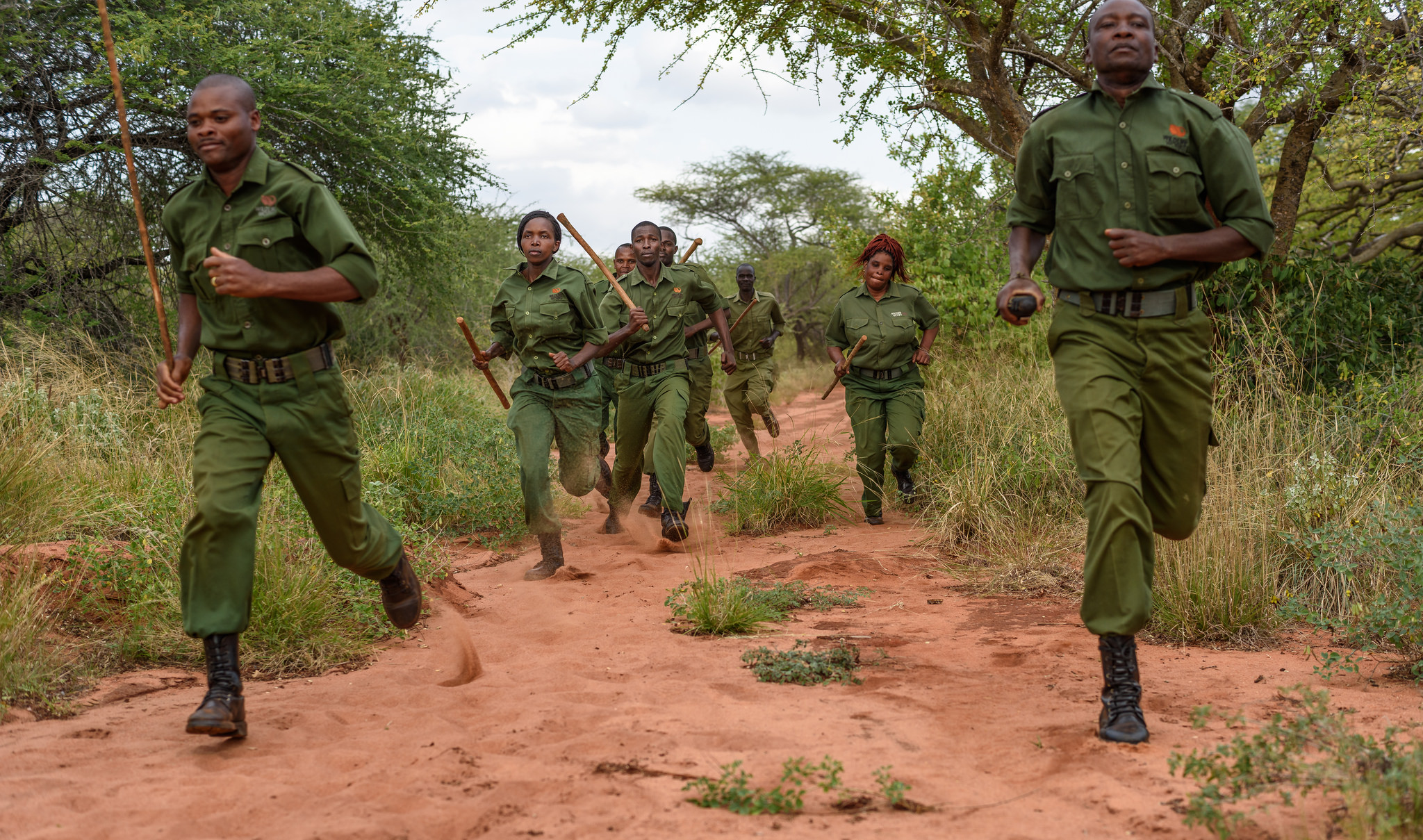 In this picture below you can see Joseph talking with several Wildlife Works Rangers. The rangers are an 80+ person ranger corps that protects wildlife throughout the corridor’s 500,000 acres from poachers seeking ivory. They also stop people from slash and burn farming or from simply cutting down trees for charcoal. So part of Joseph’s job is explaining to them why the rangers are stopping them from using the forestland, and what alternatives they have. 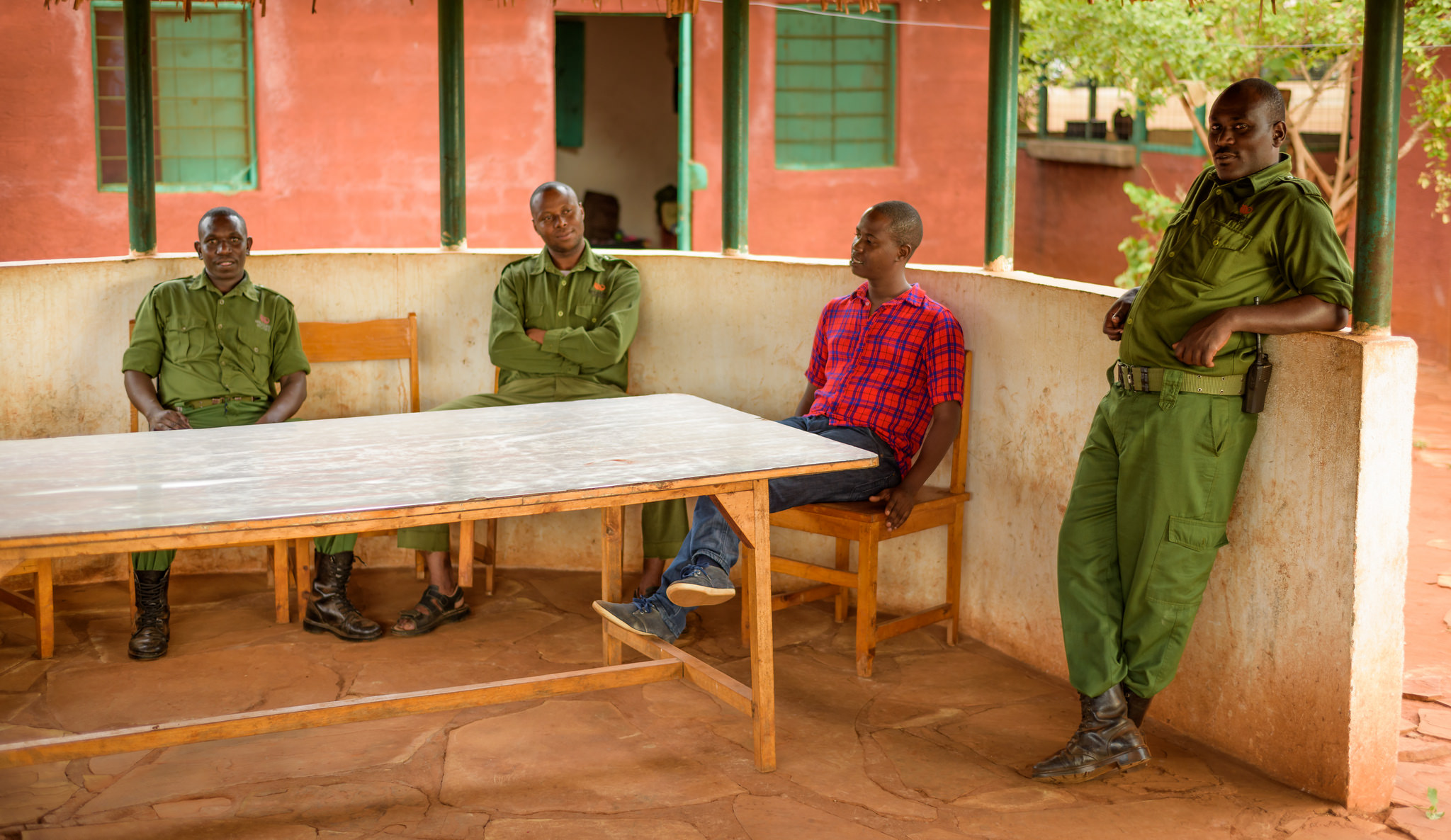 We spent seven days in the company of Joseph and Evans and Bernard, two of the Wildlife Works Rangers. I was impressed by their work, their passion for the wildlife in the Project area, and the danger they face from poachers. A poaching incident occurred on my last day in Kenya, and the pain was evident on their faces. You can see the rangers at work in the Animal Planet reality TV show “Ivory Wars.” 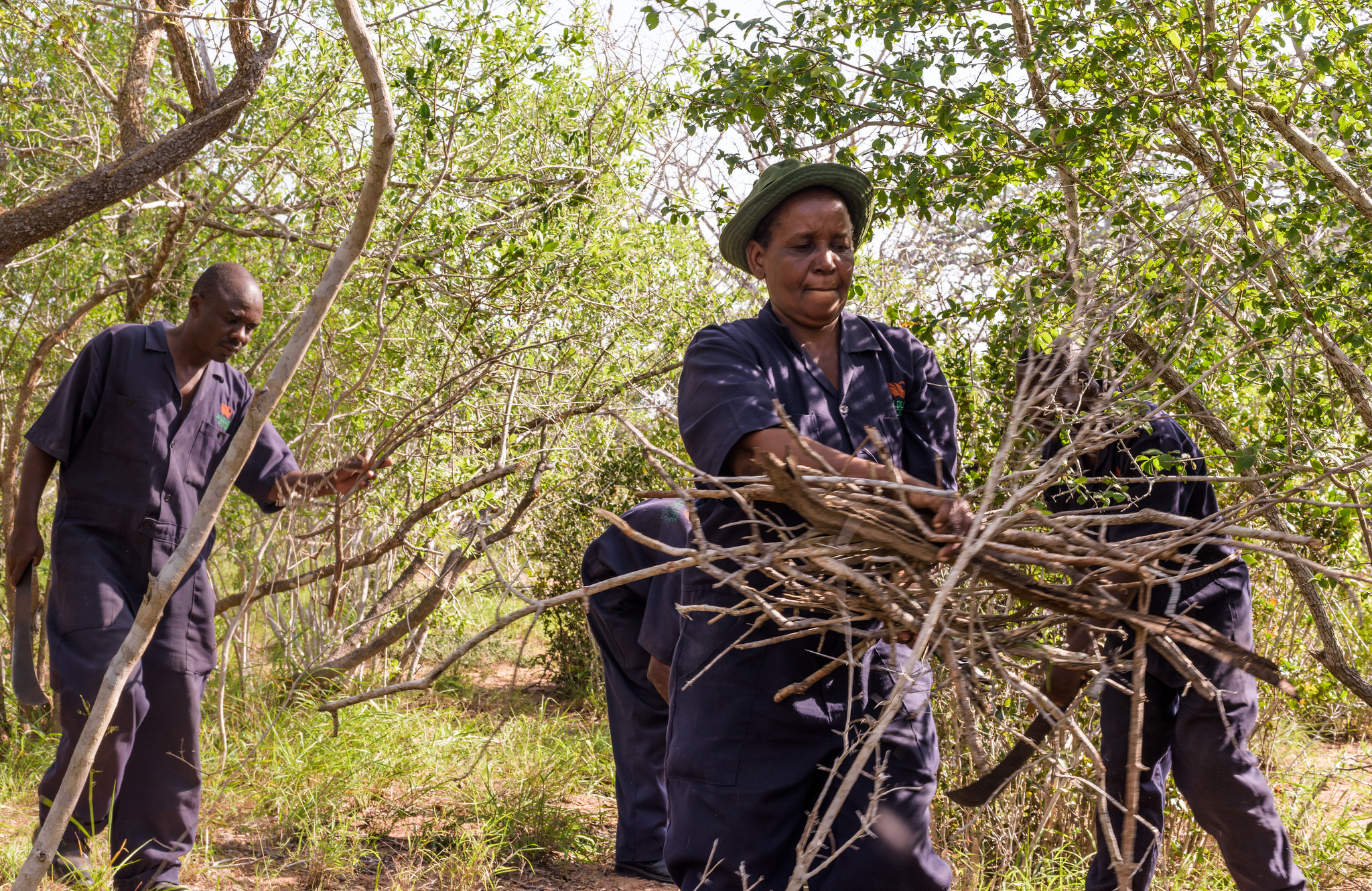 Instead of slash and burn farming and chopping down forests for charcoal production, Wildlife Works offers new alternatives to citizens. These include job opportunities, smarter farming education, and alternative methods of creating charcoal. This latter effort — the creation of eco-charcoal — offers an innovative, yet pragmatic approach to fuel. 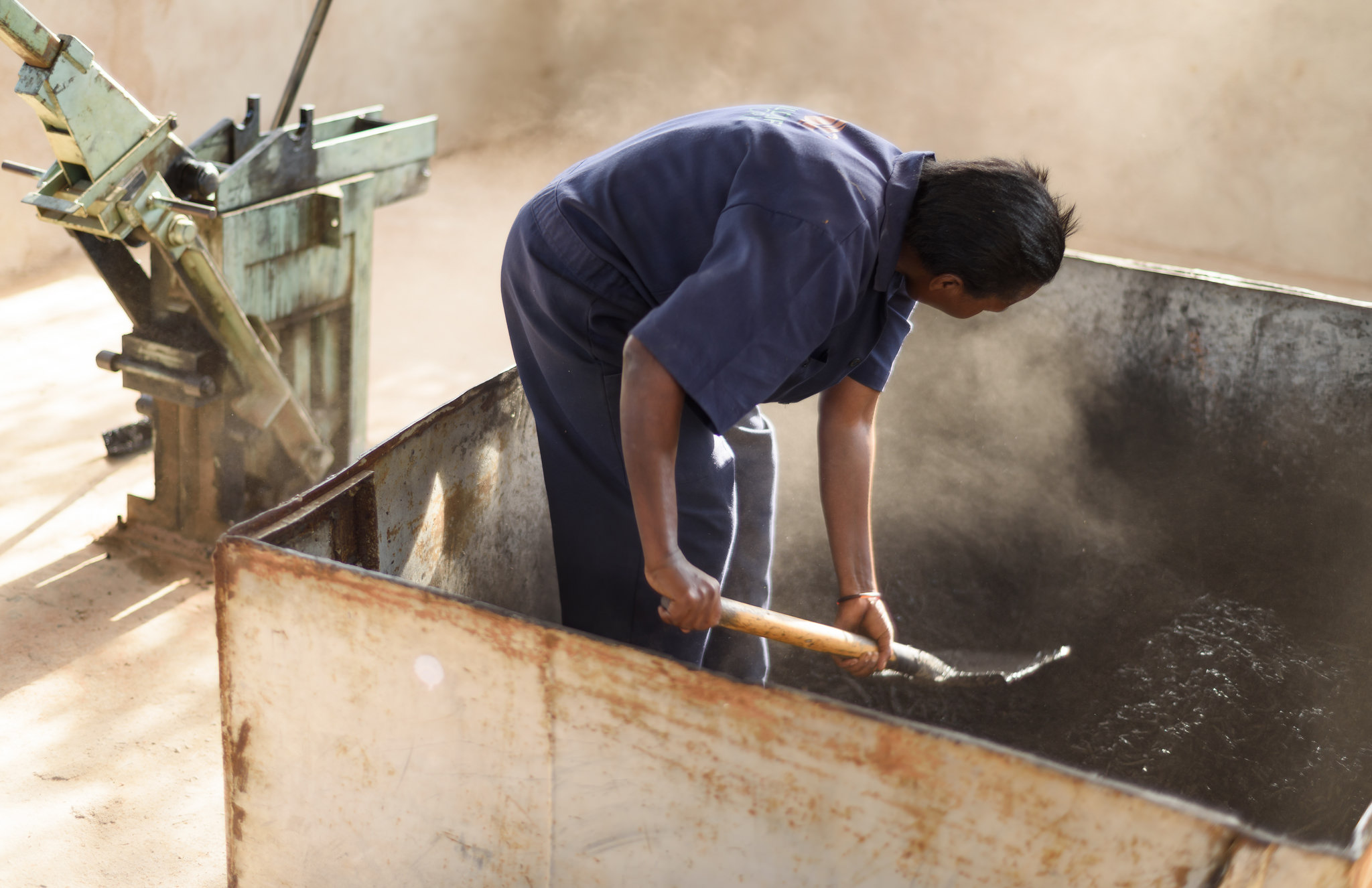 Joseph showed us how the eco-charcoal is created. Teams clip small branches, collect fallen tree limbs, and burn them. The ash is then mixed with a pasty substance, and poured into casts for eco-charcoal bricks. The end result is a brick that burns longer and better than the charcoal most Kenyans make when cutting down trees. 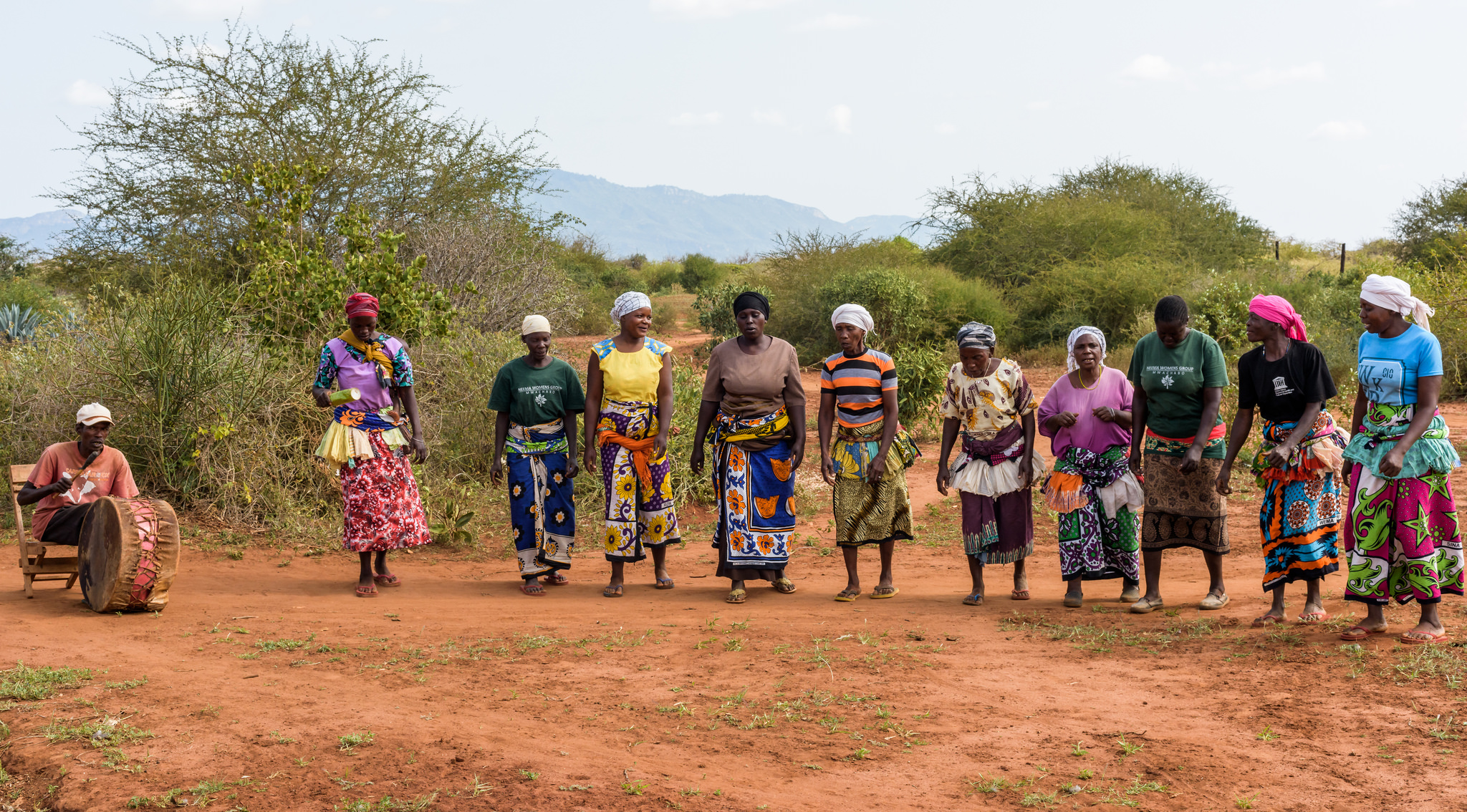 Joseph introduced us to three different women’s groups in the region. The loosely knit associations of women engage in entrepreneurial activities like producing arts and crafts that are sold in the U.S. and Europe through Wildlife Works. In all, there are 26 registered women’s groups in the Corridor, touching 550 women, or four percent of the total population. 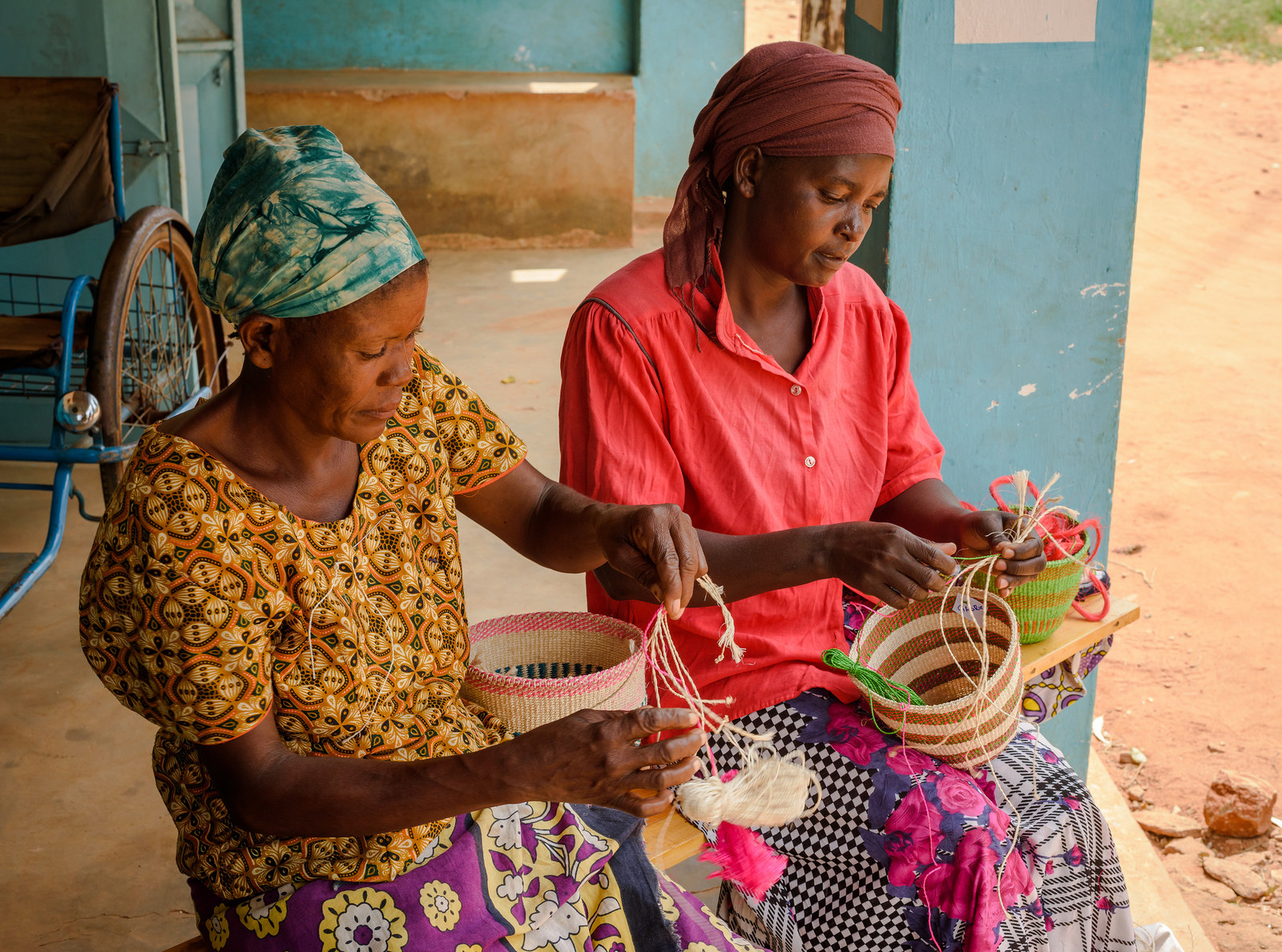 The women use the resulting money to build clean water tanks, buy solar lights and clean cook stoves for their households, and provide an education for their children. Husbands see the positive impact on their households and are encouraging their wives’ newfound roles in the Kasigau community. 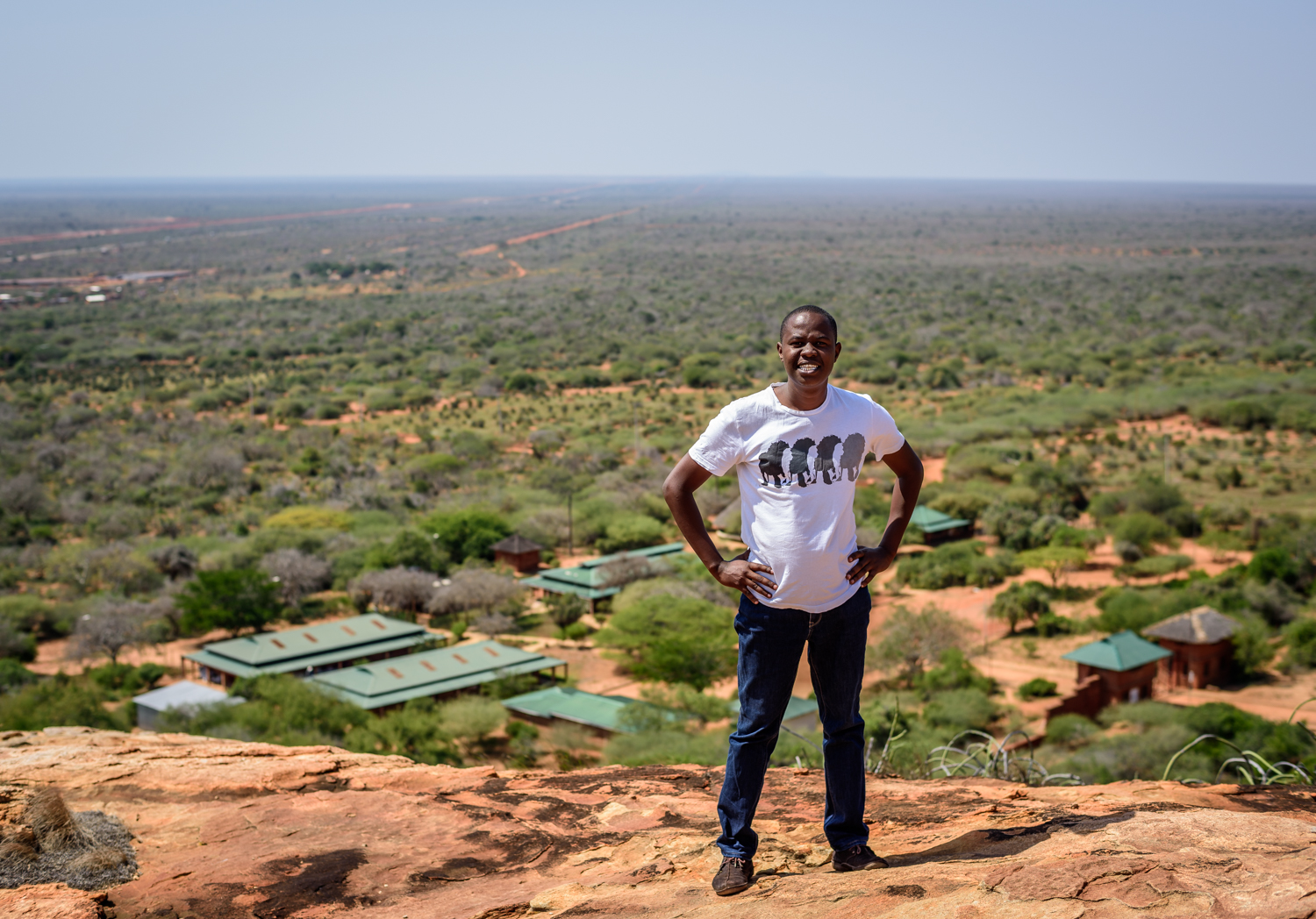 These are just some of the programs that Joseph supports in the community. Wildlife Works engages in other economic development actions such as textile production, better farming practices and more to build a sustainable future for Kasigua Corridor REDD+ Project Area.

This type of community management shows the real-world impact that such a role can have in the right situation. When local people like Joseph interact with the community and serve as a liaison for Wildlife Works, adoption of sustainability programs increases, and ultimately transforms the entire region for the better.

Disclosure: Audi paid for me to visit Africa and capture content as part of a larger documentary that will be released this fall.