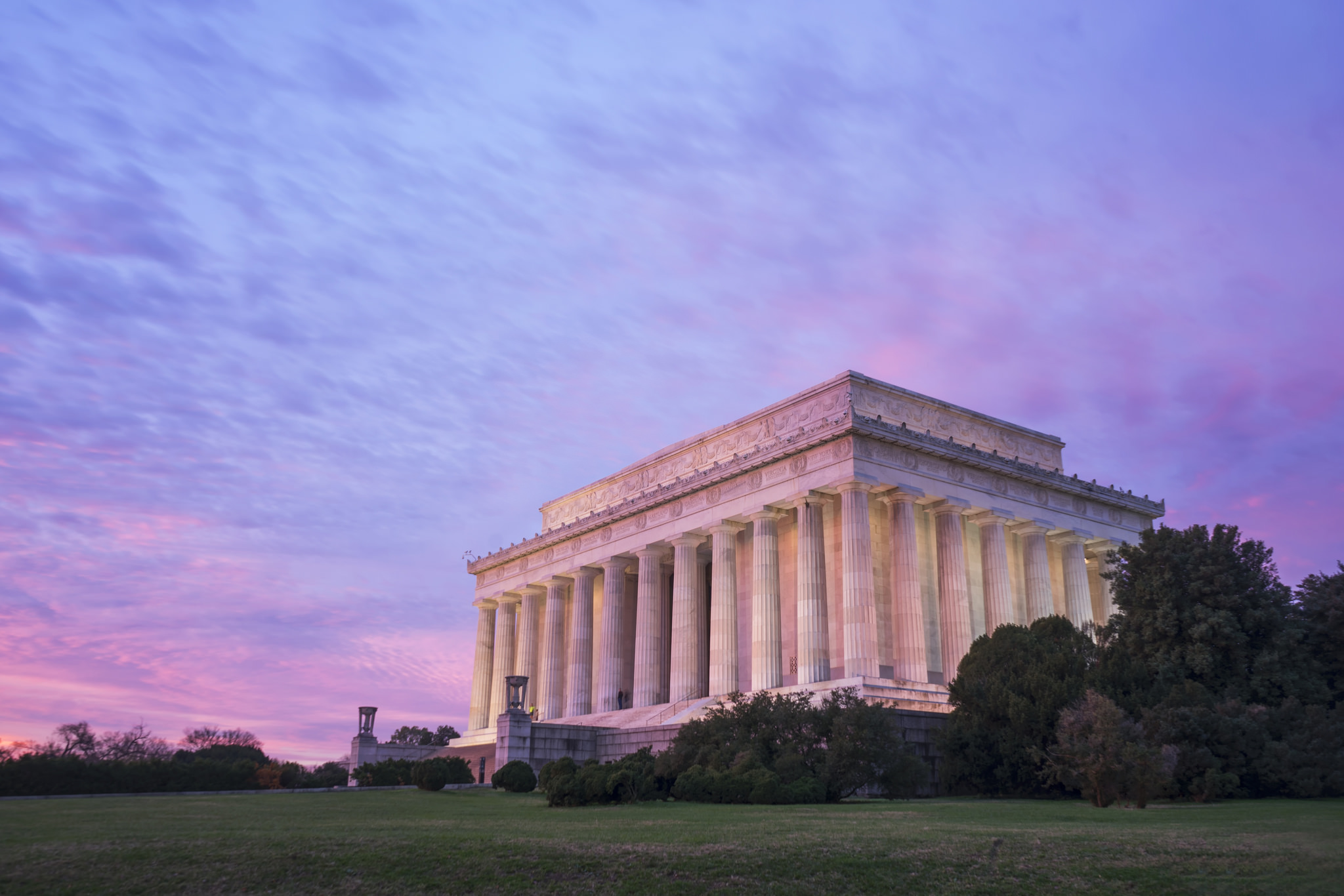 Last week I interviewed Angela Pan in advance of our Photograph the Washington Monuments at Night photo workshop on July 18 (held in conjunction with Focus on the Story). For those of you who don’t know her, Angela is the author of Snap DC: Your Guide to Taking Extraordinary Photos of the National Mall and Beyond…

You can watch our interview with some of Angela’s fantastic photography above. Or you can read the entire interview transcript below (with a pic or three). And do consider attending our Night Monuments photography workshop on July 18, 7:30 until 10:30 p.m. It’s going to be fantastic. 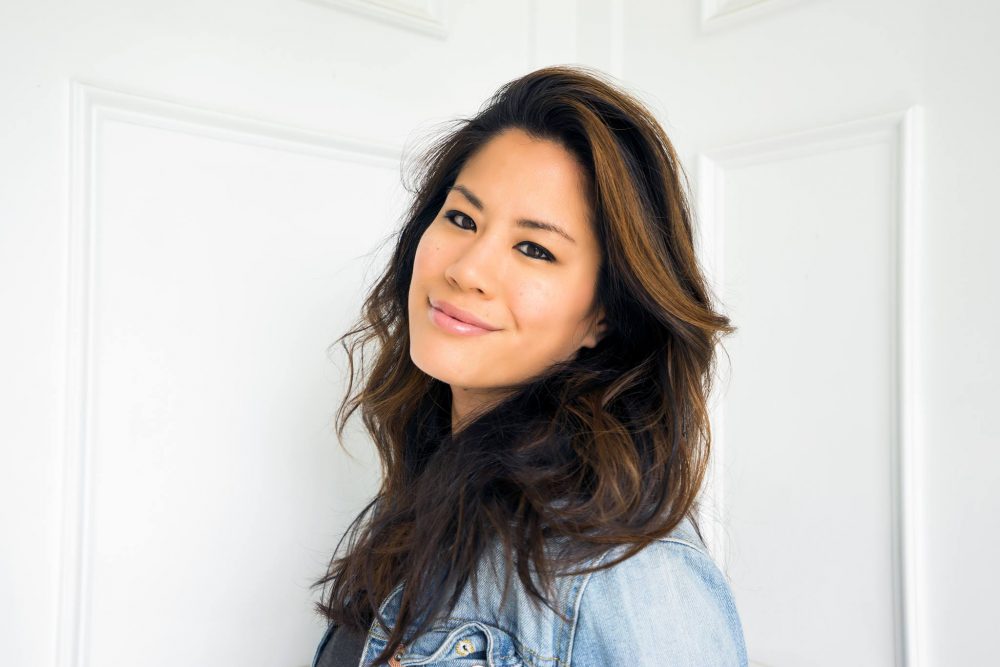 Geoff: We’re doing this workshop together, it’s about the national monuments. And you just put out a book on it, which I’ve got, it’s outstanding. Tell us about your book [Snap DC]. 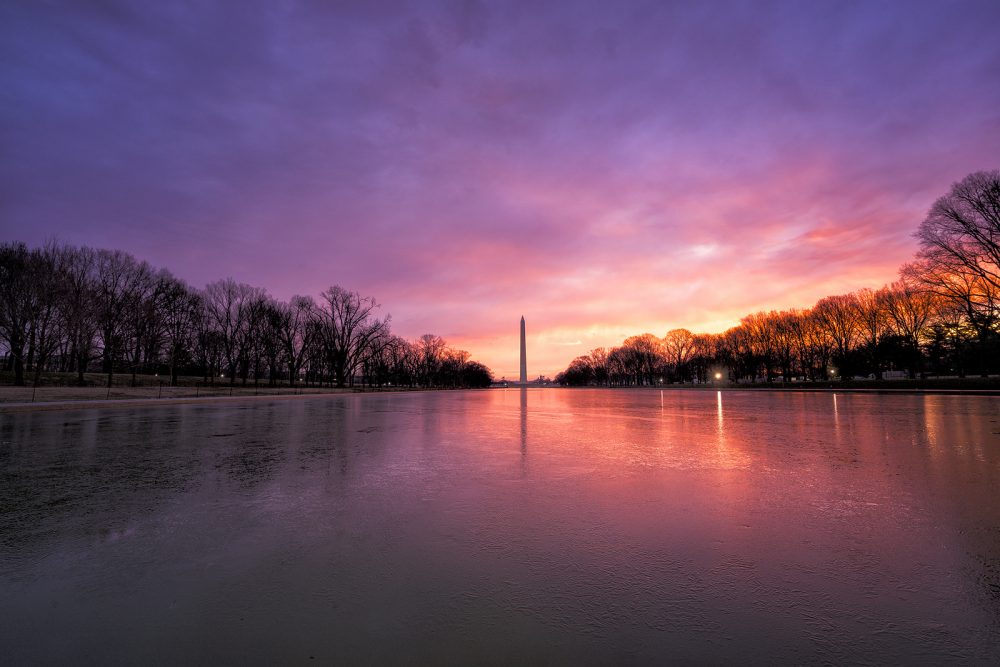 So I just put all of that information I had into a book, and it’s really just to help you photographers, anybody visiting the DC area, to shorten the research time, and get out there and do what we love doing, and that’s photographing landscapes, National Mall, whatever.

Geoff: Very cool. Obviously I’ve done some of that too, and I think most people, when they think of photographing a National Mall, they think Lincoln, and Washington monument, and maybe the Jefferson.

But there are a lot of little monuments down there, and some interesting side views. And I’ve gone on a photo walk, and you’ve shown me a couple of those. What are some of your favorite spots to take folks on when you’re down there, that are kind of off the beaten path?

Angela Pan: I think my favorite spot … First of all, I do really enjoy starting at the Lincoln Memorial, where we went on a photo walk. But I think that’s just a great meeting point, because there’s so many great memorials along the way to walk around the mall.

Like right next to it is the Vietnam Veterans Memorial, and I love it just because of the emotions that it brings for anybody who visits that memorial. But also, the reflections are so great, the line is so great. 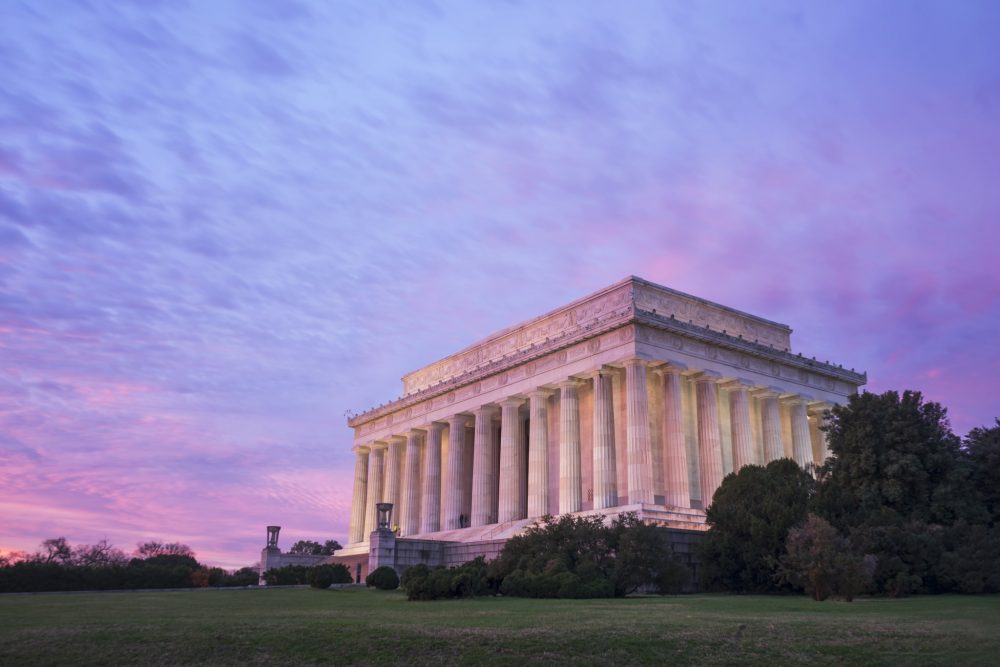 My favorite kind of shoot anytime is sunrise, so when you’re there, you’re all by yourself, and there’s really no other time of day where you’re going to get that. And it’s just such a peaceful, calming experience. You feel so grateful for all the names that are up on the wall.

Even if you go down a little bit further, Constitution Gardens, which not a lot of people know about either, and it’s a great place just to sit, hang out. It’s my favorite time to go in the wall, because all the trees are changing and all the leaves are falling, and it’s perfect. And not a lot of people are there any time of the day. So, those two I would say, are my favorite that are in the National Mall.

Geoff: What do you think of the Korean War Memorial? That’s actually one of my favorite night shots, only because it’s so spooky, you know, with those guys going through the walk, right?

Angela Pan: Yeah, yeah. It’s not in my book, just because of copyright reasons, but the Korean War Memorial was really cool.

I think that memorial in particular is great in different environments, like when it’s snowing and you see all the snow details, and we see what they’re wearing, and then the helmet that they got. Or when it’s foggy and you can get that atmosphere too. But night time is really cool because it’s lit up, and just it makes it more dramatic, and more impactful the way that you can photograph it.

Geoff: There’s that group of monuments and memorials, and then you jump over to the Tidal Basin, and there are four I think, at least that I can think of, that are over there. There’s obviously Jefferson on the Tidal Basin.

And then you’ve got MLK, and George Mason, obviously FDR. You could probably throw the Washington Monument in there, ’cause you’d get some crazy reflecting views off of not just the main Tidal Basin, but that little pool on the other side of Independence Avenue. What are your thoughts of the Tidal Basin? 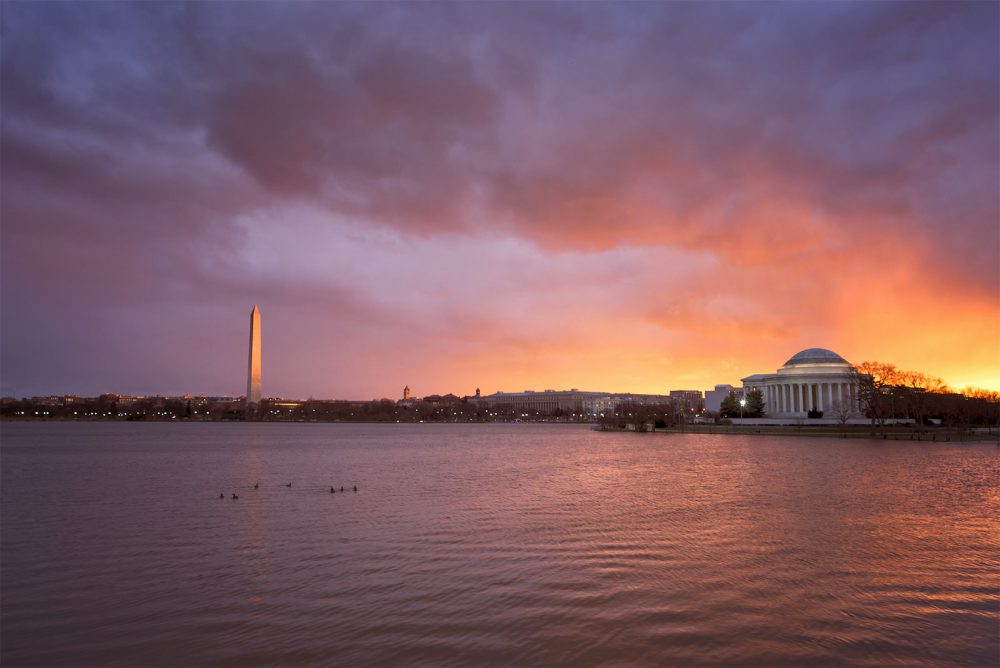 Angela: Oh, it’s one of my favorites. I love it. Especially during cherry blossom season. I feel like it’s the default place to go, but not even cherry blossom.

I was just there yesterday photographing the sunrise, and every time you go it’s going to be something different. Unfortunately, yesterday when I went, there was a whole bunch of flooding. And it was really sad to see, but I had some beautiful reflections.

And I feel like for me, myself, just photographing that flooding, and showing people that that’s happening right now, will bring awareness that the National Mall does need help. It doesn’t take care of itself. There are natural elements that will affect it, and this rain that we got over the weekend and the past week cause all this flooding to happen, and need our flood walls to be repaired.

And that’s what the Trust for The National Mall has been doing. I think that just photographing it can bring awareness to the people. But Tidal Basin is beautiful at sunrise, sunset, no matter where you go you’re going to get amazing views.

Geoff: Right. That’s interesting. It’s funny you mention that, ’cause I think of the Jefferson, and how messed up the roof is on the Jefferson, and how they’ve just kind of let that go into disrepair. It looks awful. I’ve lived here for 25 years, and just watching that thing deteriorate over the two decades plus that I’ve been here.

So, when I look at your photos, they’ve definitely got that HDR feel to them. They’ve got a lot of vibrancy, and color, and a lot of texture. So, I was kind of wondering, if you were to give our listeners today any special tips, maybe you could give them one or two. I know it’s kind of hard to open up the cookbook unless you’re Scott Kelby, and you’re making a ton of money off of it. 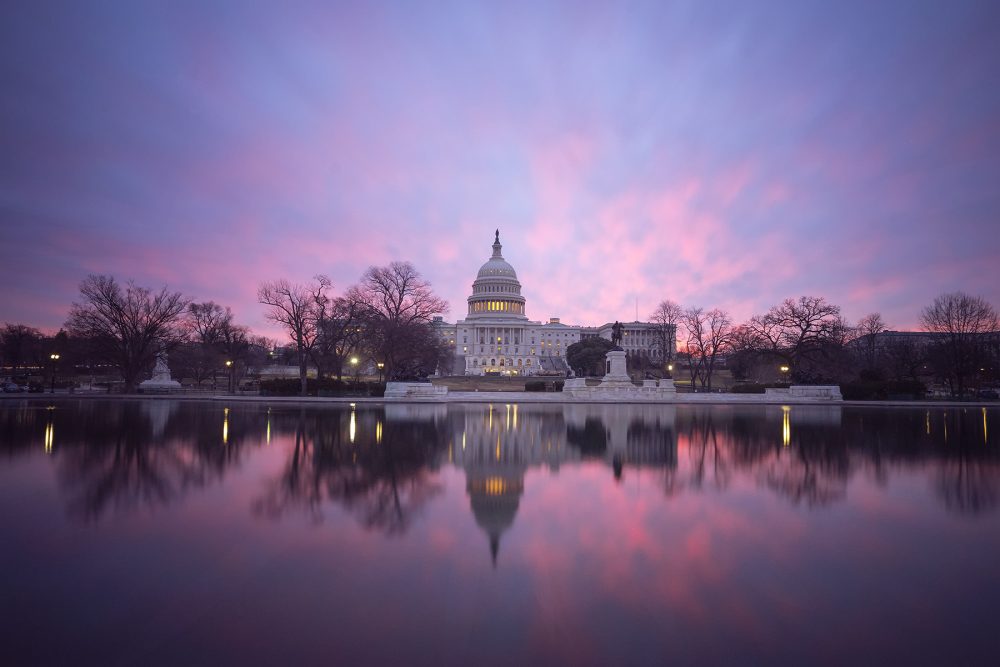 Angela Pan: No, actually I don’t mind at all. I think that my images … I like to shoot sunrise, sunset. You know, the magic hour, that photographers like to call it. I think my biggest secret is that I’m just very consistent. I go out there as much as I can.

When I haven’t been out there in two or three days, I just miss it, and I want to go back. Every day it’s going to be something different, and it really is, for me, just getting out there and being consistent, going out. Pictures of sunrise, even right now, that summer time sunrise is around 5:45 in the morning, so you have to be there 30 minutes earlier.

If I think I had a second piece of advice, it would be just to photograph what makes you happy. I don’t know if that’s too similar of advice, but too generic, or what it is. But just sitting at the edge of the Reflecting Pool, watching the reflections and the clouds pass by in the water.

And just sitting there in peace and watching the ducks float by, I think it’s so much fun, and so interesting every time. So, photograph what makes you happy, consistently, just keep on practicing, and yeah. I think those would be my biggest tips.

If you talk about exposure or photo editing, those are two completely different things.

Geoff: It’s funny, I saw Amy Vitale speak. She’s a Nikon Ambassador. I saw her speak at Nat Geo, I think maybe three or four years ago. And she said the exact same thing you said. In fact, she said it kind of like … About the morning stuff, she said, “If you want to be a real photographer, you have to be up early. See things before the day begins, when people are just starting to stir, that you would never see.” And she says literally some of her best photos are early in the morning.

And I think that’s true, whether you’re a landscape photographer, or street, or documentary. I know some of my best shots are at odd times of the day. And particularly in the morning, if I’m there early I really see some incredible things happen. So, it’s some good advice.

Angela Pan: Yeah. Just that early morning light. Yeah, that early morning light you can’t beat. When I first found out that one out of the two times to shoot any kind of subject is sunrise, I never really used to be a morning person, and when I actually found out, and my husband was telling me, “Oh yeah, you should wake up for sunrise,” I literally cried.

I did not want to wake up that early. I didn’t want to do it. But I just trained my body to wake up now. And even this morning I didn’t wake up at sunrise, I woke up maybe around 5:30, just because I’m so used to it now, you know? It’s crazy how much things have changed.

Geoff: Where can people find your book, my friend?

Angela Pan: You can find the book on amazon.com, just go and search Snap D.C. or you can put my name, Angela B Pan. And my website is abpan.com. I upload a new image on my blog every weekday, and I’ve been doing it for the past eight or nine years, which is crazy. And I haven’t missed a day. And on social media, I’m abpan.com, or I’m sorry, I’m abpanphoto, and you can find me there.

Geoff: Very cool. All right folks, and if you are available on Wednesday night, July 18th, come out and do a fantastic workshop with Angela, myself, and Joe Newman, who runs the Focus on the Story film and photography festival. We’re going to do a great workshop on July 18th, about night photography and the monuments. 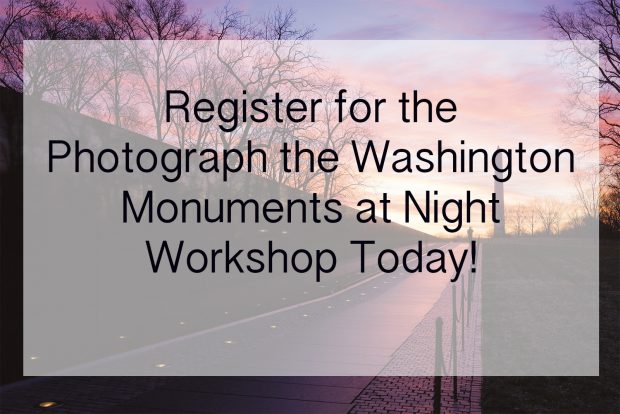 All photos in this article are by Angela Pan.