The Day of the Dead Hits the Streets of Alexandria 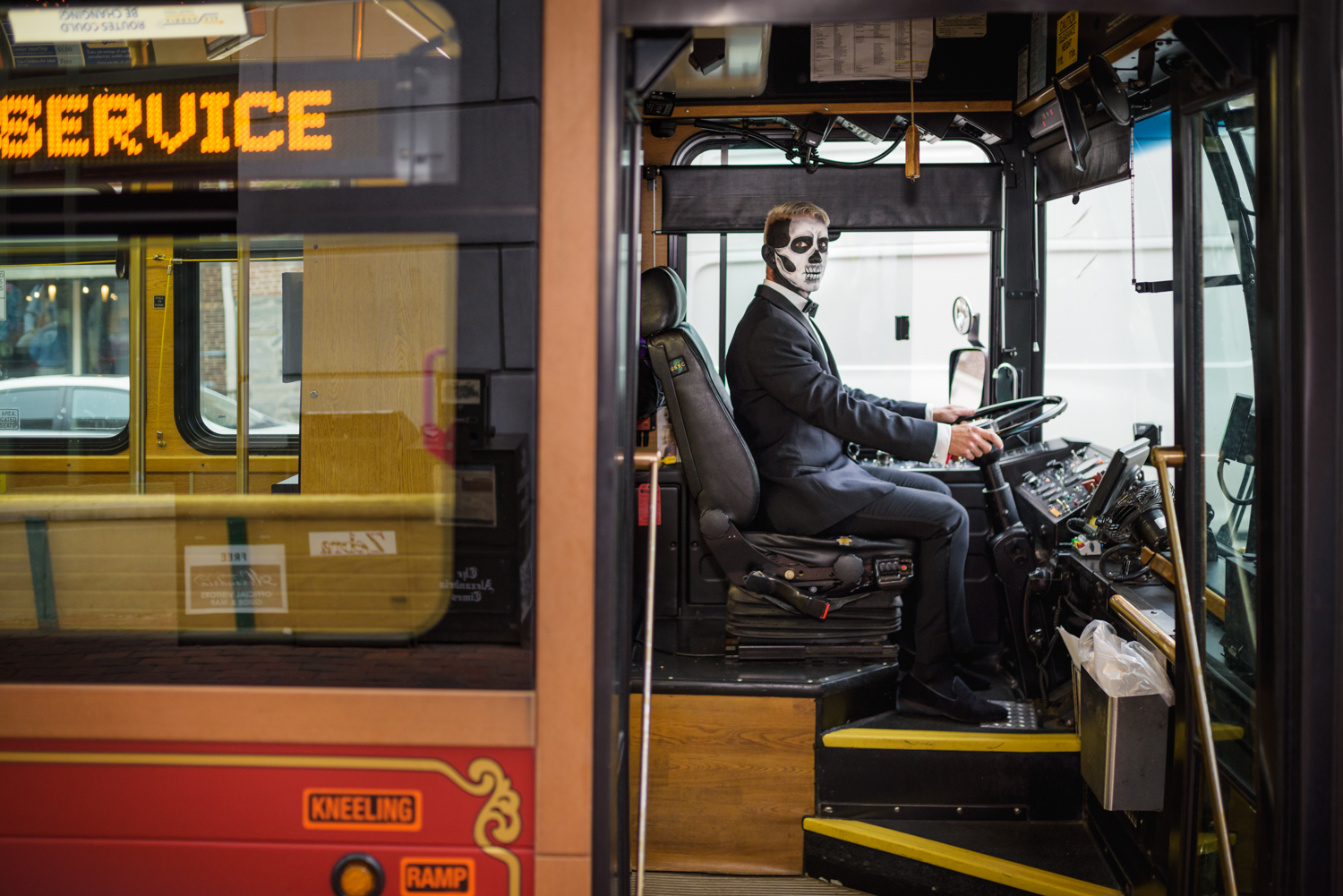 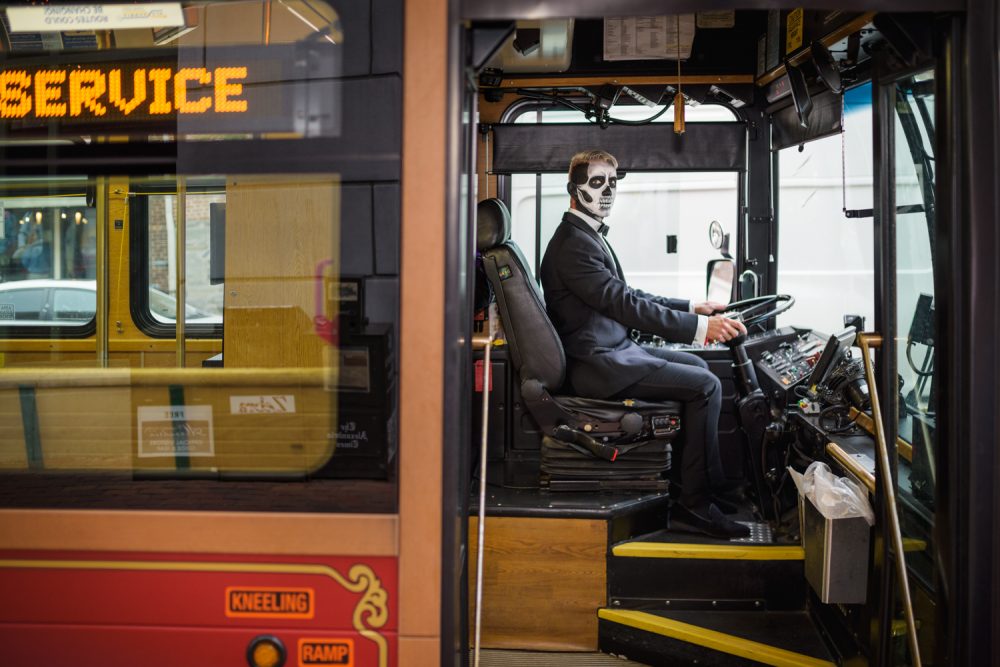 Mom, the bus driver is dead. 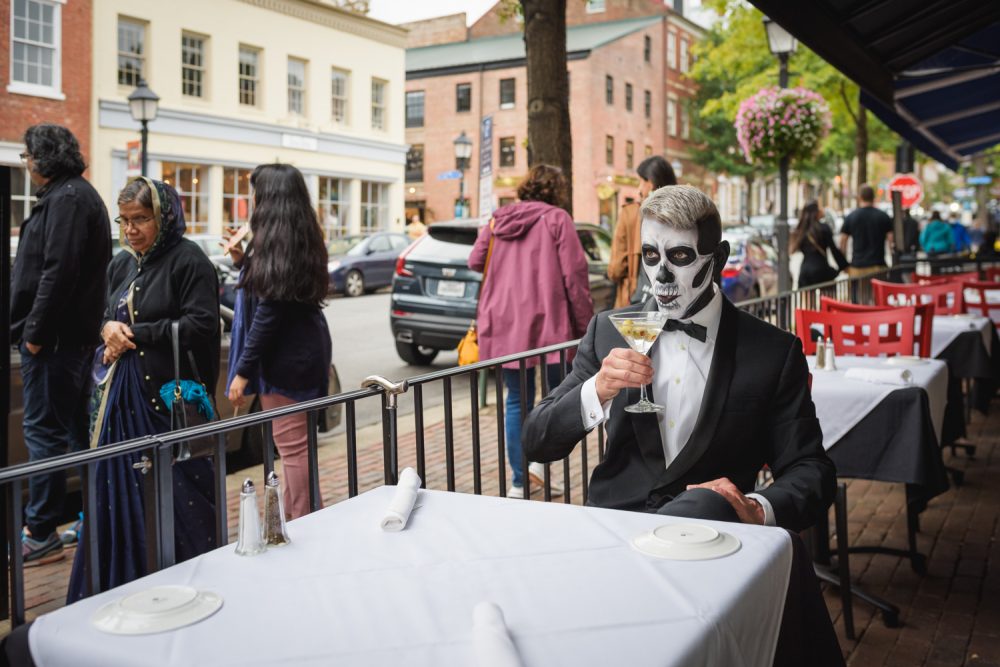 Just a dead guy having a drink.

So I went to Old Town Alexandria with David Miller dressed in a tuxedo with a custom sugar skull great make-up mask provided by Jessie Campbell. 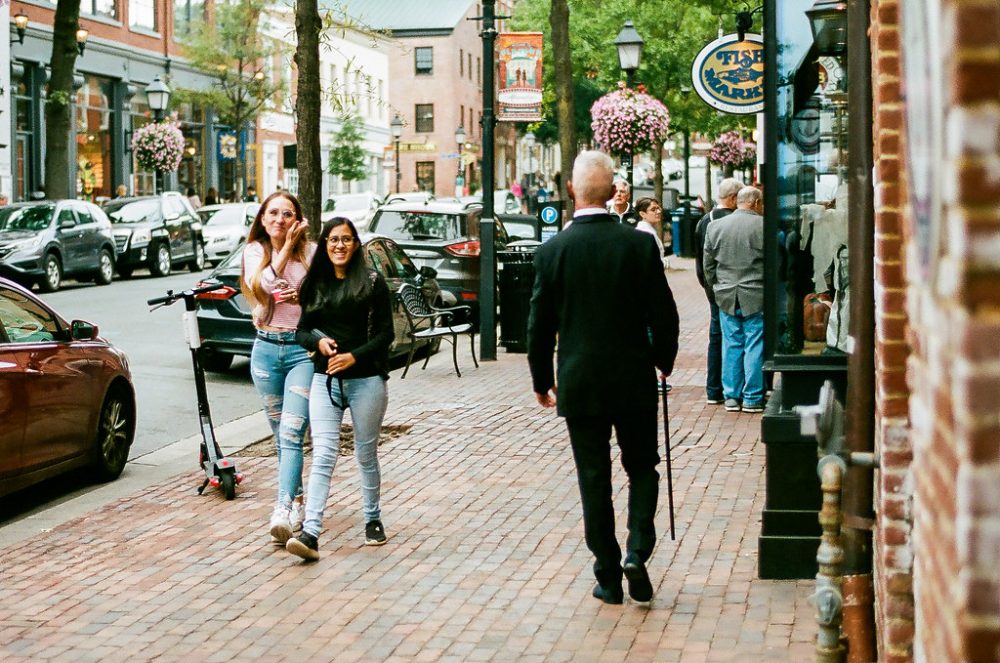 The rest was pretty much street photography at its best. The images, particularly the shots of David interacting with folks, are awesome. People seemed to really enjoy the randomness of a guy walking around in a tux with a sugar skull. 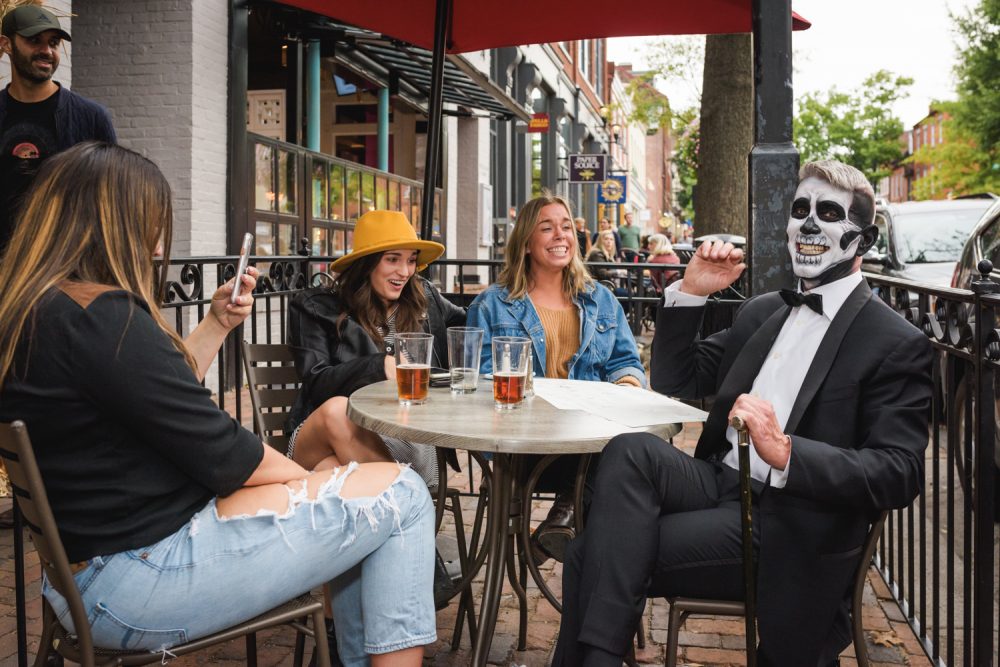 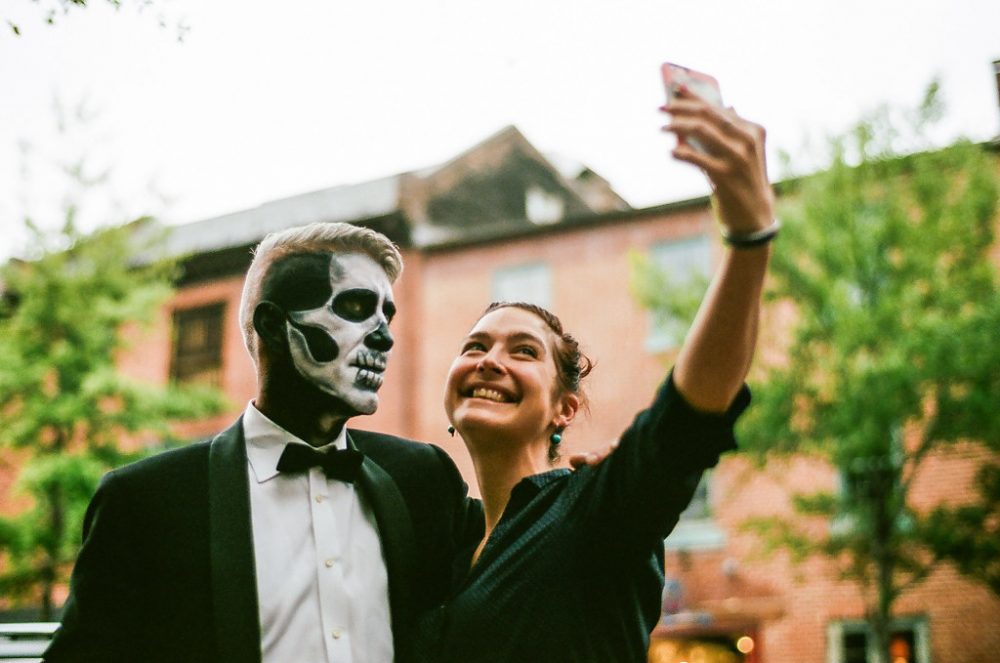 A Day of the Dead selfie (shot on film).

My first real experience with Dia de Muertos was with ace advertising photographer Cade Martin in San Miguel de Allende (read more here). It was such an amazing and captivating experience that every Halloween I think of the Day of the Dead instead. Seeing people having fun with David revived that memory for me. 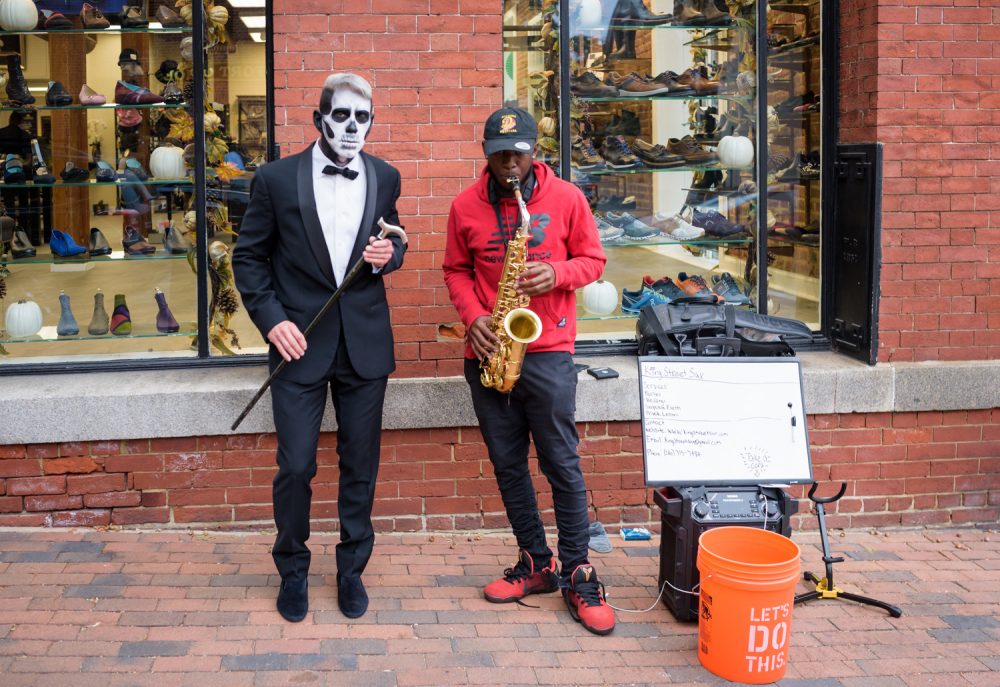 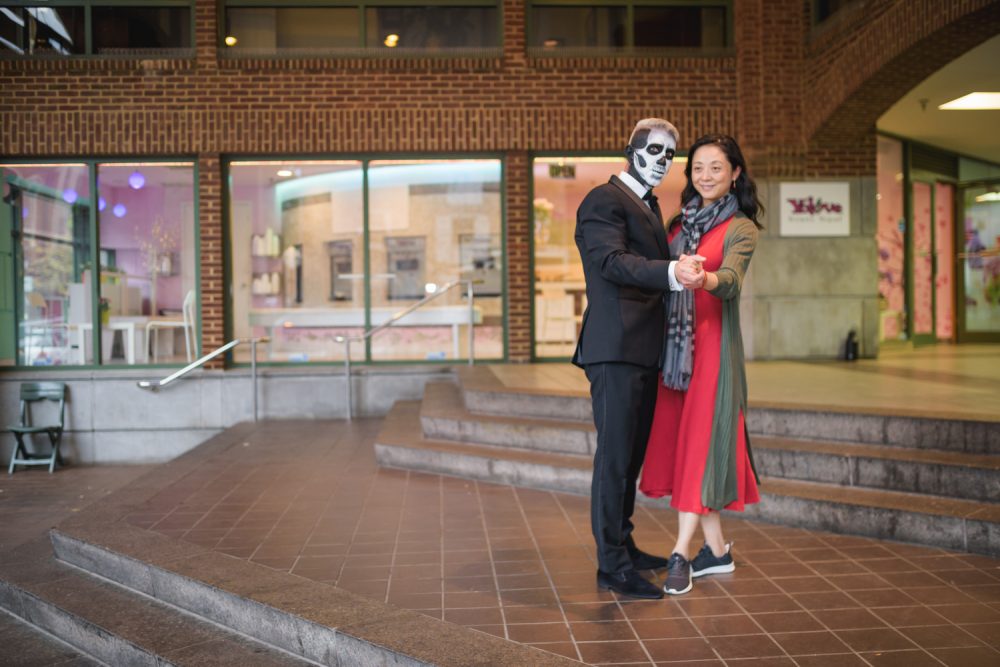 Dancing in the streets. 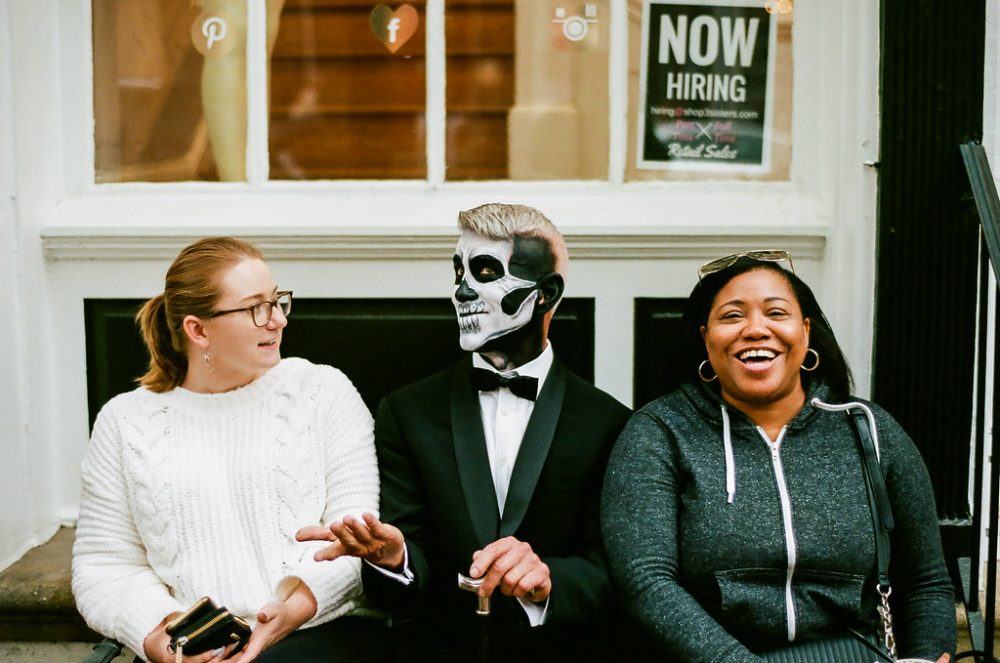 Dia de los Muertos (The Day of the Dead in English)  is an Aztec holiday that celebrates friends and family members who died. It has since become a cultural phenomenon that is now a national holiday in Mexico, and has spawned Day of the Dead celebrations in countries across the globe.  In the past five years, Hollywood embraced the Day of the Dead with movies such as Coco and the last James Bond film, Spectre. 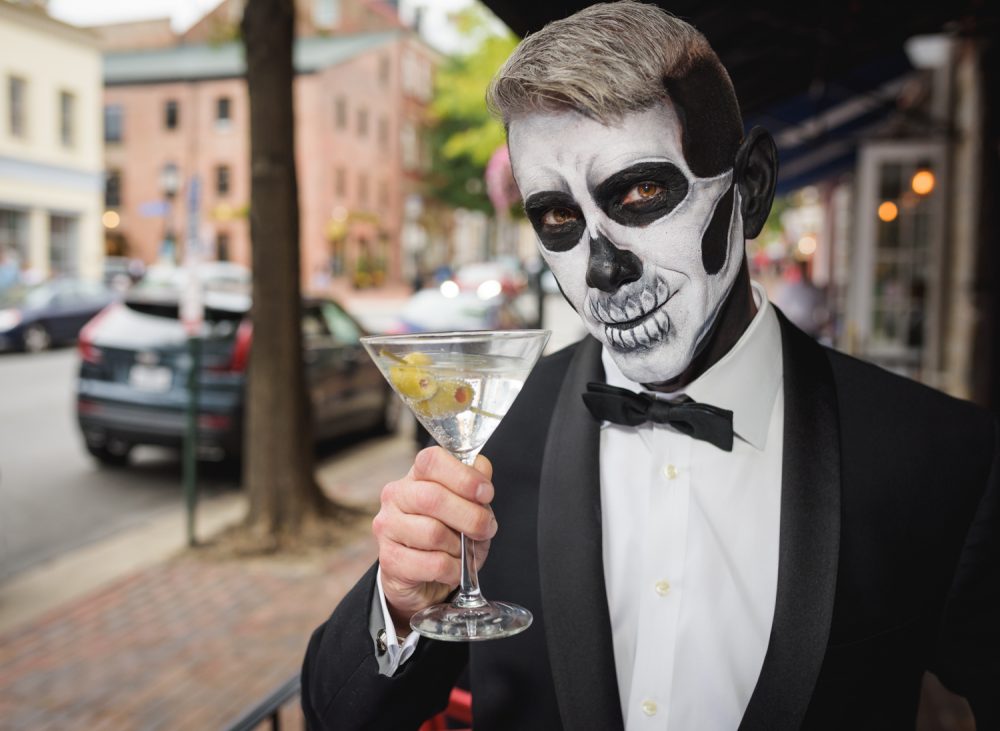 One aspect of the celebration is sharing images and creating tributes with some of the celebrated dead’s favorite foods and items. People who dress up with sugar skull make-up also often wear clothes from an ancestor’s era, such as a classic tuxedo. 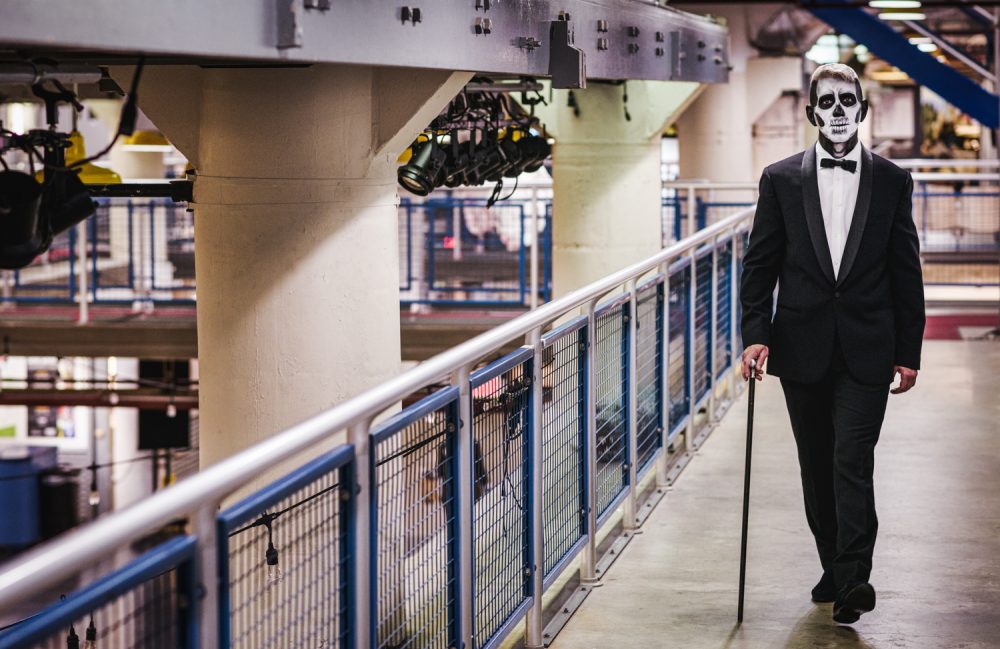 The cane added a certain panache to David’s costume.

David’s look with a classic tuxedo and cane spoke to me of a time from the not too distant past, making it a fitting outfit for the shoot. Sure, some still wear tuxedos, but black-tie events are not anywhere near as prevalent as they used to be. 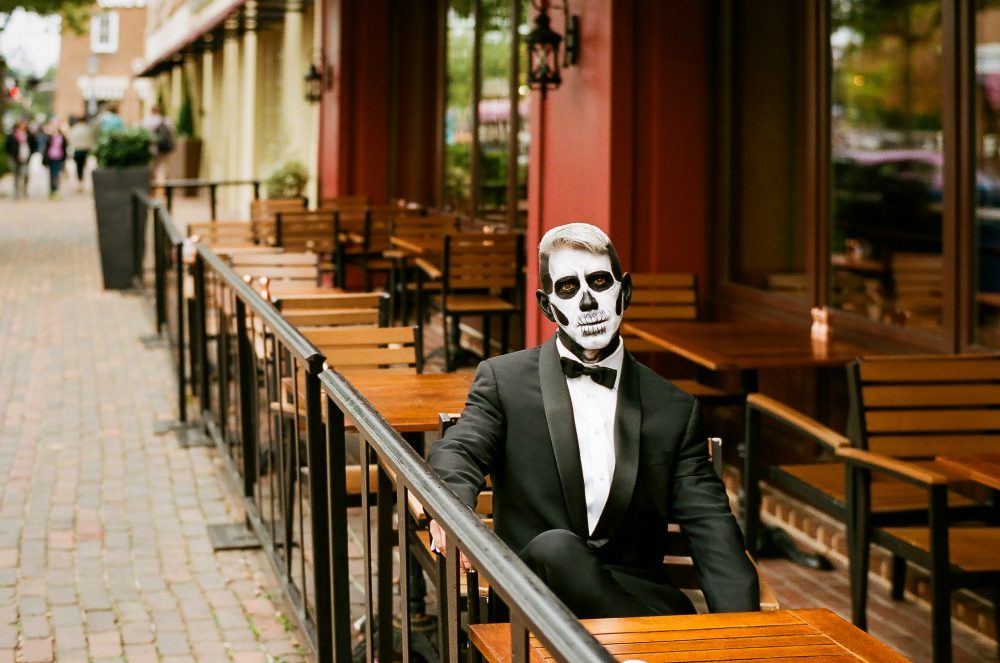 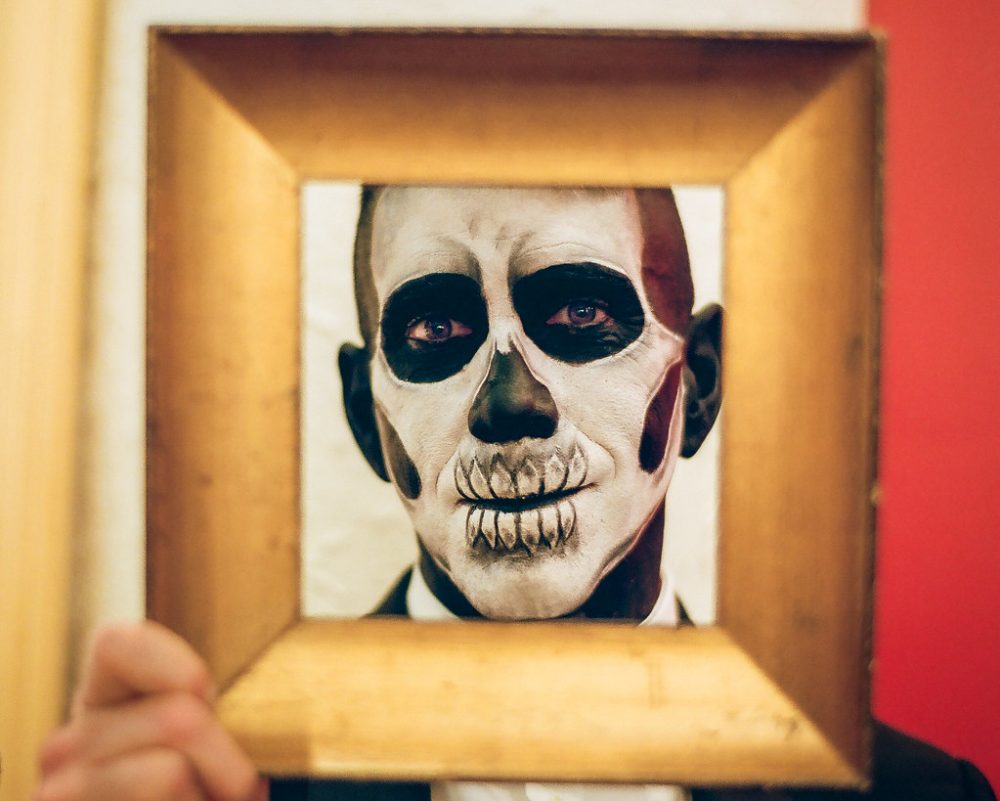 The beautiful art and colors of the Day of the Dead amaze me. One thing I wanted to capture was the artistic nature of Jessie’s make-up work on David’s sugar skull, particularly as it interacted with other works of art. 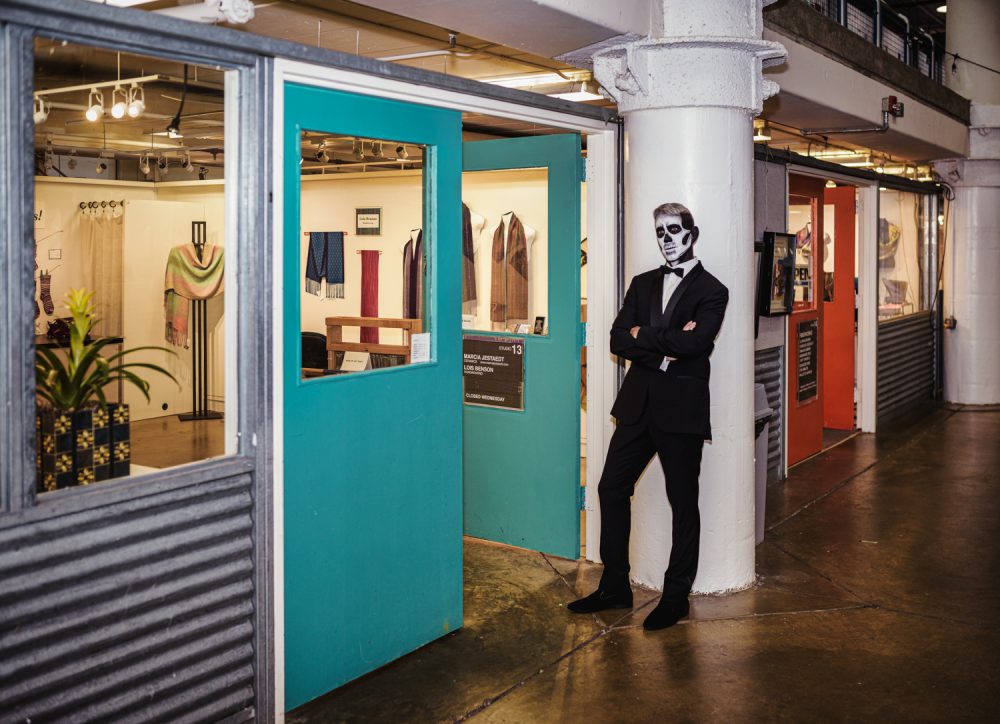 David in the Torpedo Factory.

In addition to the street shots, we also shot at the Torpedo Factory Art Center and in the Mirror Mirror installation in downtown Alexandria. You can see the results in this section. 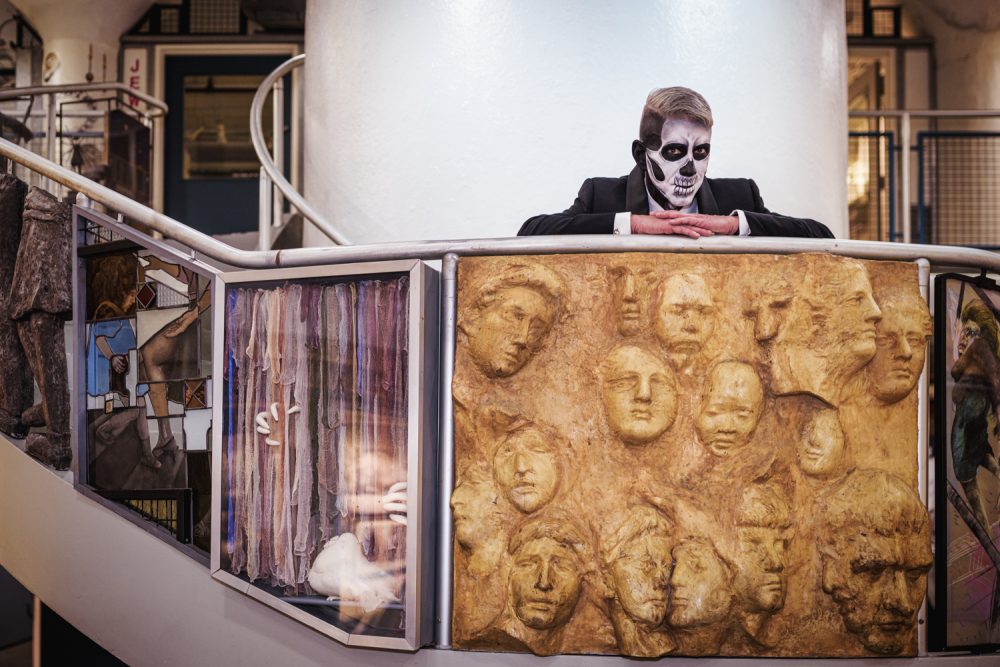 Faces of the past. 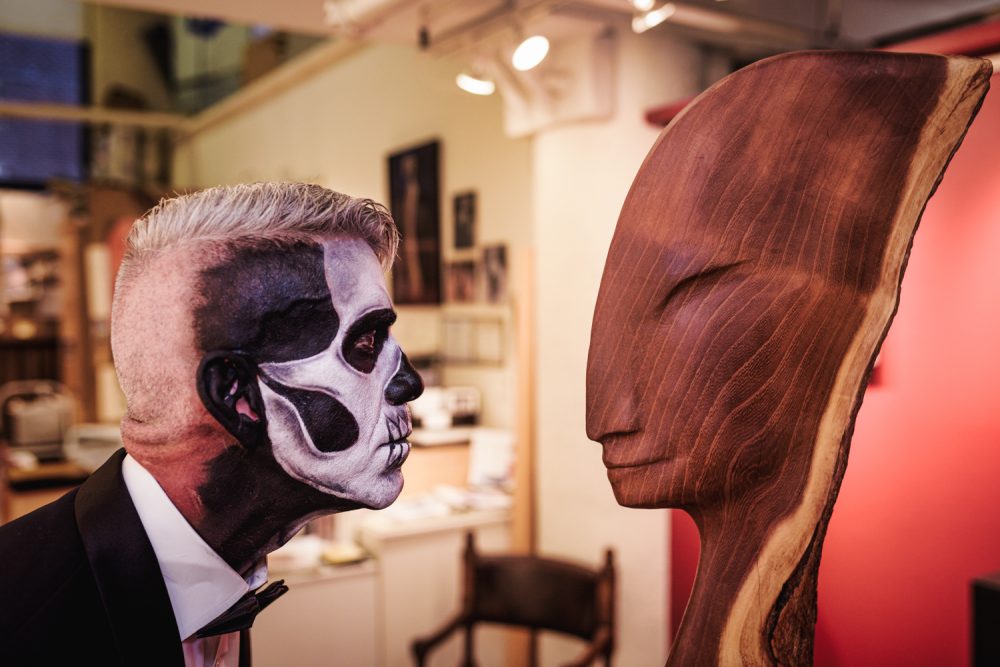 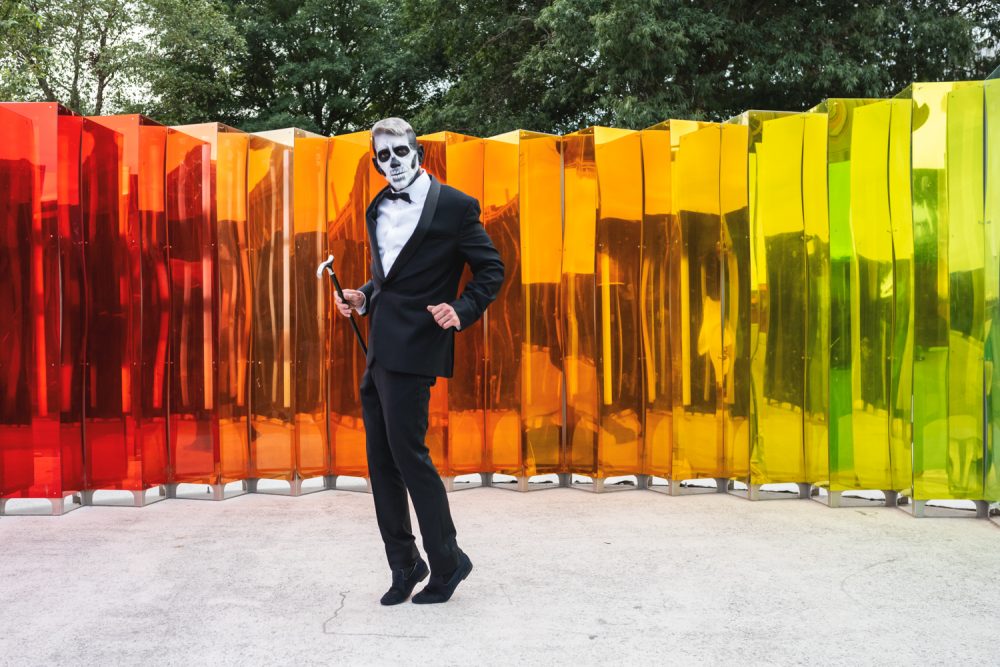 Get your dead groove on. 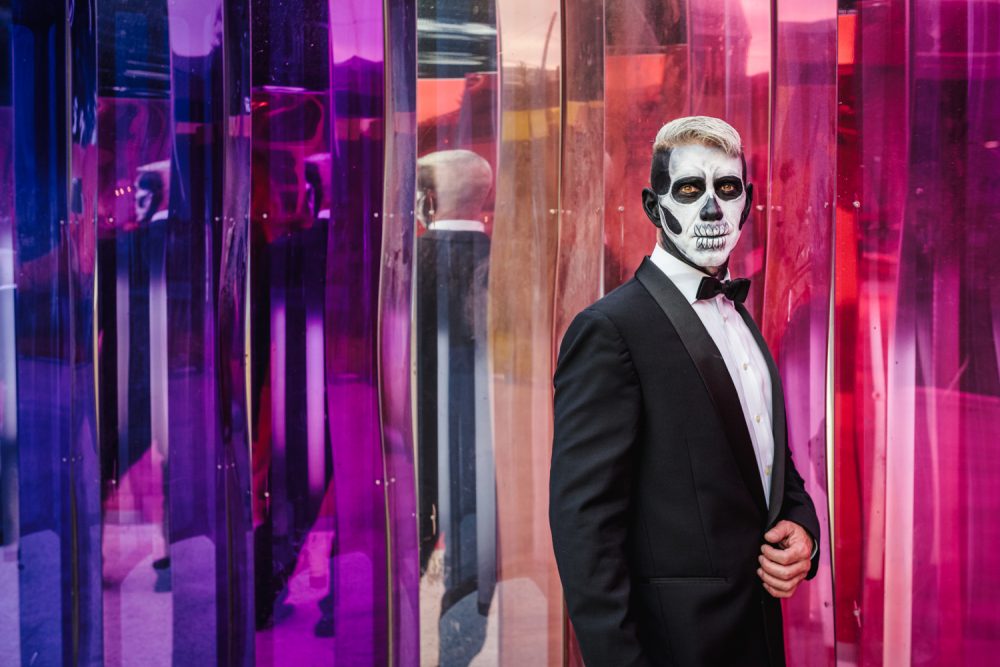 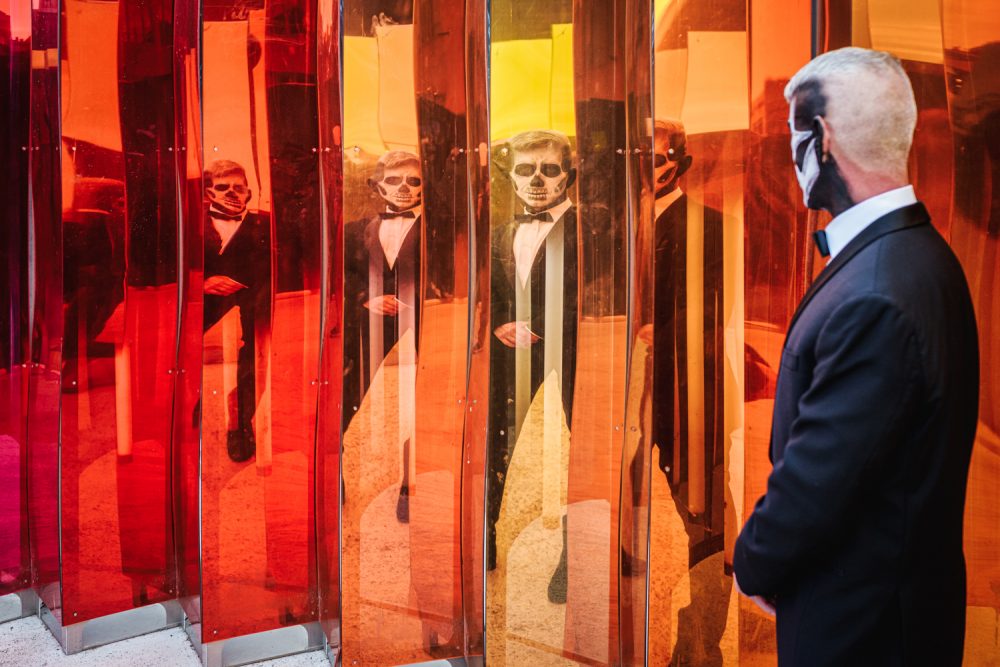 A portrait in the mirror.

Conclusion and Be Safe In the Rain! 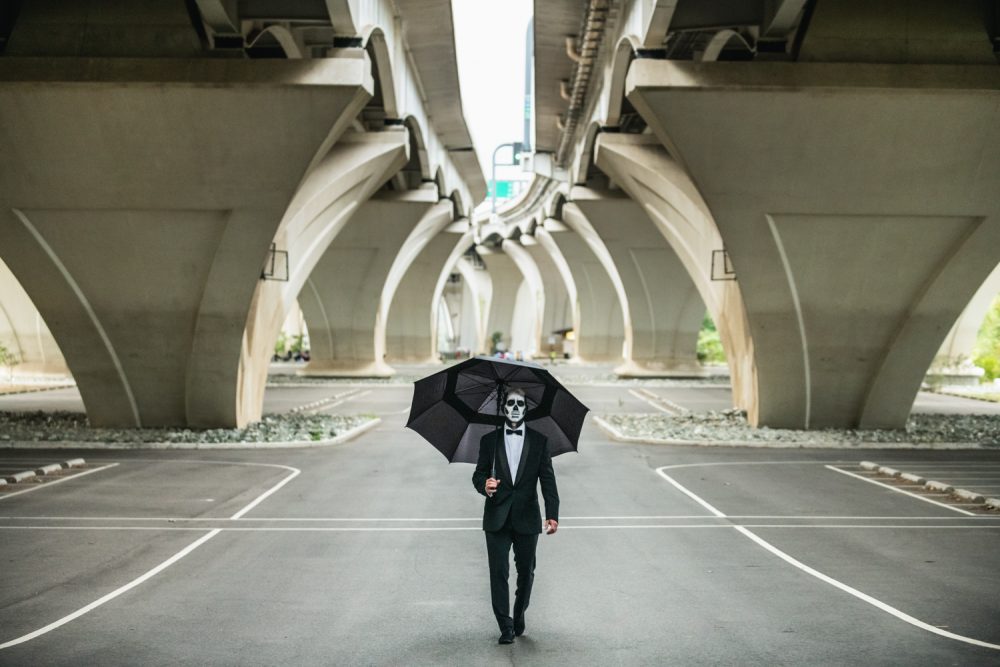 We also went to the Wilson Bridge and shot there with this umbrella.

I hope you enjoyed my Day of the Dead pictorial. Hopefully, I will make it back to Mexico for a celebration again in the near future. But until then, the spirit remains and I celebrate and remember. 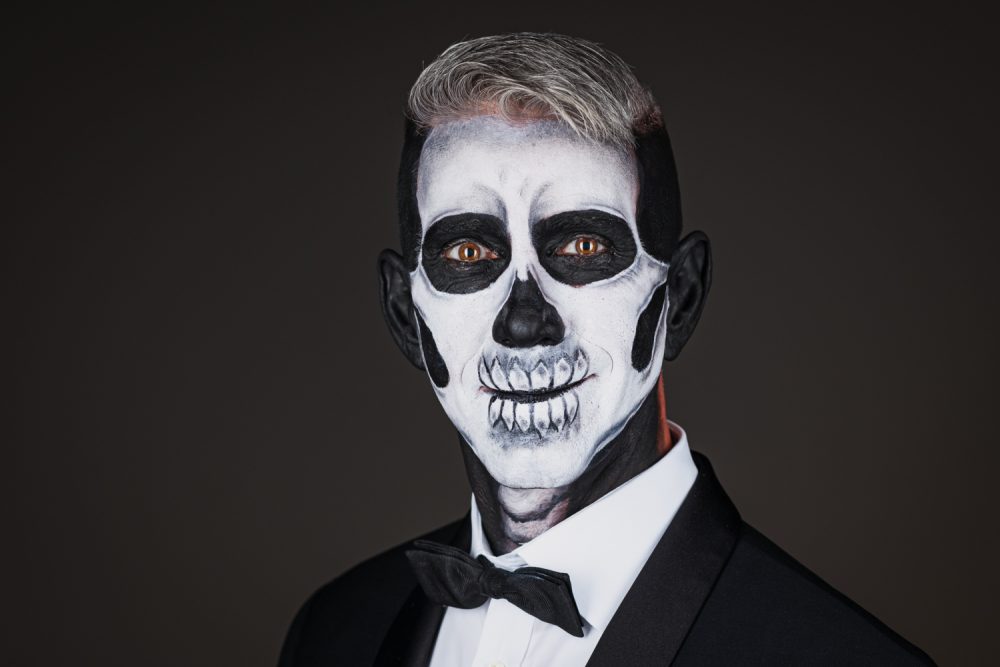 David Miller in his sugar skull by Jessie Campbell.

Stay safe in the rain this Halloween, and cherish the moments with your loved ones, both small and large, alive and in memory.