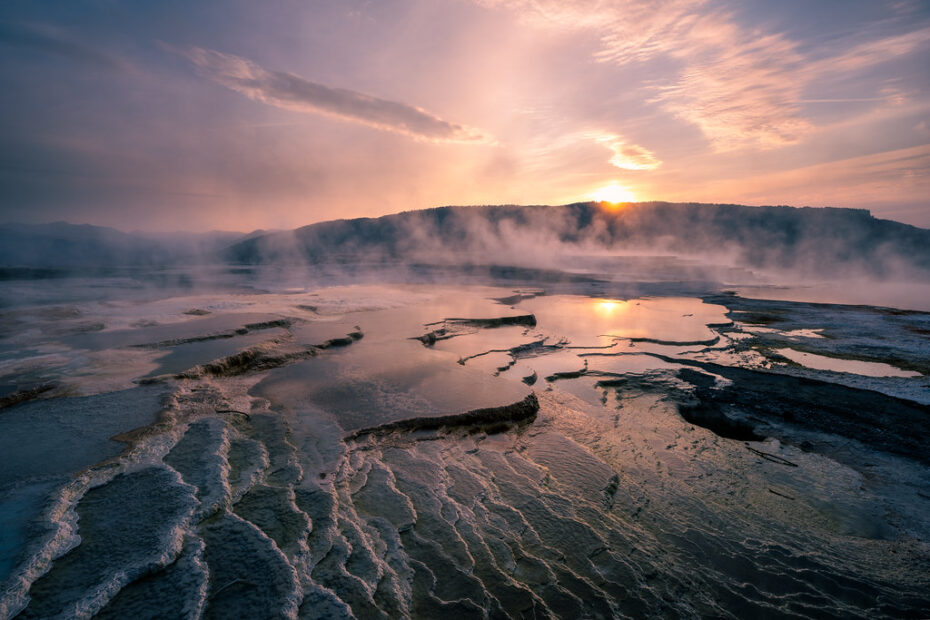 Yellowstone National Park turned 150 years old earlier this week, marking quite a milestone for the world’s oldest National Park. Given the Yellowstone’s continued place as one of America’s favorite destinations, I figured it’s a good time to share some of my favorite photos from my trip last summer.

Bad rainy weather and ecological disaster from last year’s wildfire smoke plagued my trip to Yellowstone National Park. But was I able to capture a few epic landscapes in spite of it all. I have included those below.

However, I think it is a mistake to consider Yellowstone a place of epic landscapes like some other National Parks, for example, the Grand Canyon. But like those other places, there is a geological story, one of a supervolcano. And there is an amazing amount of wildlife in the park, perhaps more accessible than any other National Park I have visited.

So after the landscapes, get ready for some geysers and springs, and some beautiful pictures of some of the local inhabitants in the park.

Yellowstone is really about the incredible geothermal activity of the supervolcano. The incredible geological springs — boiling, fluorescent, and often smelly thanks to the smell of sulfur — inspired awe that I still carry with me today.

The incredible formations are heated by a gigantic magma chamber with motion rock underneath the Yellowstone caldera. This supervolcano is 43 miles by 28 miles, and erupted last 640,000 miles. While it has been more than 10,000 years since the last explosion, geothermal vents are everywhere throughout the park, but most prominently on its western edge.

Strange colored streams and pools steam in the day, geysers explode out of the ground and the smell of sulfur is a frequent aroma. These sites provide quite a site for the geologically curious, casual tourists, and photographers alike.

While I want to photograph the land, I came back with was an insane amount of buffalo shots and some other wildlife shots, too. Yellowstone really offers a North American safari of sorts, with bears, elk, buffalo, wolves, eagles (no shots of those, though) and more.

Most of these photos were shot in the Lamar and Yellowstone River valleys in the park during a couple of rainy days. The herds of buffalo congregate there. While you can spot a buffalo or three by the geysers, they seem to prefer the less noxious air to the East.

According to Wikipedia, the wild bison population reached 60 million in the late 18th century, the species was down to just 541 animals by 1889. Recovery efforts expanded in the mid-20th century, with a resurgence to roughly 31,000 wild bison today. To think we almost killed them off in our expansionist follies.

As you can see, there was a bear in the bush next tour car as well (photographed through the window), and a wolf eating some prey by the side of the road. That and the always present Elk at Mammoth Springs made for quite a bevy of wildlife pics.

In conclusion, you can see Yellowstone is an amazing place. If you haven’t seen it yet, make sure to add Yellowstone to your bucket list. It’s definitely a must-see for everyone.

Happy 150th birthday, Yellowstone. And thank you to Ulysses S. Grant, all the visionaries from that era, and the National Park Service for its continued stewardship. What began as one park became an international trend with nearly 100 countries protecting their most dramatic and amazing environments.