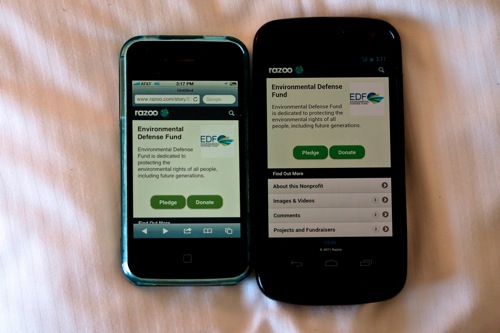 The Third Screen showed that almost every company or organization that goes mobile sees a surge in mobile traffic usually above 10%. This 10% rule was illustrated over and over again with case studies. We launched mobile at the end of 3Q, 2011, and just as the book indicated, the results have been amazing:
Read More »How Razoo Became a Mobile Platform

CForward: There Is No Profit without Nonprofits

This week marked the launch of CForward, a 501c4 — a Political Action Committee (PAC) — committed to better inclusion of nonprofits in political economic agendas. In spite of nonprofits vital role in the nonprofit sector in every community across… Read More »CForward: There Is No Profit without Nonprofits

It’s one of the remotest places on Earth. Yet even Tibet and its mountain resources cannot escape the wrath of climate change wrought by industrialization (Midui Glacier photo by reurinkjan). In one of the most far reaching consequences of China’s… Read More »The Third Polar Cap