The Wind Book is the fourth primary chapter of the Five Rings, following the Ground Book, the Water Book, and the Fire Book. It is the last real lengthy chapter of the Five Rings, with the final “ring” serving as a one page treatise on the “Void”. In the Wind Book, Musashi examines some of the competing samurai schools of his times, and the lessons one can draw from them. Here are five interpretations about how these approaches apply to today’s communications marketplace.

1) Don’t Overfocus on a Tool Set Some other schools have a liking for extra-long swords. From the point of view of my strategy these must be seen as weak schools. This is because they do not appreciate the principle of cutting the enemy by any means. Musashi

It doesn’t matter how you achieve communications objectives, so long as you achieve them. Using one tool set because it’s hot, shiny or comfortable is not the way of a strategist. When considering objectives, a strategist finds the commonality between organization and stakeholder(s), examines budgets, and selects the tools that will achieve the objective with the least amount of unnecessary action and expenditure. Successful efficiency is the sign of a great strategist.

If raising money is a nonprofit’s primary objective, suggesting spending $100,000 on a social fundraising campaign instead of hiring a development director would be a strategic error. charity: water does a great job fundraising, but they also have a development team.

Say one needed to reach moms aged 20-30 in urban and suburban areas. Solely focusing on blogger relations would be a mistake. One needs an integrated outreach that combined advertising, traditional PR, direct marketing and blogger relations. The Gap Magic campaign used blogger relations to market to this demographic, but they also advertised.

If one needed to strengthen word of mouth reputation, relying solely on advertising would be a mistake, you need to engage in two-way social conversations, on and offline backed with substantive action. BP made this mistake trying to clean up its reputation after the oil spill. …if you fix your eyes on details and neglect important things, your spirit will become bewildered, and victory will escape you. Musashi

Ever become distracted in the midst of a communications program? Organizational or personal ideals suddenly come before the effort (though they both seem to work toward the same goal), ankle biting issues arise, individual events happen. All of these seem very important. Perhaps they are, but if one focuses on achieving secondary goals rather than the primary objective, then they become distractions. And distractions detract from one’s ability to attain success. So if an action is obviously going to waste time, don’t do it.

The difficulty comes with knowing whether an activity is worth the investment, or if it is just a distraction. Measurement can be a great aid in determining success with these secondary actions. If they do not contribute to the desired outcome in due time, cut them from your program. To some extent given the speedy evolution of media these days, experimentation is necessary, but long term investment is not necessary. Knowing when to cut a program is part of a strategist’s job.

Last week, Cisco announced that it would cease manufacturing Flip cameras to focus on its core business to business objectives. Flip was a successful brand within the online social media space, but it became a distraction for Cisco and hurt its core business. Obviously, profits weren’t high enough to justify retaining the brand. Cisco’s move to shut down Flip is a great example of making a tough, unpopular decision to achieve an end result. In as much as men’s opinions differ, so there must be differing ideas on the same matter. Thus no one man’s conception is valid for any school. Musashi

We live in a time where people differentiate their skills by declaring the right and wrong way to communicate. The right way can only be determined by a successful outcome, one that achieves objectives while not tarnishing a brand. Everything else is just opinion.

Dell often gets cited as an organization that communicates well within social media forms. Apple is viewed as a company that doesn’t participate in the conversation, and is antisocial. In reality, neither assessment is 100% accurate.

Dell successfully achieves its desired result, and therefore practices A right way. Apple clearly uses bloggers indirectly to maintain interest in its products, and it listens online, too, as demonstrated by responses to prior moments of consumer outrage on the interwebs. Its success as a brand within social media worlds cannot be dismissed. While not offering an orthodox social media conversation, Apple practices A right way. 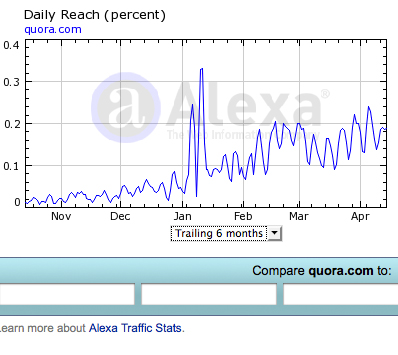 If you try to beat too quickly you will get out of time. Of course, slowness is bad. Really skillful people never get out of time, and are always deliberate, and never appear busy. Musashi.

Expending time and effort in a meaningful, purposeful way is an art. It means knowing when to communicate, and understanding how long it takes to achieve a result. Sometimes this is includes the art of saying no, or at least not yet. Saying no can be very difficult acts for marketers. Turning away a sale or an opportunity can be scary. However, going full speed and “red-lining” a marketing effort can break a brand or an organization.

In many ways, Quora’s hype bubble this past winter is a great example of this. There was too much attention, too quickly for the question-based social network. The service (and its community managers) were not ready for the massive amount of traffic it received. The result was a negative experience for many.

Is Quora done? The above chart shows the social network is recovering from the bubble burst, but it still has not reached the levels of traffic during its peak hype cycle. Rebuilding after a disappointment is a hard road, and it takes time. The more measured approach seems to be working for the company. …it is held in other schools that there are many methods of using the long sword in order to gain the admiration of beginners. This is the selling of the Way. It is a vile spirit in strategy. Musashi

As has been said before, the use of social media to build popularity as a professional communicator is a mindless, elitist approach that hurts the business, and violates the purpose of using these tools. To some extent serving as a public spokesperson may be necessary to achieve a communications goal; however, it is done so as a path to an outcome (for example, attracting clients as a marketer). When personal fame and popularity becomes a primary objective, that communicator sacrifices professional integrity.

Calling oneself a ninja/jedi/synthesizer/[fill in the blank]; creating schema to become an A Lister, telling people that Facebook should not be measured; and, encouraging communicators to build personal brands rather helping their organizations achieve results all represent examples of this transgression. It’s not worth rehashing (or giving links to) individual cases. They are distractions, and in the worst cases, typify the timeless practice of carpetbagging. Be wary of those cultivating endless admiration instead of fulfilling a larger purpose.

This series will conclude with the next and final installment, The Book of the Void.