Interested in winning a copy of Welcome to the Fifth Estate? Then here’s your chance: The five people who best tell how social media has empowered them to make a difference for their business, their community or their family will win a copy of the book.

One of the cores aspects of Welcome to the Fifth Estate is an empowered citizen media that can challenge and circumnavigate traditional media (the Fourth Estate) structures. Businesses and individuals alike can join and develop communities to achieve great things: From social change to blood-loyal user communities. For more discussion on the topic, read Gini Dietrich‘s review of the book.

This is a great chance to get a copy of Welcome to the Fifth Estate. Demand has been outpacing supply to date. To win, simply leave your story in a comment below, and the best stories will be chosen tomorrow morning by the Zoetica team, and based on perceived impact. This is a subjective measure, so leave a great comment! 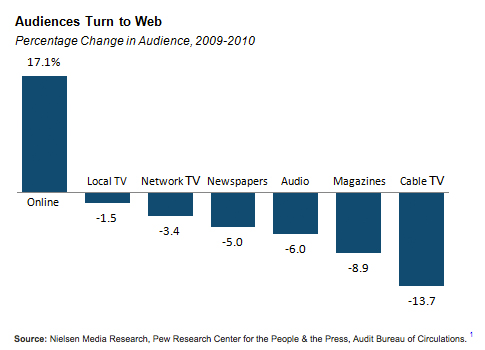 The weak economy and the evolution of Internet media have done more to shake up traditional journalism than any other events in the past 60 years. Online news is now surpassing almost every media form in the United States with the exception of local TV, according to Pew. And in 2010, forty seven percent of Americans read news on their phones! As the traditional print, cable and broadcast media weaken, online content creators, the Fifth Estate as dubbed by Stephen Cooper in 2006 strengthens.

This has not been a pretty evolution to watch. The journalism field has yet to successfully adjust to the new economic realities of shrinking print ad budgets and online media consumption. Perhaps the greatest test of the new economic realities will be the NY Times paywall for their most loyal readers. In the interim, individual voices alone or in aggregate are stepping up to fill the void left by a shrinking Fourth Estate (a centuries old term for the press).

What does this mean for information consumption? So far, it has created a degradation of content with a smaller and increasingly inexperienced journalism corps that attempts to do much more with less resources. Yet several trends indicate the tide may be turning with a focus on creating stronger hybrid journalists and Fifth Estate voices.

Media companies are now investing in new tablet based start-ups and purchasing higher quality social channels like the Huffington Post. Further, next generation trade journals are moving online with the likes of POLITICO now rivaling the Washington Post. While some of these properties are social in nature and feature bloggers, they function more like hybridized journals. Only the best content is featured on the top layers, creating an expectation of quality.

More interesting are the pools of Fifth Estate bloggers and citizen journalists that use a variety of social media tools, including mobile phones, to report from the field. They are filling the void left by reduced journalist staffs. There is no better example than the job that citizen journalists have done in the Middle East, most recently in Benghazi, Libya.

Of course, citizen journalism of this sort creates questions about credibility and information quality. In many ways, the “Twitter (or Facebook) breaking the news first meme” has jumped the shark several times due to inaccuracies. This has in turn validated the need for fact verification and has contributed to a growing decline in peer trust. It seems as the Fifth Estate grows its weak underbelly of opinion and shoddy reporting has been exposed.

Andy Carvin’s well discussed effort highlighting the many brave people protesting and fighting for freedom in the Middle East blends the best of the new and the old. An employee of NPR, Carvin retweets and highlights news bits that trickle out on Twitter via his various sources and hashtag searches. But rather than blindly retweeting information, Carvin sources and triangulates data via his networks to ensure information quality.

In many ways, Carvin shares stories in a timely way while incorporating journalistic questioning. This method is creating a new paradigm for speed and validation. Yet not all people have these kinds of journalism skills.

Creating a wider field of hybrid journalists, or at least spreading the principles of journalism throughout our society via education and training remains the great challenge and key to an increased level of quality information from the Fifth Estate. Here are several organizations that actively develop citizen journalists:

Additional movements within corporate and nonprofit organizations have internal content producers increasingly called corporate journalists. While objectivity may be compromised from the onset, this career paid Fifth Estate member sheds a new more fact-based light on the term content marketing. And as former journalist and now corporate social media pro Ike Pigott likes to say, the trend provides a welcome return to a deserved salary for information producing skills.

What is clear is that the Fifth Estate is evolving with increased attention focused on quality information. How the media and these new voices evolve together remains to be seen. In the current online world the old and needed journalist mastheads and new roving citizen reporters are intrinsically tied. Watching them continue to influence and blend into each other will be an unfolding and captivating story.

What do you think of citizen journalism/media and its evolution?

Today’s oped in the Washington Post by former Nightline Chief Ted Koppel declares the Death of Real News. Prompted by FOX and MSNBC’s clear political views, this piece declares something many have come to know: Our society has lost any resemblance of integrity in its news with very few exceptions. But given who said it — a hard newsman, an elder statesmen of the Golden Era of journalism — it is my feeling that the article will be remembered as a piece that marked a point in time that saw the end of uniform factual journalism across traditional media.

While there are holdouts — PBS, NPR, arguably the New York Times, to some extent the Wall Street Journal, and maybe CNN (at times) — news outlets have lost their soul, their revenue, and real hard journalists. Produced/printed with smaller budgets, younger and less experienced staff, and a hard target towards carving out niche clientele, news outlets opine more than produce facts these days.

“Truth” is not grounded as we have found out over an over again. The noble Fourth Estate has fallen far. “Daniel Patrick Moynihan’s oft-quoted observation that ‘everyone is entitled to his own opinion, but not his own facts,’ seems almost quaint in an environment that flaunts opinions as though they were facts,” said Ted Koppel in his piece.

My Dad was managing editor of the Philadelphia Daily News when I grew up. I ran the halls of that newsroom as a tween. He is still a journalist today (not with PNI anymore), and I have watched him fight for his livelihood as the ad margins shrank, staff was dropped like confetti at a championship game, and the papers sold their souls.

In many ways this downfall has created the opportunity for micromedia to fill its place, bloggers if you would. The Fifth Estate keeps media accountable to some extent, and in other cases it has replaced journalistic ventures with outlets like the Huffington Post and Mashable. But in general, the new media is much more subjective, and less reliable. Worse, we are seeing less blogging as compared to the past, and in some cases, a disintegration of hard hitting conversations.

We are back to the 19th century when many town citizens had a printing press. Learning how to discern quality information is the most important skill set of 21st century. Otherwise, we will be caught in our various echo chambers, chasing the popular myths espoused by our social networks (on and offline).

The battle is not over. Both the New York Times and the Washington Post are planning new electronic pay for content models. It may be time for the tide to turn, or at least become stemmed.

What is clear is the downward spiral of factual journalism has descended to the point of no return. The losses will not be recovered, and new media has reached an unprecedented point of power. We could see another era of factual value, but it won’t feature the powerhouse journalist in its traditional iconic image. Fractured media environments are not likely to consolidate. The real journalists that remain will survive on factual differentiation — an unusual offering in the 21st century media environment.

What do you think about Ted Koppel’s proclamation about the death of real news?