Much has been said good and bad about using the first person singular — me, myself and I — in social media and other forms of writing. It’s a voice of free expression or the epitome of narcissism.

So what should an aspiring writer do?

The first person voice provides a narrative view or discussion with the author as a keep participant in the post. The author’s point of view is clearly presented. But because of grammar weaknesses, traditional writing courses still frown upon me, myself and I, and encourage third person pronoun usage.

But then Internet fame happened. Some bloggers took the acclaim seriously, and the “Is” flew more and more liberally. Sharing personal experiences became excessive, and writing became an act of self embellishment.

A backlash has begun. Cries of narcissism and even self loathing of narcissistic behavior have arisen. Studies show that while initially popular, narcissists lose traction in deeper meaningful relationships over time. In that sense, blogging provides the perfect cover for the narcissist. The relationship with readers is shallow, yet the admiration is public and highly visible. So close, yet so far away.

Does that mean the word, “I” is the tip-off, a sign of the self-centered soul? No, not necessarily. The first person singular can be used well, to share personal experiences of value, to highlight what one person did, and how those events turned out. It can even be used to express the opinion of the voice, which can be highly entertaining if they are a bonafide subject matter expert.

Like all things, if one intends to partake, healthy moderation makes it go down easier. Since it’s the Fourth of July, consider the traditional hot dog. How good is a hot dog drowning in mustard? It’s not (of course, some reader will protest). Basting a hot dog with too much mustard spoils the taste of the meat, the roll and other condiments. It’s all mustard and that’s no good.

If one intends to blog first person, it takes a deft hand. Like the hot dog, first person is best done in moderation. It should present a point of view, rather than becoming the center of discussion. Frequency is a big tip off. An average of one I per paragraph or less shows an experience, but an average of one I per sentence is pretty blatant in its self centeredness.

What do you think of the first person singular? 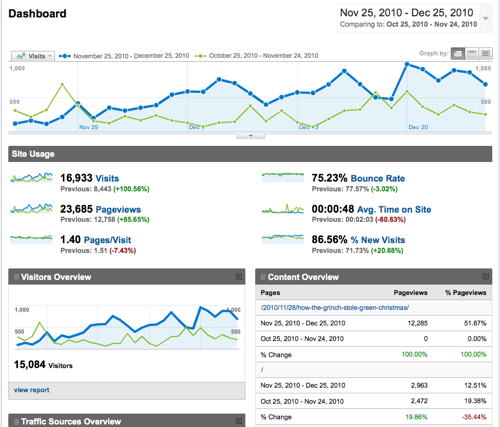 In an effort to increase writing quality, one month ago this blog took on the Me, Myself and I Challenge. The behind the challenge assumes that by eradicating obvious references to blogger narcissism via the words “my, myself and I,” people would find the content on the blog much more interesting. Indeed, the above results overwhelmingly confirm the theory.

Traffic increased by 100%! And it was the first time this personal blog surpassed its predecessor — the professional communications blog, the Buzz Bin — in traffic.

One post went semi-viral — How the Grinch Stole Green Christmas — bringing in a vast majority of the traffic. In addition, overall traffic to main site URL increased by roughly 20%. RSS subscriptions increased by 12%. Retweet and Facebook shares also increased.

At the same time, the additional traffic also brought a dramatic drop in read time (Grinch averaged 1:22) with the a 60% drop in read time. People left quicker, also demonstrated with a slight decrease in page views (7%). However, the bounce rate improved slightly by (3%). Traffic increased, but the type reader also expanded, and the content was less compelling for these new readers. The old quantity versus quality debate could be waged at this point (Metcalfe’s Law).

Overall, removing first person pronouns increased the quality of writing on the site, as evidenced by the generally positive trend of statistics. It also increased from the writer’s perspective.

While slightly more challenging, opinion is still obvious as the author. If one states it, then they must think it. In fact, the tone seemed more authoritative, relying on links and facts to justify opinions rather than conjecture. In context, losing the words me, myself and I were not so hard.

At the same time, it was not easy to stray off topics outside of business and activism. So parenting and personal activity posts were removed because of the Me, Myself and I challenge. While such posts can be written without the first person pronouns, they are not easily done so, perhaps a sign of how personal these matters are. Facebook provided an easy substitute medium for such conversations.

Moving forward, the experiment seems worth continuing. Beyond the traffic, the posts just felt better with the less self-centered tone. And building a blog — whether one for personal purposes or a client’s site — is always a fun challenge. As readers did you enjoy the blog more over the past month?