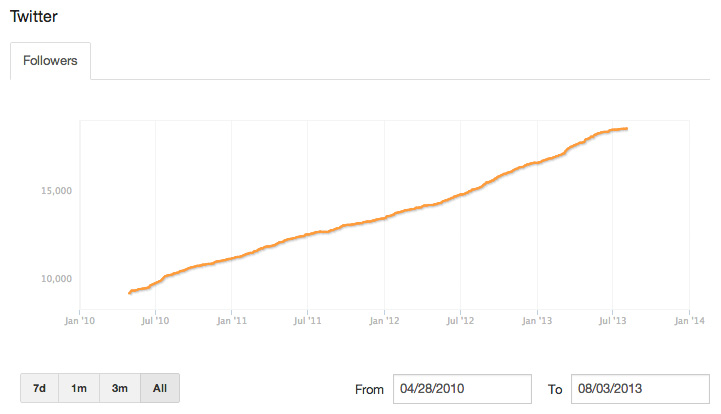 Many people complain about Twitter becoming a stream of links. Now a research report supports their claims, but the surprising reason for the shift is an increase in popularity some users receive, as noted by larger follower counts.

Two professors studied 2500 people on Twitter, and then artificially inflated some of the subject group’s Twitter accounts with new followers. The surprise result?

The newly popular Twitterati found that they couldn’t keep growing their accounts by just sounding off or offering day in the life content. To keep the momentum going they increased frequency posting links and updates, and found that stopped impacting their growth, too.

When that failed, the average follower stopped communicating. They just stopped.

Instead, they started viewing Twitter as a static medium, going in and browsing, and then leaving. Much like one would treat TV. And the posts that are left? Well, those are the links. The study concludes the more links that are on Twitter, the less conversation there will be.

I’ve been on Twitter since March, 2007. While my account never exploded like some of my peers, I have seen relatively consistent growth. Sometimes I have offered more link posts on their to grow my account, and currently, I do less of that (but still some). As you can see by the above chart, that’s never really impacted my growth one way or the other. I never left the Twitter conversation, though.

What causes an account to still grow? The truth? I can only say that I have strived to share useful or fun content, and to be present for others.

Plus, frankly, I enjoy talking with people on Twitter, much more so than Facebook. I know Facebook is more dynamic, but… I think that enjoyment shines through.

However, striking up conversations on Twitter is harder by the month. As the study indicates, the link stream gets thicker. And the genuine @s seem to be dissippating. Recent news from Google has increased the value of good, old fashioned blog links. The dominant search engine has declared war on content farms, effectively wiping out an estimated 11.8% of front page results, primarily those that use black hat SEO tactics such as copying others content. Now more than ever, inbound links are the lifeblood of your content marketing effort.

Links are the currency of the social web, driving word of mouth, third party credibility and earned search engine optimization. The hallmark of the social media revolution — and now the online networked economy — is the referral to someone else’s content. When someone gives your site a positive link, it’s an endorsement of the content. Peer-to-peer recommendations are the foundation of word of mouth credibility. We tend to trust people like us.

While peer trust has declined recently as more people have grown accustomed to social’s strengths and weaknesses, it’s still a critical component of developing earned media impressions and trust. Fostering referrals from other bloggers and content producers through strong editorial strategies and outbound links is the heart of word of mouth development.

Beyond word of mouth value, an editorial recommendation via a link helps increase page rank, a critical component of search algorithms, forming the t backbone of search. You need this for search engine optimization. Without inbound links, Google and other search engines will consider your site irrelevant.

Search engines treat blog links like gold currency because of their frequently updated content. The better ranked the blog, the higher the link quality. Quantity and quality of links drives SEO and blog rankings in a variety of metrics, including indexes like the AdAge Power150, which measures Yahoo! page rank.

And yes, you will receive traffic from inbound links. No, not as much as a real media outlet delivers. This is the long tail of media, but additional traffic is certainly welcome. Who would be foolish enough to complain about more traffic? Consider it gravy on top of the word of mouth and SEO benefits (The Nonprofit Marketing Blog was yesterday’s sixth leading referrer to this blog. Thank you, Katya!) .

So go out, and participate in the generous social web. It’s the best way to earn what you want: Link love.

Do you believe in link love?