The Unified Buddhist Church, commonly known as the Plum Village International Sangha and personified in Zen Master Thich Nhat Hanh, launched a social media presence approximately one year prior to a 2009 U.S. Teaching Tour. Led by Nobel Peace Prize nominee Thich Nhat Hanh, the effort was launched using Twitter and Facebook in an effort to reach a broader, and younger, audience for people interested in mindfulness practice but may not frequent static web pages (see Plum Village photos here).

“The goal was not lofty, but simply to put the voice of Thich Nhat Hanh into the new social media environment,” said the online architect of the effort, Kenley Neufeld, who is a lay practitioner ordained in the Unified Buddhist Church. “I wanted to reach a new, younger, non-Buddhist audience. People who can practice mindfulness. Anyone.”

The effort launched on Facebook and Twitter in 2008. The social media efforts were integrated into our email distribution lists and on the traditional web pages.

The online audience for the Thich Nhat Hanh branded accounts grew in ways that were unexpected, and it grew fast. The initial demographics represented groups not typical of those who came to retreats. Many more young people and also a more equal balance of male and female followers.

“What’s really happened is that a conversation is taking place between audience members,” said Neufeld. “They talk to each other. Discuss. Explore concepts and ideas together. The ‘official’ page can really takes a back seat and allow for the conversation to take place on its own.”

The traditional community wasn’t too keen on the Twitter/Facebook stuff. However, monastics like Facebook because it connects them to their brothers and sisters in the different centers across the globe, so in many ways they are leading the way. This is why we see the online monastery concept happening. We definitely have both voices now – many new people and some longer term practitioners.

The biggest outcome for the Unified Bhuddhist Church and Neufeld was the ability to reach audiences. On the 2009 tour, the Colorado event was the largest retreat on the U.S. tour ever with 900 attendees (see photos from the retreat here), and the dynamic experience spawned a new book, “One Buddha Is Not Enough.” Today, the volunteer effort now has a significant Facebook community with more than 160,000 members.

As a result of these successes, there is a new movement to create an online monastery where people can hear and practice the dharma at a distance. Additional forms of online media are being incorporated into the Church’s efforts. Thich Nhat Hanh has encouraged this and provided the resources (monastics and money) to help make it happen. The group is purchasing computers, cloud servers, and other resources. Two of the other centers in the Order of Interbeing tradition (Deer Park Monastery and European Institute of Applied Buddhism) have created Facebook pages where they are interacting with the audience. Deer Park, in particular, has started an Ask a Dharma Teacher effort though Facebook. For the most recent Southeast Asian Teaching Tour, the Church is livestreaming its efforts. In addition, it continues its Facebook and Twitter initiatives to share live dharma talks by including quotes and key concepts through the social media environment. 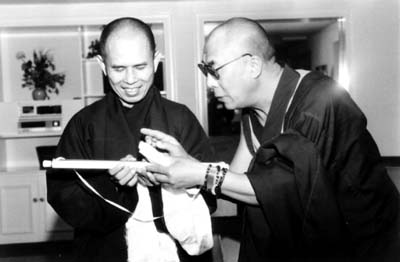 Once in a while you get to meet one of those people you greatly admire in life. Caitlin and I will meet Thich Nhat Hanh, a world reknowned zen master, this Friday in Estes Park, Colorado. He is hosting a retreat dubbed “Awakening Our True Potential – Mindfulness” at the YMCA there.

This retreat comes at the right time for me as I am struggling greatly to overcome some character defects, in particular, shortness of temper, impatience, etc. which seem to be my personal Achilles Heel. I find these defects ground themselves in reacting to the present (and how it either inspires fear and/or reminds me of the past). And before this turns into a self-wallowing post, let me say that I am also very aware of the assets I bring to the table and how they benefit others.

The greatest ways to confront the defects so far are developing enough awareness and presence of mind to pause and respond rather than react. Another critical aspect of this is taking care of myself so I am rested and capable of being pleasantly present for others. Road travel just wrecks me, and often I am unable to respond intelligently after successive trips.

And so as I work on this comes the retreat with one of the people whom I respect the most from a spiritual level. Thich Nhat Hanh wrote the greatest book on love that I have read, and his other works like Going Home: Jesus and Buddha As Brothers and A Guide to Walking Meditation have really helped evolve my spiritual awareness. What will I learn from Hanh and the monks from Plum Village?

I don’t know! LOL, but it’s sure to be enlightening and peaceful. There will be more insights not only on my personal agenda for the trip, but I am sure on other things I am not even considering. Openness and a willingness to explore new things represent the best course. With those attitudes in mind, new tools and insights will surely come. Ultimately, if I can be of better service to others as a result of this trip, I’ll be happy.

And what a beautiful place to have the retreat. We are sure to enjoy some great hikes and photography in Rocky Mountain National Park during our retreat. I’m looking forward to it!