No one likes the idea of being classified as a sycophant. Yet without question there are legions of followers who sing the praises of their favorite online voices without fail, all in hopes of garnering favor and being a part of the in-crowd. Entire businesses and social networks have been built on the back of the die-hard loyalist. This lack of intellectualism provides one of the reasons for an increasing backlash against social networking in the United States.

Who are these people that trust online voices so blindly that they accept anything said as gospel? How did we get to a point where a group of media that was supposed to inspire conversations and thought turned into a mechanism to harness fans? Instead of dialogue, we have “social propaganda” designed to convince the sycophant to buy products, subscribe to questionable services, market their heroes trying to build businesses, and in the worst cases, defend offended parties via the flash mob.

One thing is clear. While democratizing in some ways, social media has also created a means to create blood loyal fans who opt for passion instead of mindful choice. We live in the age of the sycophant.

Perhaps the term is too harsh, and it’s necessary to seek something more palatable. There is another place in life where people blindly support people and things — sports! Nothing typifies this kind of behavior more than the crazed fan who will go to absurd lengths to show team loyalty.

And perhaps the best example of the crazed sports fans are the Philadelphia Eagles Fans, Red Sox Nation, Chicago White Sox fans, Montreal Canadian faithful, English football clubs, and even the rare Dodger fan (as depicted above). Look at Philadelphia, for example. From target practice at Santa’s expense to regular trips to a four cell jail built under Lincoln Financial Field, Eagles fans regularly cross the line and find themselves in questionable acts.

Somewhere there is an off switch that neutralizes rationality, and fuels endorphine driven crazed behavior in support of one’s favorite sports team. It simply defies logic! Yet it’s something that we can all identify with, and perhaps even admire.

What’s different from being a crazed sports fan and a blind follower of your favorite voice online? Not much. In fact, the behavior patterns are very similar in nature. Sycophants are beyond fanatic sports fans. They do unmindful things such as propagating bad ideas, mimicking style rather than developing their own, and flash mobbing others, all to curry favor and feel a part of that favorite voice’s community. 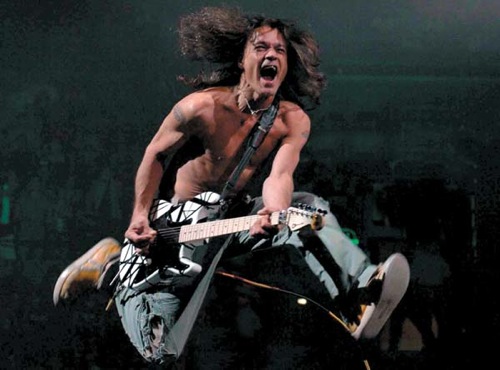 It takes two parties to dance, and fans need a personality to admire. Of course, this is not always a bad relationship where a party abuses his/her fans. Some people treat their fans like gold and view their position as a public trust. They honor their fans, serving them with great content, ideas and other services in exchange for their loyalty. They try to grow with their community.

Then there are the ones who try to capitalize on every single aspect of their blood loyal, crazy fans. From emotional support to financial milking, these “influencers” take everything they can get. Yes, they have a right to try to earn a buck, and yes, it’s fair as a third party to observe this and question the overall value to both parties.

Recently a top Internet voice decided to offer free blog ideas to his followers at $9.97 a month. This is in spite of several free services that do the exact same thing from organizations like WordPress, For Bloggers, by Bloggers and the Daily Meme, as well as free blog topic tips from leading voices like Copyblogger, Sunday nights’ #blogchat and Problogger. These subs support the influencer’s thought leadership with posts that provide links and mentions, as well as providing a little extra pocket change. And what do they get in return? $119.64 less a year to blog about ideas that indirectly support someone else’s market stature, and have no clear path to develop their own blog topics and thinking.

Examples like this content marketing pyramid can be found throughout the social web. Please forgive the second, testosterone-driven meathead analogy of the post, but since these internet voices like to think of themselves in such light, perhaps it’s time to use the dreaded rock star metaphor.

Eddie Van Halen is one of the most commercially successful guitarists ever. His brown style — marked by tapping, intense solos and high frequency feedback — distinguished his sound in an era of blues based rock dominated by Led Zeppelin and later hair metal bands. At the same time, he unleashed a wave of imitation that primarily featured thousands of teenage boys across America playing really bad guitar. His most notable successors are heavy metal guitarists Steve Vai, Joe Satriani and C.C. Deville.

Great guitarists make money, great artists influence other great artists. If you are so fortunate as to have a blood loyal community, don’t be Eddie Van Halen. Encourage the development of others’ thinking and careers. 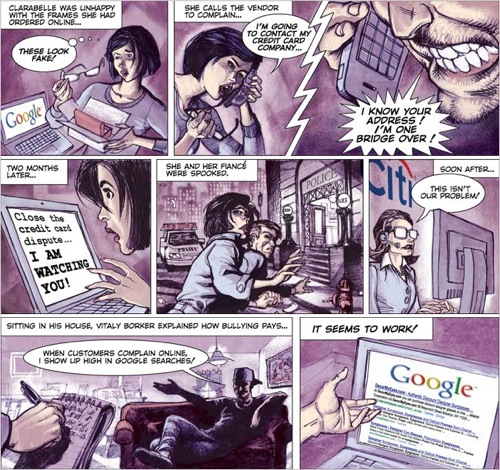 (Cartoon by David G. Klein from the New York Times)

Search is the underpinning of the Internet today, from the 1 billion traditional searches everyday on Google to providing references about a person on Twitter and delivering their stream feed on Facebook. Search has moved from simple page rank to an increasingly complex algorithm that weight’s social and semantic data points to deliver the outcomes most likely to please you. Personalization of search continues to evolve, but in turn it defines people and their choices.

Search — the technology itself — doesn’t bear responsibility for this. People do. People who use the Internet and its many free tools without understanding how the information is provided to them. They blindly accept search results or the search-based content feed without considering the source.

Consider the DecorMyEyes fiasco broken by the New York Times. Owner Vitaly Borker explained how he used intentionally created negative complaints about DecorMyEyes to game search results and place himself as a top ranked eyeglasses vendor. To Google’s credit, they promptly changed their algorithm to include more semantic weight (all negative or all positive disqualifying you), and the Department of Justice followed up with charges.

Social networks and applications also use search to source preferred content. Facebook’s activity feed is designed to source the most “interesting” content to people in your friends network are using the Open Graph API and likes. Search on Facebook is completely driven by the Open Graph (Like) protocol.

Of course, hashtags have demonstrated the power of search on Twitter. Twitter search was originally based on the acquired Summize search technology, and has been used to reference mentions and trends, too. Now Twitter (and other services) suggests people like you using semantic data.

The Danger of Homogeneous Definition 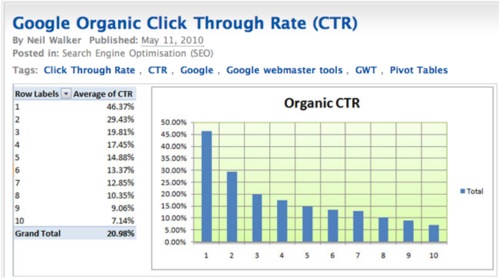 The danger in all of this personalized search — particularly when it’s largely based on peer interests — is creating a society of homogeneous sycophants that blindly accept the content sourced to them, either via search or feeds. Lest we think that people actually think through the click, consider organic click through rates on Google (as pictured above by SEO’s Neil Walker). Clicking through on the first few search terms is and has been the norm.

The addition of local semantic data to search only further complicates concepts of popularity. Algorithms tell people which burger joints, music venues, theaters, etc. are most likely to meet their interests.

When popularity is defined by an algorithm and served to people, homogeneos or mob thinking becomes the norm. This thinking feeds on the popular. Society is not currently trained to question the information presented to it. Thus algorithms — designed to create the output that will generate the most click throughs — become a critical determinant in defining people’s lives, and society as a whole.

That’s not necessarily a bad thing. Semantic information can weigh in when a system is gamed, and social search can provide the latest information based on people’s actual use and check-ins. However, idea markets are increasingly influenced by the popular, and not necessarily in a good way. Algorithms can keep bad ideas popular for longer periods of time.

It all points back to the need for society to teach better information skills. In an information economy, the ability to question and discern quality data presented via a plethora of media is an essential quality for democracy and individualism. It’s important to look deeper at online search, whether that’s because a search provided direct information or because an algorithm sourced a friend or influencer touting an idea or product. Quoting Doug Haslam, “Think for yourself. …you needn’t be part of some pack that can’t brook disagreement with your heroes.”

An educated Fifth Estate creates an evolutionary society, a mindless one creates results like Kim Kardashian as the number one search term on Bing for 2010. While many people find Kardashian attractive, should social semantic search tell every person — man and woman alike — what the icon of attractive is? Parents across America may object.

What do you think about how search and algorithms are defining our society?