The social media influence bubble finds its basis in measurement of inaccurate barometers. While one can use glittering generalities in defining influence — such as the ability “to cause desirable and measurable actions and outcomes” — in reality, those desirable actions are vapid benchmarks. Specifically, PR 2.0 measurements are participation oriented: retweets, impressions, follower counts, blog rankings, and other public measures of “conversation.”

Responsibility for the resulting social media bubble and the increasing demand for impact belongs to the PR industry in its 2.0 incarnation. It’s the same industry that during the 1.0 era relied on similar metrics, such as number of press clippings, impressions (sound familiar?), and the winner of all metrics, ad equivalency. Current PR definitions of success online will always be suspect, just as the industry’s prior metrics always led CEOs to question the value of public relations.

As the Harvard Business Review so adequately stated it, “‘social’ media is trading in low-quality connections — linkages that are unlikely to yield meaningful, lasting relationships.” PR 2.0’s popularity based metrics gauge attention, but not business actions. Common business actions include sales and brand reputation for companies, and donations and advocacy for causes. For that matter, current social media metrics fail to measure attitude (reputation), the hallmark of PR. 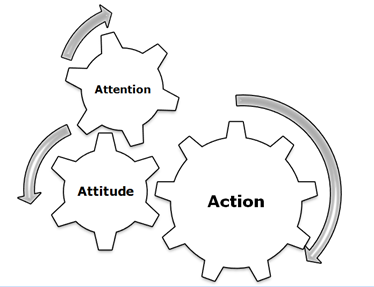 See Kami Huyse’s post on the the three As of measurement.

Like PR 1.0’s impressions, attention in social media has its value. There’s a reason why attention represents one of the three As. But it only represents a piece of the puzzle. Because inexperienced businesses and nonprofits were desperate to adapt they accepted the PR industry’s social media metrics as the answer. And as such, over-reliance on PR 2.0 metrics have created the increasingly discussed bubble.

Social media communications represents a confluence of disciplines, from the already discussed PR to advertising and relationship development (called business development, sales or development depending on the type of organization). Social can also include HR, customer service, etc., but from a pure marketing standpoint, these are the three primary internal disciplines. Traditionally, while all three intersect at times within social, advertising’s call to action and networking yield sales and long-term relationships. That doesn’t mean that advertising would have done a better job defining metrics. Pay per click, and more specifically the click through rate, still hang over the industry as debatable cost metrics for online properties. But advertising’s legacy is that a campaign works if sales increase. In the case of branding campaigns, advertising works if reputation and awareness increase. Advertising skills have their role in the art of getting people to the site, then getting them to commit to an action.

These people create, build and sustain critical relationships for years, even decades. Applied, development skills bring that irreplaceable relationship element to social media marketing and communications. Relationship development builds a sense of loyalty within a community. This extends beyond the momentary casual interaction to continued participation and actions over time.

To become more effective, social media metrics need to take into account the other marketing disciplines at play. That means measuring real actions such as sales/donations as well as reputation, advocacy and strength of community. A retweet algorithm won’t cut it, nor should a business or cause blindly accept attention metrics as the sole determination of program success.

What Will Happen When the Bubble Bursts Businesses and causes are already questioning the value of social media programs. Their highly touted Facebook fan pages and Twitter accounts aren’t answering the right kinds of questions about impact. Navigating truths and myths about disruptive communication technologies will force a much deeper level of accountability for communicators and other professionals using social tools.

This change in tone and accountability is already being felt. The recession is forcing organizations and companies to make their communications programs work correctly, or drop them altogether.

Unfortunately, the backlash towards attention based metrics could be severe. More and more voices are quick to cry smokescreen, and communicators who can’t navigate delivering hard business results will likely struggle. Claims of social media expertise may become a great big red flag, while understanding how to integrate and measure online communications within a larger marketing program will be a sought after skill set.

What would be unfortunate is if the backlash is too severe and swings completely towards sales goals without respect for relationships, or the necessary step of garnering community attention. As with most things in life, the middle road is the best course. Only time can tell what will actually happen.

What do you think of the social media bubble? Are PR 2.0 metrics and the organizations that accepted them to blame?